How Often Do People Clean Their Bedroom?

We surveyed over 1,000 adults to learn about people’s cleaning habits in their bedroom. 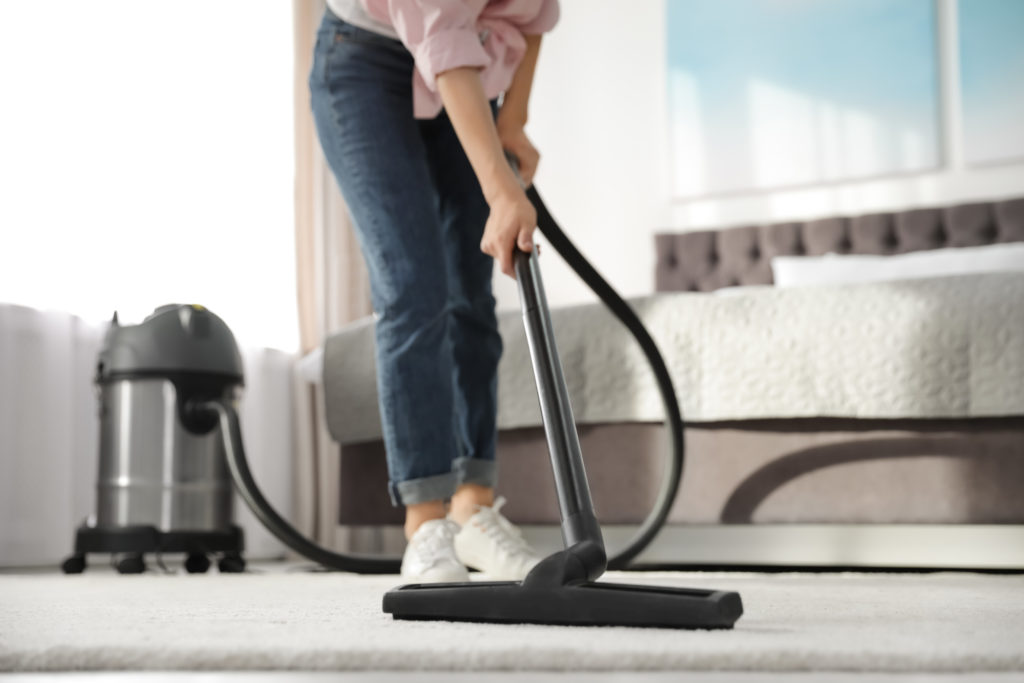 When it comes to cleaning, most people prioritize the most visible areas or those where lack of hygiene is just plain gross like the family room, kitchen, and bathrooms. But what about the bedroom?

Even though most of your guests will not be snooping around your bedroom and most of your time there is spent with your eyes closed, your bedroom is one more space that deserves your attention on cleaning day.

After all, we actually spend about one third of our lives in our bedrooms. One third! That means if you live to be 80 years old and sleep about eight hours each night, you will spend about 26 years sleeping, presumably in your bedroom. You’d think we’d do a better job keeping it clean. And yet…

Cleaning Habits in the Bedroom

We asked our respondents how often they clean various parts of their bedroom. The results showed that the average bedroom hygiene habits could use some work. 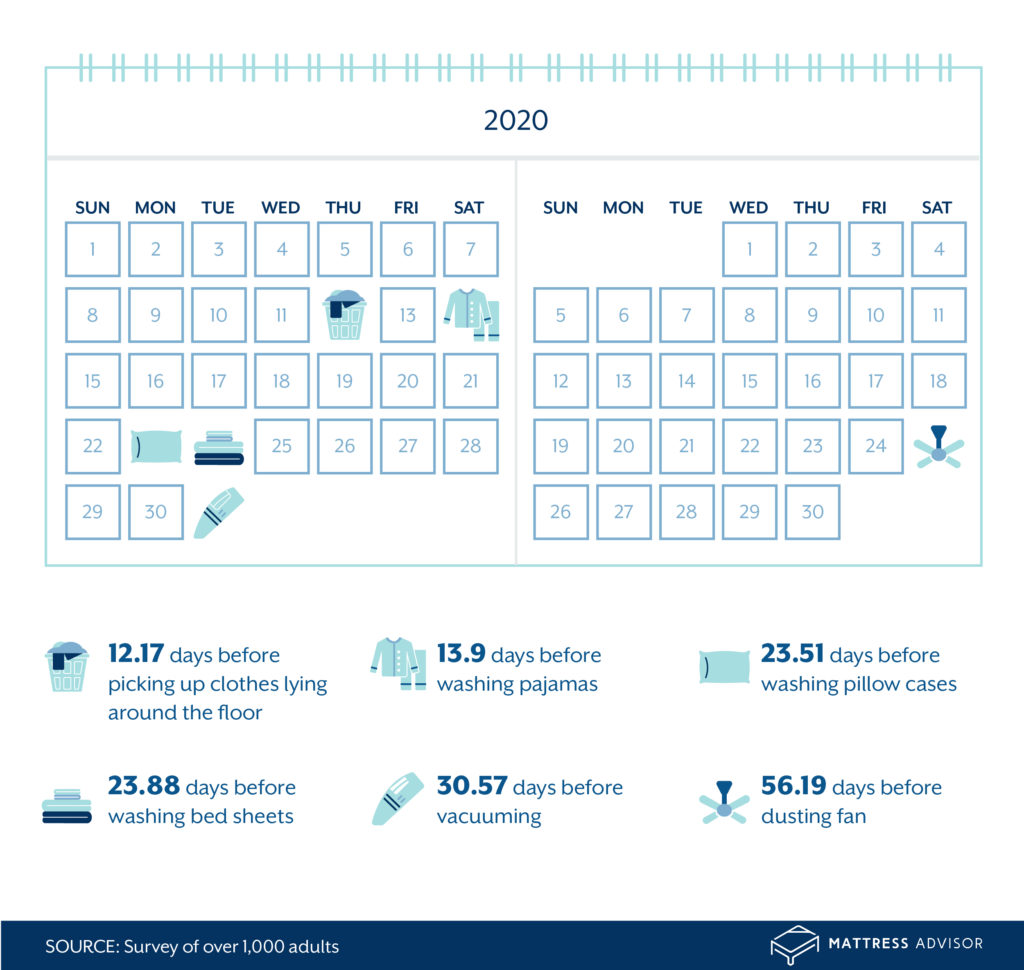 Almost two weeks stepping around dirty clothes on the floor? Vacuuming the bedroom only once a month? Pet hair and dander, your own dead skin cells, and dirt tracked in from outdoors will all be spread around your home if left to pile up on your floors.

And that’s just the stuff you can see. Dust mites and their feces (pooped out after feasting on your dead skin cells), mold spores, and bacteria can build up, causing illness and allergies. Freer breathing, fewer illnesses, and reduced allergic reactions all contribute to the improved sleep you’ll get if you keep your bedroom clean.

Respondents did no better on cleaning those bedroom items closest to their skin, changing their PJs only once every two weeks and their bed linens about every three weeks. Do you recognize yourself in these survey results? If so, listen up.

You might think the “no-one-sees-them-except-me” philosophy of cleaning gives you a pass on laundering your sheets and pillowcases frequently. Sadly, you’re mistaken. Home care specialists recommend washing your bed linens about once a week to help extend the life of your mattress and pillows, keep them healthy places to lay your head, and to help you sleep better.

Who has the Worst Bedroom Hygiene Habits?

Now, let’s take a look at who is worse about cleaning their bedroom by gender–men or women? Single or attached to an S.O.? The Silent Generation or Generation Z?

The average number of days men vs. women go before cleaning various parts of his/her bedroom

Overall, when you break out the survey results by gender, the male respondents pulled up the average number of days between cleanings of any item listed in the survey. In most categories, men waited almost a full week more than women before cleaning and picking up.

Hold on, ladies. Don’t get too smug: women participants didn’t do a whole lot better in keeping their beds and bedrooms clean, letting things slide anywhere from about two to three weeks. The whole “women-are-cleaner-than-men” stereotype may be true in general, but our results suggest women’s bedroom hygiene habits are nothing to brag about.

Take the issue of wearing PJs for as long as two weeks before washing for example. Maybe this practice arises from the mistaken belief that if it doesn’t look dirty, it isn’t. In fact, body oils, bodily fluids and sweat, odors, dead skin cells, and the dust mites that feast on them all collect on your pajamas, whether you can see them or not. That’s why hygiene experts recommend changing pajamas after every wear. Looks like some people will need to buy a few more sets of PJs. 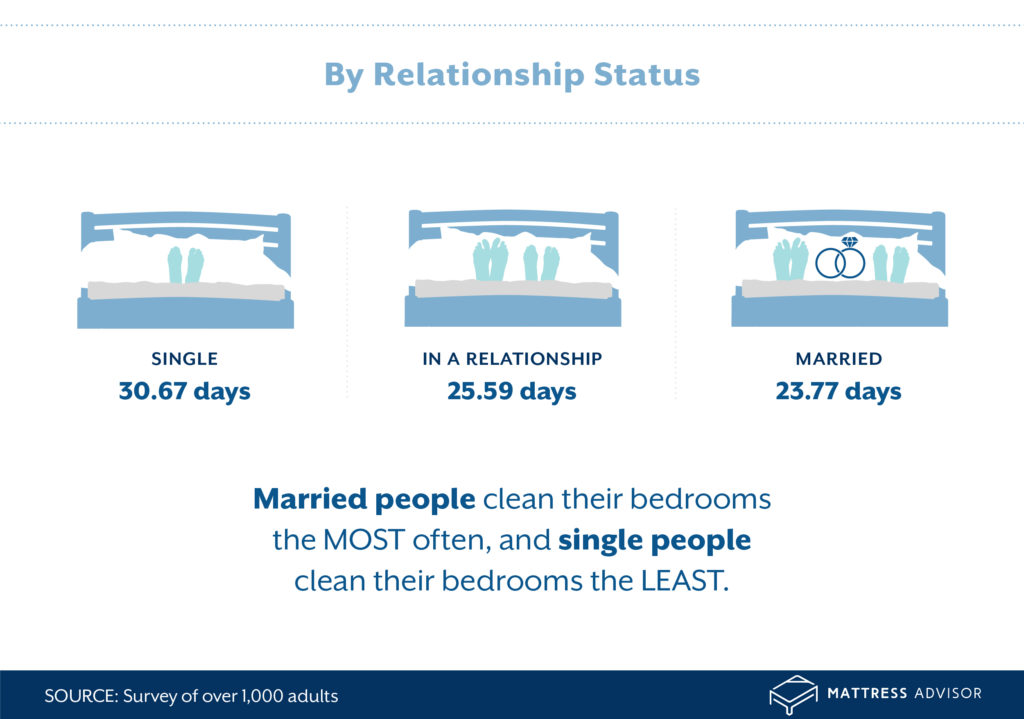 According to our survey, people’s bedroom hygiene levels are correlated with their level of commitment to a significant other. Married people clean their bedrooms a full week more frequently than singles and a few days more frequently than people who are in a romantic relationship.

While it may seem that singles can get away with less frequent vacuuming and washing because there’s no one around to see the mess, the fact is that germs, dust, and dirt build up in bedrooms and on bed clothes whether you live by yourself or not. And the health risks these build-ups pose is the same whether you face them alone or with a partner. 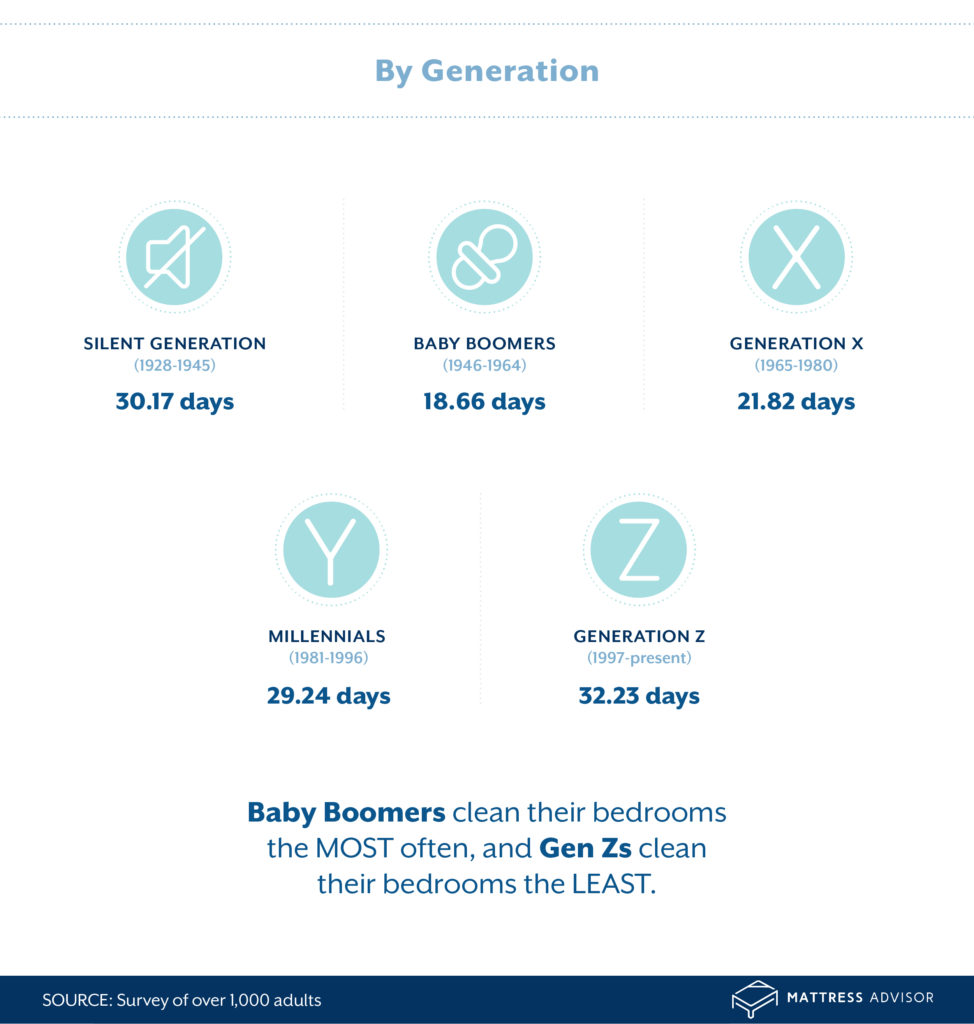 We found that the youngest participants and the oldest ones clean their bedrooms and bed linens the least, waiting about a month before biting the bullet and cleaning up. I’m going way out on a limb and guessing that the reasons for their nonchalance about bedroom hygiene are very different.

It’s too physically exerting for members of the Silent Generation (74 to 91 years old) to clean frequently, and Zoomers (ages 22 and younger), well, they’re still pretty young and just starting out on their own or on the verge of doing so. They haven’t settled into a cleanliness routine. Both groups get a pass.

Baby Boomers (55 to 73 years old), who were raised and trained by the Silent Generation, clean their bedrooms and the items in them most frequently averaging about 18 days between cleanings. (That oft-neglected ceiling fan raised that average by about 6 days, so minus that, they are cleaning their bedrooms a healthy two times a month.) Presumably, the Silent Generation folks were more fastidious in their younger years and passed on their good hygiene habits to their kids, even as they had to relinquish them as they aged.

The average times between bedroom cleanings get longer as the generations get younger, starting with Gen Xers (ages 39 to 54) who are so busy raising families and maintaining their careers long enough to pay for their kids’ college educations, they don’t have the time or energy to clean their bedrooms.

Millennials (23 to 38 years old) are just settling into their careers and other life choices, so cleaning takes a backseat for many of them. It seems that regardless of age, people in general are either too tired or too busy to prioritize bedroom cleaning.

Just in case you’re thinking, “Well, maybe those survey respondents just keep their bedrooms clean without vacuuming and changing their bed sheets,” we asked them if they prevent spreading outdoor dirt and bacteria by taking off their shoes and if they eat food in bed.

Here’s what we found. 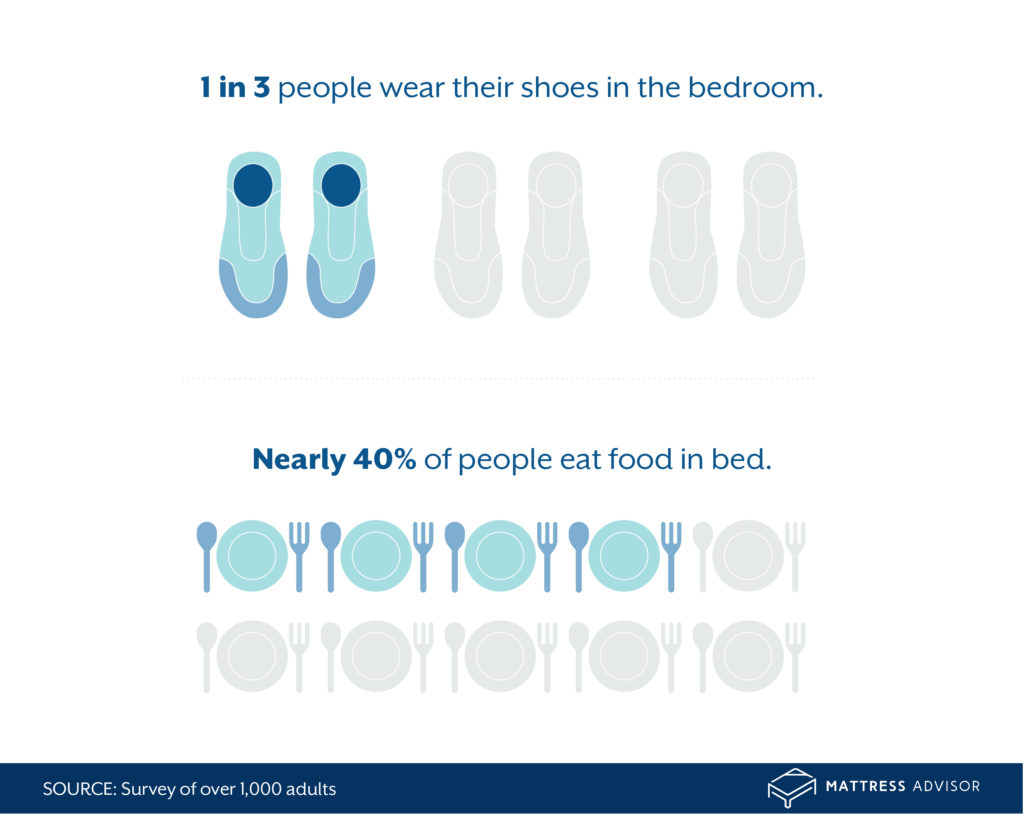 While the majority of respondents reported taking off their shoes in the bedroom and refraining from eating in bed, nearly 40% of people do eat in bed and about 33% do not remove their shoes before entering their bedroom. If there were ever reasons to vacuum frequently and change your sheets weekly, these are the reasons!

Dr. Charles Gerba, a microbiologist and professor at the University of Arizona, researched the amounts and kinds of nasty things that we track in our homes on our shoes. He found that the average shoe contains 421,000 units of bacteria including E. Coli, Klebsiella pneumonia, and Serratia ficaria, all of which can cause dangerous infections.

Wearing your shoes in your bedroom means that when you walk around in your PJs and bare feet, those bacteria are winding up on your bed sheets, and since, according to our survey, lots of people are not washing their sheets often, they are sleeping with a bunch of those nasty microbes for weeks at a time. Talk about strange bedfellows!

Our survey revealed a number of alarming results about people’s bedroom hygiene habits (or lack thereof).

In summary, our survey indicates:

In light of how important the cleanliness of your bedroom is, you might agree that we could all do a better job of cleaning our bedrooms. Consider devoting just one hour each week, maybe on the weekend, to picking up the pile of clothes on the floor, changing the bed sheets, and vacuuming around the bedroom. Oh, and don’t forget the ceiling fan. Your respiratory and immune systems will thank you and you’ll sleep better at night. Win-win-win.

We surveyed over 1,000 adults on the Amazon Mechanical Turk program to learn how often people clean various parts of their bedrooms. We then segmented the data by respondents’ self-reported demographical information.

If you want to share this content with your audience, you’re welcome to do so. Simply provide a link back to this page to credit us appropriately. 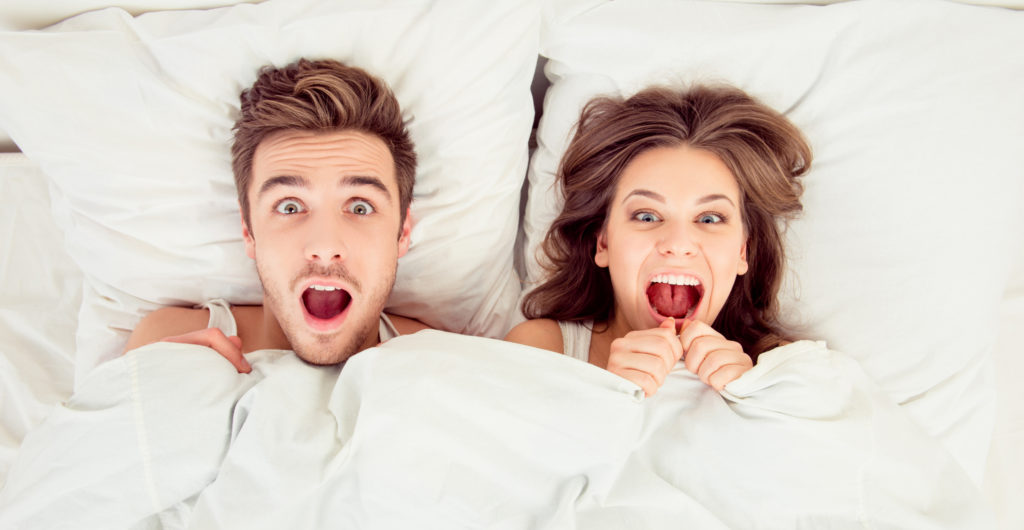 Take a look at how often Americans change their bedding: what motivates them to sleep clean and what's their threshold for going "unwashed"? 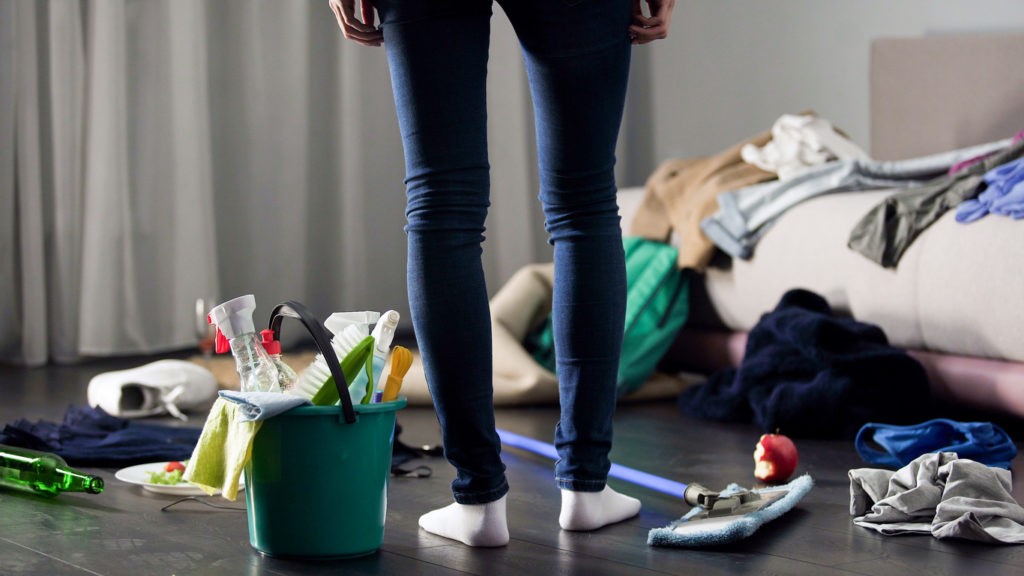 We surveyed over 1,000 college students to see how clean they keep their bedrooms. Keep reading for the answers. 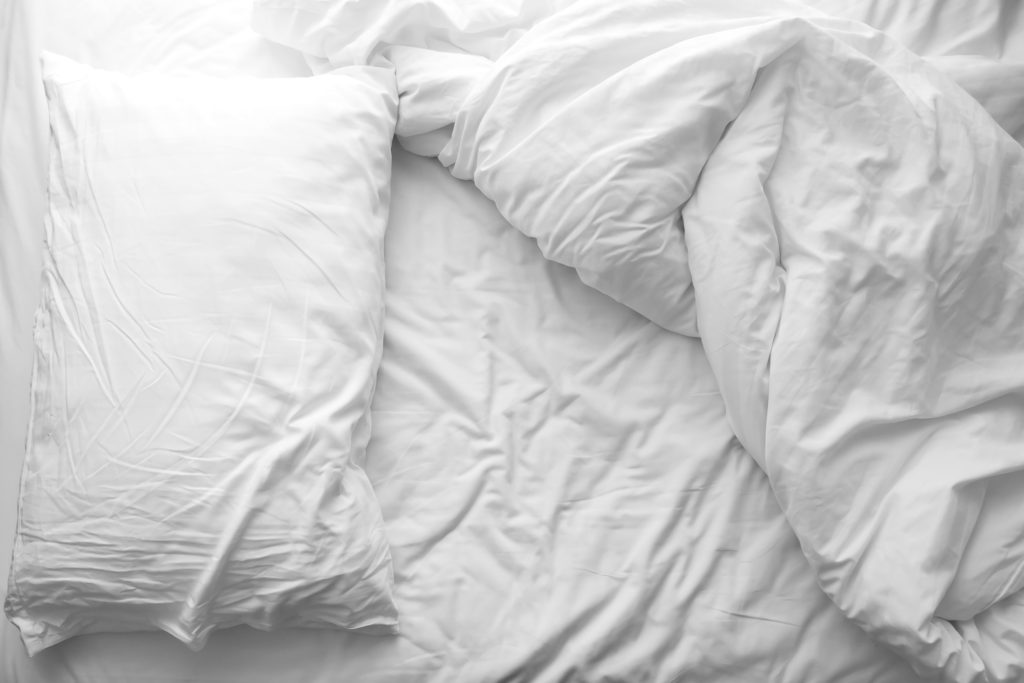 How to Clean and Remove Stains from Your Mattress

Getting on a regular cleaning schedule for your mattress can make a big difference in your sleep quality. Read these tips for making your mattress a cleaner, healthier and more comfortable place to sleep.