Does Your Personality Influence Your Bedtime Habits?

We surveyed over 1,000 Americans to see what they do before going to sleep

While sleep is a need shared by all human beings, our preparations for it differ wildly. Some folks practice a rigid routine at bedtime, carefully choreographing the steps they take before they crash. Others are more casual about the way they doze off, passing out while binge-watching their latest Netflix obsession. As with many of our patterns, it’s hard to attribute any real rhyme or reason to how each of us approaches our slumber.

But what if these bedtime behaviors revealed deeper truths about our nature? We set out to find correlations between personality traits and bedtime habits to learn how our dispositions might dictate how we seek shut-eye each night. To do so, we administered a modified version of a four-letter type personality test to over 1,000 Americans, then asked them about their bedtimes routines. Our findings reveal how specific traits (such as extraversion or an analytical orientation) correlate with certain techniques to achieve sleep – from meditation to medication. How might your personality relate to your bedtime routine? Read on to find out.

In the pursuit of sound slumber, one common relaxation tactic was intoxication: Extroverted respondents consumed wine or hard liquor before nodding off 6 percent more often than introverts. Extroverts also took baths before bed to a greater extent – perhaps with a glass in hand.

The greatest differences between introverts and extroverts emerged around more vigorous bedtime activities. Extroverts exercised before falling asleep 9.3 percent more often, but they also relished another kind of late-night physicality: sex. Outgoing people reported getting intimate before bed 11.6 percent more often than their introverted peers. Studies show that people with outgoing personalities tend to get more action in the bedroom. This has shown to be particularly true of extroverted women – who claim to have sex twice as much as their introverted counterparts. 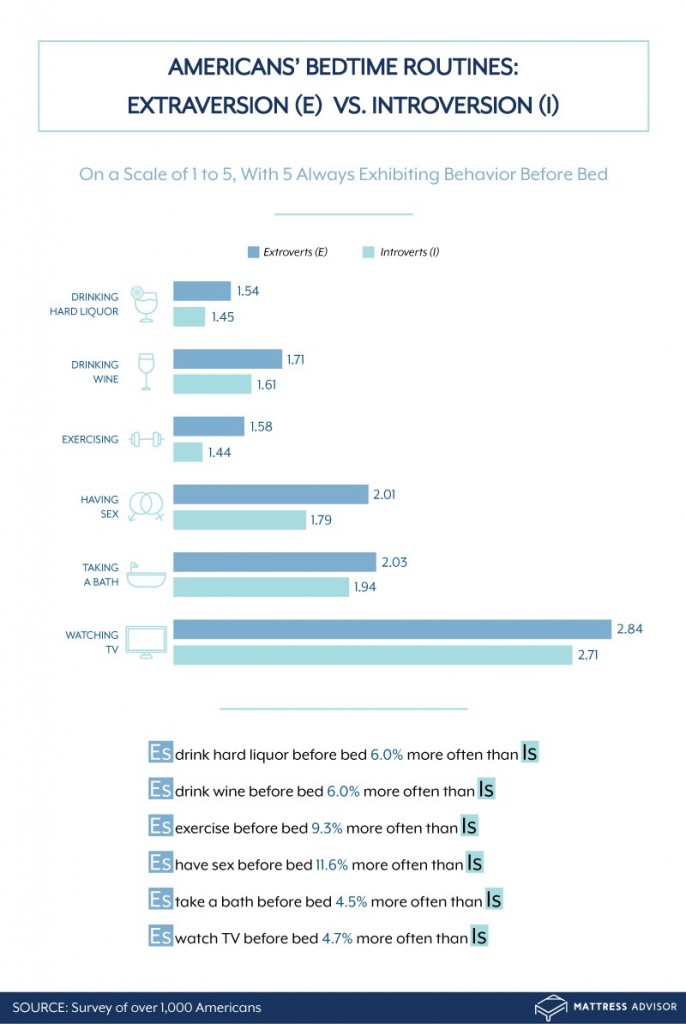 Intuitive types were more artistically inclined before sleep – they listened to music and read with greater frequency. They also practiced meditation more often as a part of their bedtime routines – a mind-clearing feat that sensing types might find more challenging. However, body-scan meditation before bed has been shown to counteract insomnia and improve sleep quality overall. This process of intentionally perceiving minor sensations throughout the body seems well-suited to the sensing personality. 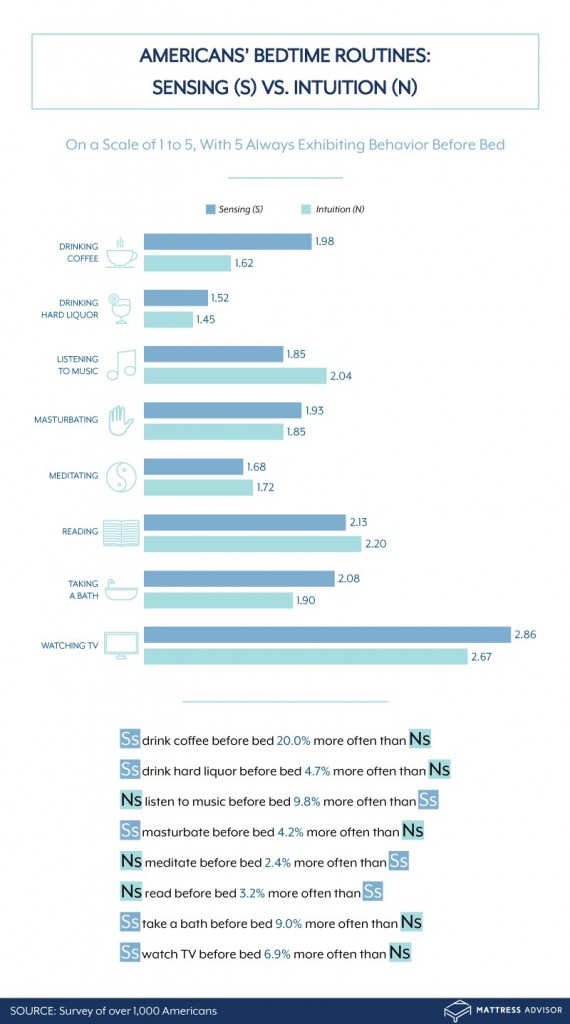 Thinking types are most comfortable reaching conclusions through objective evaluation, while feeling individuals value personal beliefs more heavily. However, in terms of their approaches to achieving sleep, both had bedtime routines that were relatively similar. According to our data, feeling people took baths before bed slightly more often, and they also watched television before nodding off 4 percent more frequently. When it comes to viewing habits, feeling personalities may put less stock in objective data suggesting that TV before bed adversely affects sleep quality.

Thinking people reported meditating a bit more often, a practice that could prove helpful in calming minds that are always calculating. But the biggest difference between these types concerned a beverage: tea. In fact, feeling respondents drank tea before bed 11.2 percent more frequently. In this respect, the feelers may actually have science on their side. Many herbal teas have been correlated with better slumber, among other healthy effects such as lowered blood pressure. 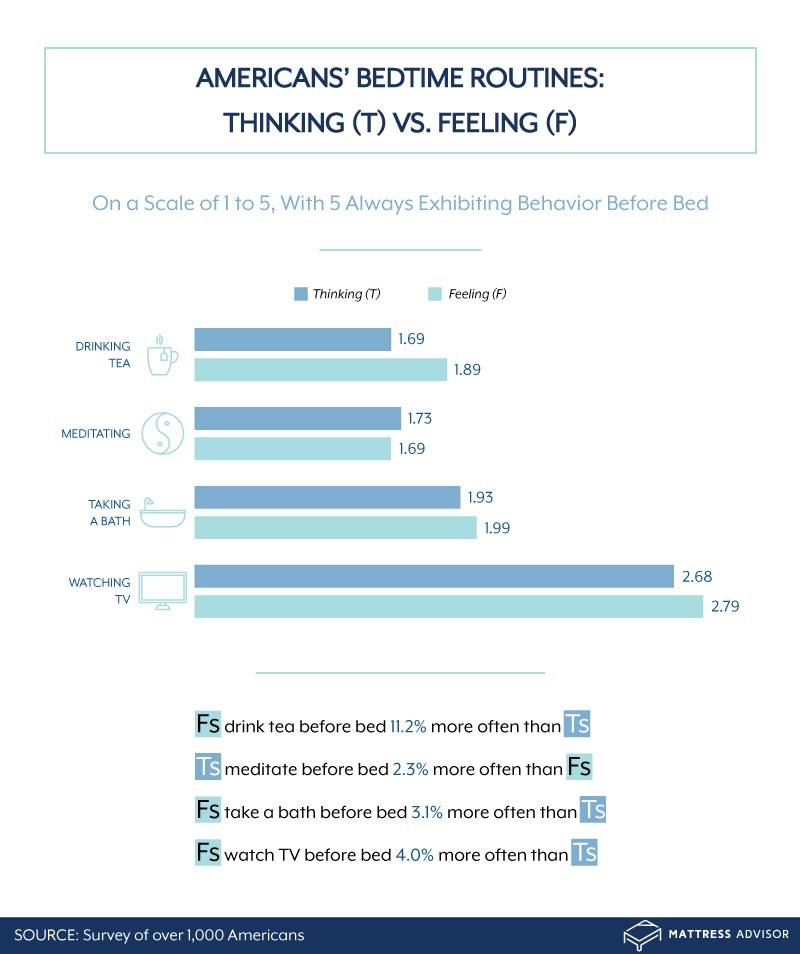 The next major personality trait comparison distinguishes perceiving people from judging ones. The latter isn’t synonymous with “judgmental,” but rather describes an orderly, decisive approach to life’s choices. Perceiving people are more flexible and spontaneous in response to new information, which may explain their inclination to all kinds of sensory inputs before bed.

Perceivers were much more likely to indulge in booze before sleep, drinking beer 11.6 percent more often and hard liquor 5.4 percent more frequently. They masturbated before bed with greater frequency as well. Perceivers were also slightly more inclined to work directly before shutting down for the day, a habit that might compromise their sleep quality. While research suggests bringing our laptops to bed is detrimental to our rest, perceiving types may have difficulty pausing work when inspired. 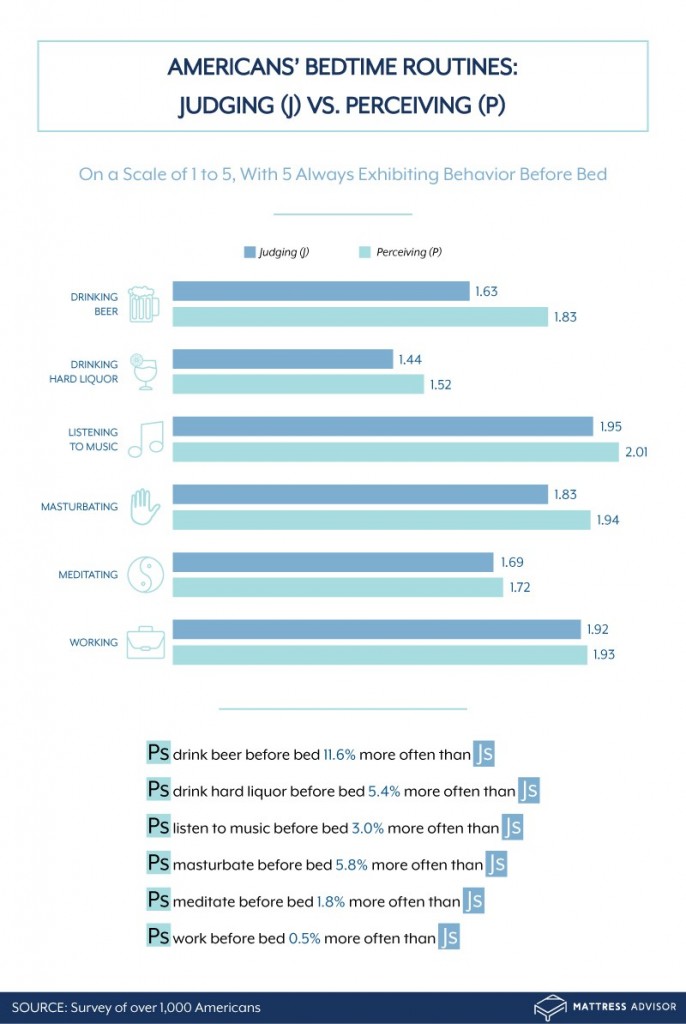 In addition to these individual traits, four-letter personality type describes holistic personalities, which are the sum of where individuals fall on four main personality spectrums. While our data show many personality types employ pre-bed routines that correspond to their traits, others choose methods that might counteract the difficult parts of their natures. Logisticians, for instance, appease their tireless and practical nature with hard liquor. Meanwhile, Entertainers unwind from their penchant for performance with a bath most often (although perhaps the shower affords them the chance to sing for an imagined audience).

For some personality types, however, their actions before sleep were more predictable. The spontaneous Campaigner was the least likely persona to have any bedtime routine at all, while the dedicated and efficient Executives read and worked most often before nodding off. Other types had seemingly inexplicable tendencies. The Consul, defined by a preference for harmony in their environment and relationships, drank coffee before bed most often – an incongruous choice in sleepy circumstances. 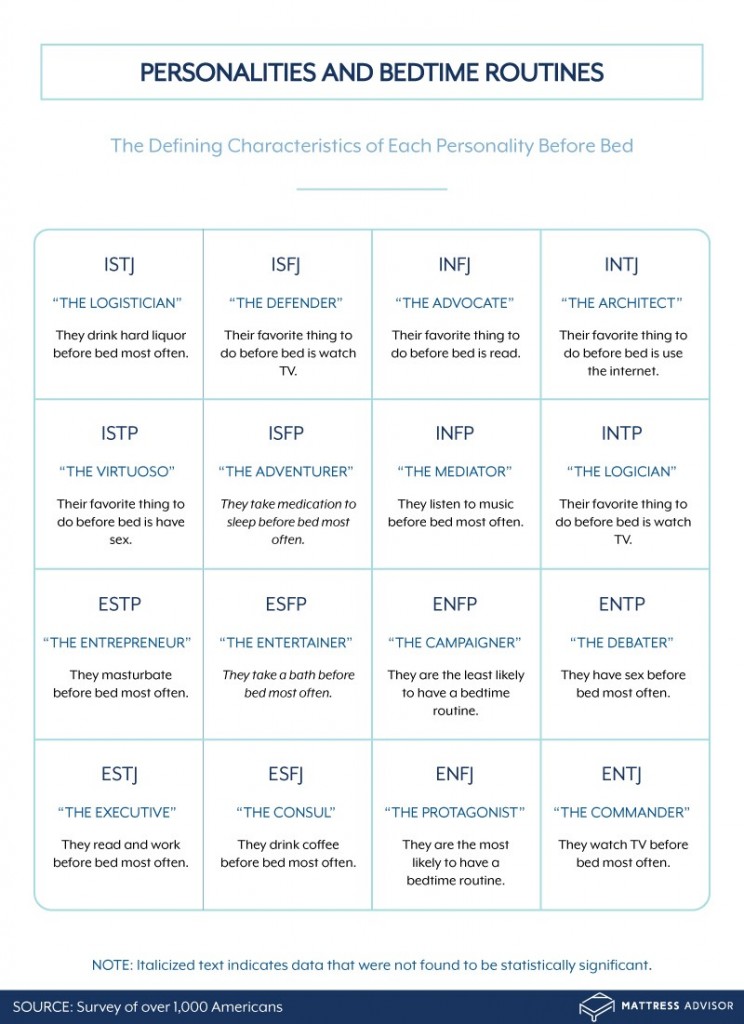 Better Sleep for Every Soul

While our results reveal just how varied our bedtime routines can be, no personality can forego much-needed rest for very long. Whichever ritual you use to doze off more easily, improved sleep will bring out the best of your unique disposition – just as fatigue will likely highlight those less favorable parts of your character. If you’re looking for a pre-sleep process that really works (or a healthier alternative to what you do already), take a look at these tips for getting better sleep. Deep sleep pays big dividends, for your happiness and health.

The proper conclusion to any bedtime process is crawling into a comfortable mattress; without one, no sleep routine will work very well. That’s where Mattress Advisor can save the day (or night), with comprehensive reviews and recommendations of the latest in sleep products and technology. We’ve got the right mattress for any budget – and personality.

We collected data from 1,021 Americans from Amazon’s Mechanical Turk. We administered an adapted version of the four-letter type personality test and used respondent answers to identify their preferences and personality types. We then asked a series of questions related to what they did before bed to produce the findings described. Hypotheses were then statistically tested.

If you’d like to share our findings and images with your own audience, you’re welcome to do so. We simply ask that you attribute Mattress Advisor for our work by providing a link to this page. Not crediting us fairly would keep anyone up at night – no matter his or her personality type. 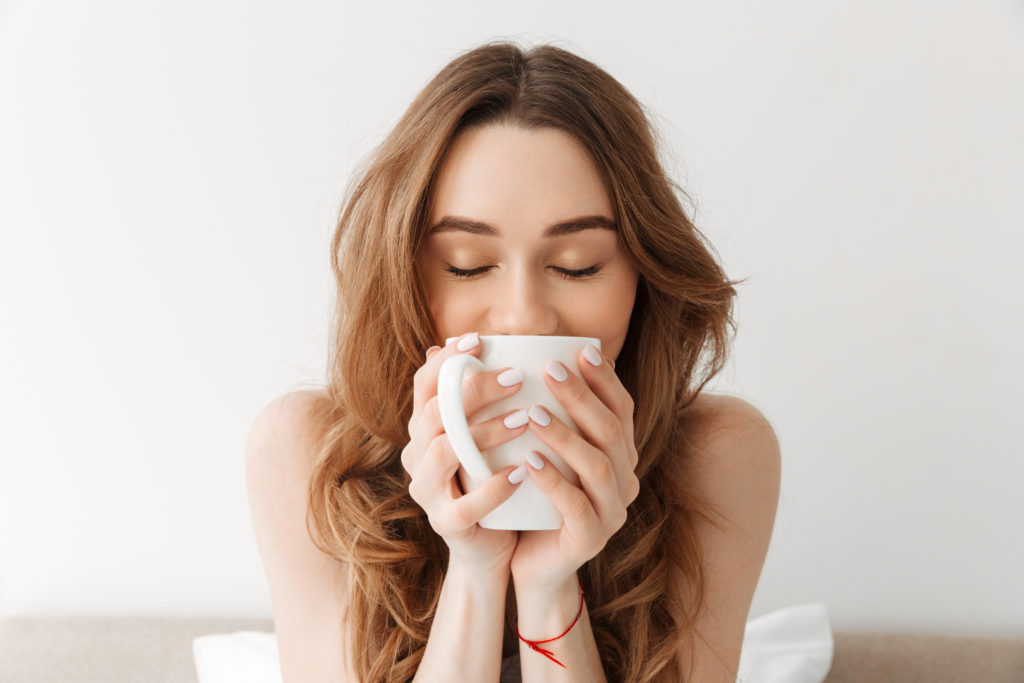 Bedtime teas are a great natural remedy to sleep. Learn here which herbal teas are the best at promoting restful sleep. 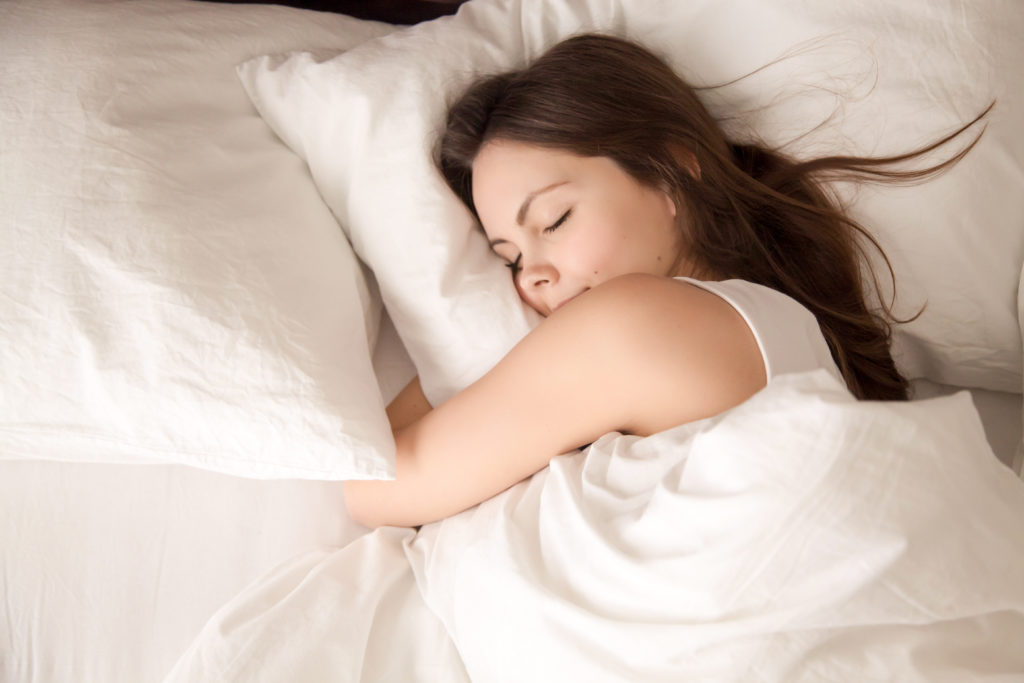 Do you have trouble falling asleep or sleeping through the night? Follow these 5 steps to help control your environment for optimal sleep.