Binge-watching Is Ruining Your Sleep

New research shows that binge-watching is contributing to the sleep crisis in America. 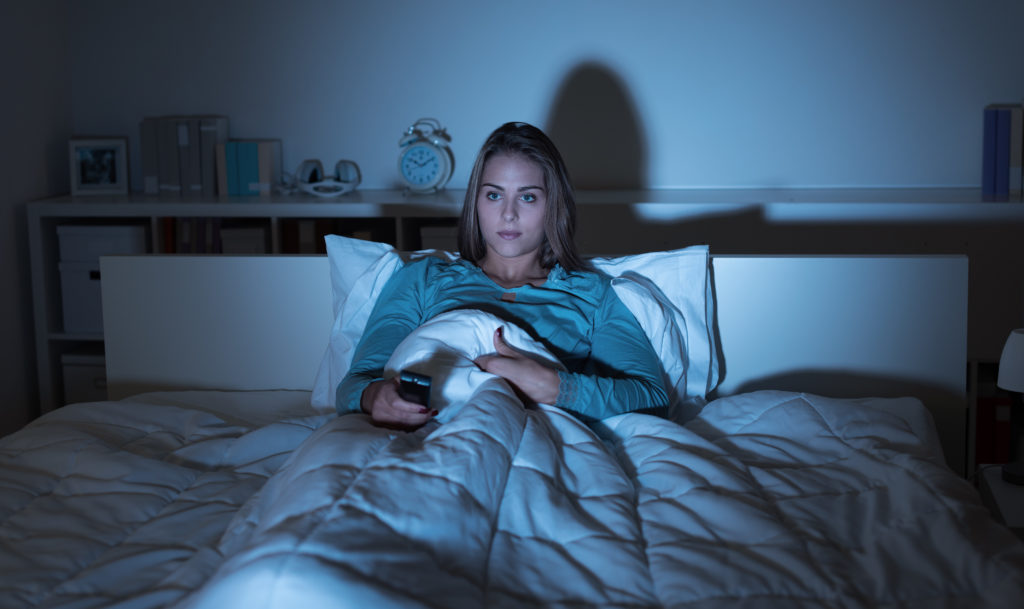 If you’re an adult American and own a TV or computer, there’s a good chance you stayed up too late last night to binge on a steady stream of your favorite series. According to a new survey by the American Academy of Sleep Medicine (AASM), 95% of respondents aged 18 to 44 admitted they lost sleep because they were engrossed in watching episode after episode of a favorite TV show or streaming series. (Succession, anyone?)

Older and wiser Americans in the survey didn’t fare much better. Eighty-eight percent of survey respondents reported they, too, sacrificed sleep because they had a hard time pulling themselves away from the bounty of TV options available.

The survey uncovered other sleep snatchers that lure their prey away from Snoozeville. 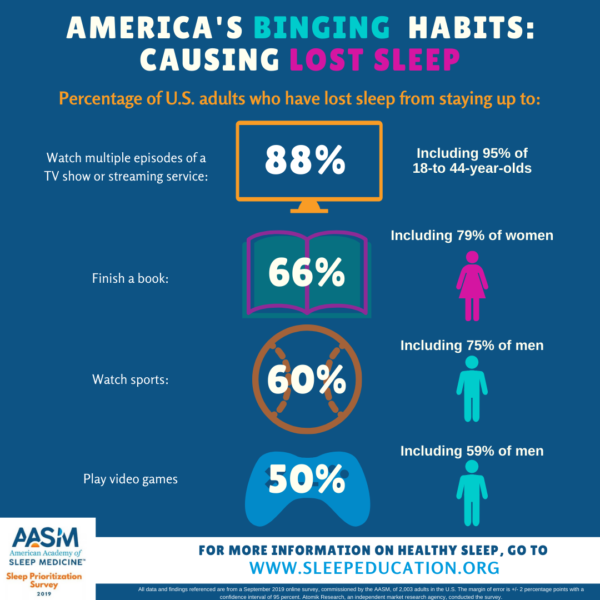 Ironically, Americans demonstrate this cavalier attitude towards sleep at the same time they rank sleep as their second highest priority after their families. So, what’s going on here?

Why We Can’t Control Our Binge-watching

It’s not really your fault you can’t stop watching your favorite shows. Your brain is wired to seek out this alluring indulgence. The entire time you’re enjoying a TV show, your brain is producing dopamine, a “happy hormone” that triggers the reward center of your brain. This same process occurs any time we experience a pleasurable activity and is part of the mechanism that causes addictions. Seeking more reward, your brain basically compels you to do more of whatever it is that stimulates dopamine production, in this case watching more and more episodes of your favorite series.

Clinical psychologist Dr. Renee Carr tells NBC News that while you binge on TV, “your body experiences a drug-like high. You experience a pseudo-addiction to the show because you develop cravings for dopamine.” The fact that subscription streaming services as well as cable TV marathons make it so easy to continue this pleasurable activity without interruption makes binge-watching as irresistible to viewers as heroin is to an addict.

It’s All in Your Head

As if that weren’t enough to keep you watching, there are psychological reasons we become addicted to our favorite TV shows. “Bingeable shows often have a complex narrative structure that makes viewers become completely immersed into the story,” said Jan Van den Bulck, professor in the Department of Communication Studies at the University of Michigan in Ann Arbor.

A complex narrative populated with a cast of alluring characters creates an imaginary world that draws viewers in. When we watch such a show, the areas of our brains that are activated are the same as those triggered when we experience a real event. Psychiatrist Gayani DeSilva tells NBC News that we “become attached to characters and truly care about outcomes of conflicts.” Forming a bond with characters makes us more likely to watch past our bedtimes because we need to know what happens to them in the end, much the same as we want to know what happens to our friends facing challenges.

Finally, this total immersion in a fictional world helps many people forget about the stressors in their real lives, making binge-watching a form of stress management. But it has its drawbacks, especially when it comes to sleep.

Having fewer hours left for sleep is not the only consequence binge-watchers face. Binge- watching also leads to diminished sleep quality, more fatigue, and increased insomnia, according to a new study published in the Journal of Clinical Sleep Medicine. Binge-watchers face a 98% increased likelihood of experiencing poor quality sleep compared to people who do not identify as binge-watchers.

“We found that the more often young people binge-watch, the higher their cognitive pre-sleep arousal,” said principal investigator and lead author Liese Exelmans, a doctoral candidate in the School for Mass Communication Research at the University of Leuven in Belgium. “That in turn negatively affected sleep quality, fatigue and insomnia.”

And since binge-watching occurs not just on TVs but also laptops, computers, smart phones, and tablets, viewers get bombarded with blue light, which delays the release of sleep-inducing melatonin, making it less likely they will feel sleepy. When they finally do tear themselves away from their devices, the disruption in their melatonin production makes it harder to fall asleep and disturbs their sleep stages through the night.

Calling a Truce on the Battle between Sleep and Binge-watching

Sleep and TV binging doesn’t have to be an either/or proposition. There are strategies you can implement to make streaming your favorite series less detrimental to your sleep. The American Academy of Sleep Medicine offers these suggestions:

You’ll note that you still need to have the willpower to turn off the TV when it’s time to go to bed. That’s a struggle made a little easier when you know how important sleep is to your health and well-being. And while we invite you to binge-read at Mattress Advisor, we still encourage you to go to bed on time.