The science behind how caffeine affects sleep, and how you can manage its impact

You know the feeling – you’re exhausted and can’t wait to pass out for the night, but suddenly you find yourself tossing and turning without end. Your mind is racing, you can’t get comfortable, and you definitely can’t fall into a deep sleep. Your mind is on high alert and you can’t figure out why – that is until you remember that 5 p.m. mug of coffee you downed in hopes that it would help you power through the final leg of your workday.

If this scenario sounds familiar, you’re far from alone. It turns out caffeine is one of the most common culprits to a disrupted night of rest. Read on to learn how caffeine affects sleeping patterns, and how you can adjust your own eating and drinking habits to get a better night of sleep.

How does caffeine affect the body?

One of the most important things to understand about caffeine is that it’s a stimulant to the nervous system, meaning it increases energy and alertness and can simultaneously be disruptive to sleep. And there’s a fairly straightforward scientific explanation for it.

How much caffeine is OK?

The Mayo Clinic recommends keeping caffeine consumption to 400 milligrams or less each day. On average, most Americans consume around 300 milligrams of coffee per day. Typically, one cup of coffee has somewhere around 100 milligrams of caffeine, though the amount can be higher or lower depending on the source. Many servings dished out at common coffee chains are far larger than one standard cup, and therefore have far more caffeine.

Because the effects of caffeine are different for everyone, some people might experience sleep issues after drinking just one cup per day, whereas another person can sip a late afternoon coffee and still rest easy.

It’s important to realize that coffee isn’t the only caffeine source that’s going to keep you up at night. You’ll take in about 50 milligrams of caffeine in a cup of black tea, and about 75 milligrams in a 20-ounce bottle of Diet Coke. And that’s just drinks – many foods contain caffeine as well, but we’ll get into that later.

When is it OK to consume caffeine?

Something to keep in mind about caffeine is that while you’ll feel its initial effects within 30-60 minutes, it takes quite a long time to break down and leave the body. Caffeine has a half-life of around 5-6 hours, meaning that it takes most people five or six hours to work half of the stimulant through their system. So if you drink 100 milligrams of caffeine at 5 p.m., 50 milligrams could remain in your body at 10 p.m. And though half the caffeine is gone, it could still act as a stimulant, making it hard for you to fall asleep (and stay asleep) when that’s what you need the most.

Because caffeine metabolizes differently from person to person, recommendations for what time of day to stop consuming caffeine vary significantly, anywhere from between 4 hours and 11 hours before bed. One study found that consuming 400 milligrams of caffeine zero, three, and six hours before bed was disruptive to sleep in all cases.

Overall, caffeine consumption tends to be an endless negative cycle – you wake up tired so you have some caffeine. Then you’re rewarded with a feeling of alertness and a rush of dopamine that makes you feel good. Later you experience a crash, leading you to crave more caffeine. Eventually, the effects of caffeine and its long half-life impact your sleep cycle by disrupting your ability to fall into a deep sleep, leading you to feel tired in the morning and once again crave caffeine. The cycle continues.

In addition to sleeplessness or restlessness, caffeine can sometimes lead to other side effects such as nervousness, muscle tremors, upset stomach, heart palpitations, increase blood pressure, frequent urination, and anxiety.

Check out this infographic by Healthable to learn more about the pros and cons of coffee consumption. 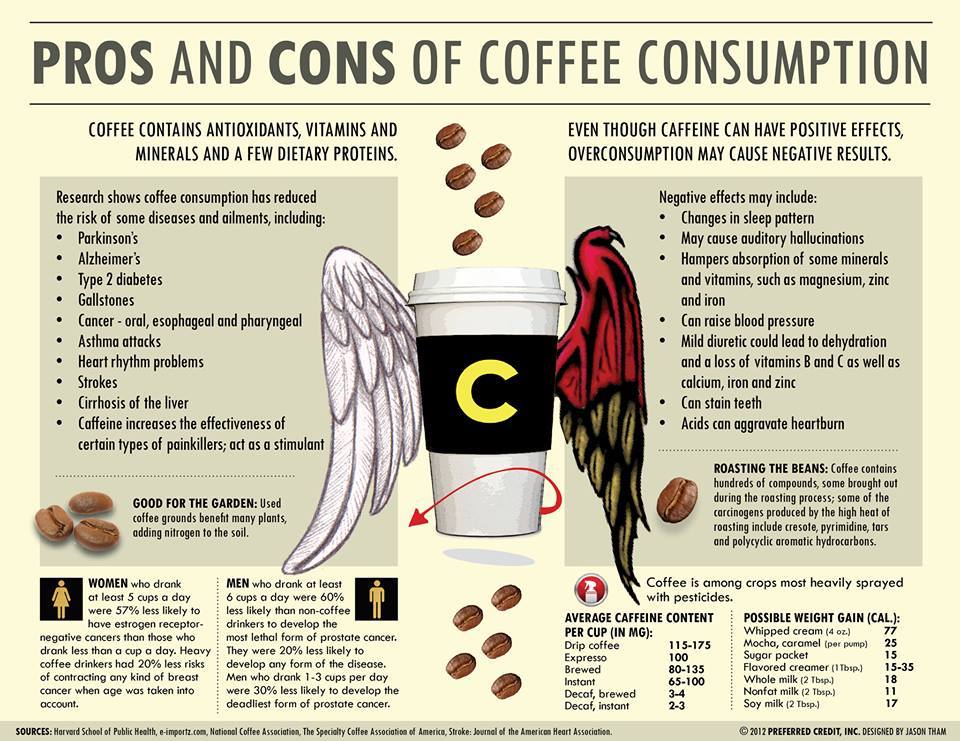 What can you do about caffeine’s affect on your sleep?

If you suspect caffeine is disrupting your sleep, it might be a good idea to cut back. (Easier said than done, we know.) This can be accomplished by consuming less caffeine, moving your caffeine cutoff point to earlier in the day, or both. An important step in cutting back on caffeine is knowing what foods and drinks contain caffeine, and in what amounts. You might think you’re in the clear by avoiding coffee in the afternoon or evenings, but it turns out caffeine can be found lurking in tons of foods and drinks, some far more obvious than others. It’s important to check carefully to see if an item contains caffeine. For example, just because a tea is fruit-flavored doesn’t mean it’s an herbal variety.

If you do decide to cut back on caffeine, do so gradually (eliminating around 40 milligrams per day can be a good starting point) and consider consulting your doctor for guidance. Many people experience withdrawal symptoms like headaches, fatigue, muscle pain, and difficulty concentrating upon eliminating some or all of their typical daily caffeine intake.

Of course, it’s also crucial to make sure you know what’s in the food you’re eating. You can use this handy USDA database to check the caffeine content of specific foods. Other fairly simple and straightforward ways to cut back are to avoid chocolatey items, avoid packaged foods that market energy-boosting properties, and swap coffee and caffeinated tea for herbal tea, decaf drinks (keeping in mind that these can sometimes still contain trace amounts of caffeine), and consider sipping something like hot lemon water.

HERE ARE A FEW COMMON CAFFEINE CULPRITS TO LOOK OUT FOR:

Coffee has around 100 milligrams of caffeine per cup, though this can vary in intensity from one coffee to another depending on the beans used, how it was brewed, and other factors.

Even decaffeinated coffee contains small amounts of caffeine, so keep this in mind in the evenings and remember that it’s best avoided if you’re one of those people who are particularly sensitive to caffeine.

Hot cocoa has between 5 and 25 milligrams of caffeine per cup, which might seem like a small amount, but hot cocoa often has a high sugar content that when combined with caffeine keeps many people awake at night.

Tea has more caffeine than many people think. One cup of black tea has about 55 milligrams of caffeine, green tea has slightly less, usually falling around 45 milligrams or so per cup. Herbal teas generally have no caffeine and are a good swap here if you’re looking to cut back.

Coffee-flavored ice cream and yogurt usually has around 30 milligrams of caffeine per serving, though the exact amount will vary by brand. And keep in mind that people rarely stick to just one serving of ice cream.

Many packaged foods with labels that promote “energy” or “energy boosting” actually contain caffeine. Keep an eye out for this sneaky source of caffeine as you shop for oatmeal, nuts + seeds, energy bars, and other packaged items.

Marathon runners, triathletes, and other endurance athletes often take gels and liquids in order to refuel their bodies during intense and long bouts of exercise. Many of these liquids and gels contain 50-100 milligrams of caffeine for an added energy boost, so keep this in mind when purchasing, especially if you don’t want to mix caffeine with your workout, or if you’re working out in the afternoon or evening.

Reducing or eliminating caffeine from your diet can sound near impossible. But consider the benefits, including more restful sleep, if you commit and power through any initial hurdles.

Has your sleep been affected by the power of caffeine before? How did you deal with it? Let us know in the comments below! 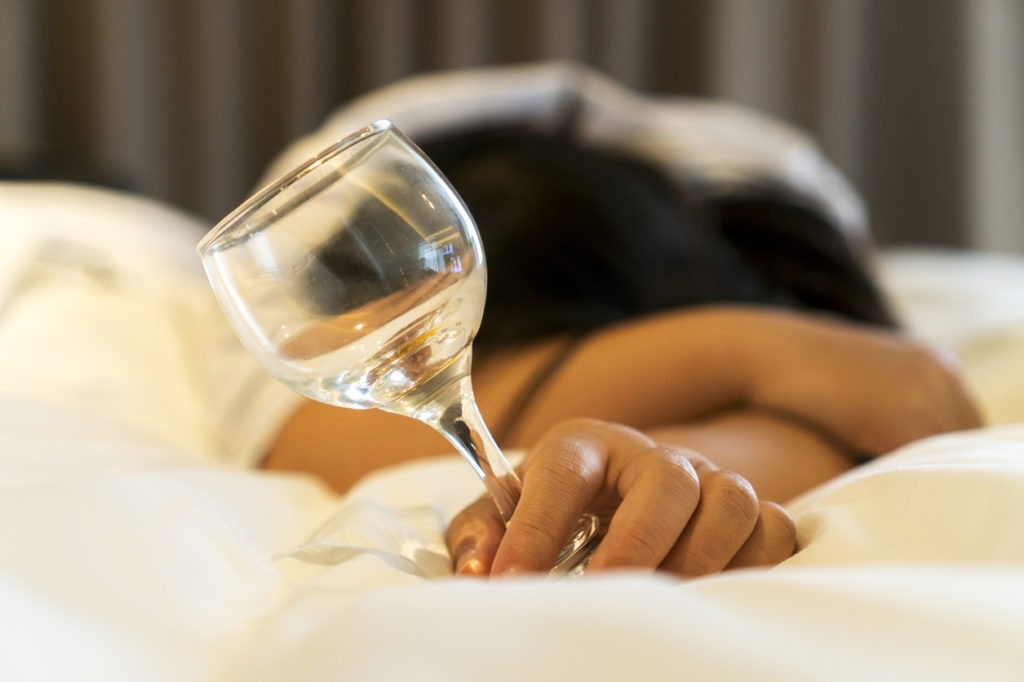 A beer or glass of wine before bed feels like it helps you sleep, but it may do more harm than good. Read about the interaction between alcohol and sleep, and what you can expect after ending your night with a drink.

What are binaural beats and how can they help you sleep better? Read this guide to see if this could be a simple solution for better sleep.