What Would You Give Up For Better Sleep?

We asked over 1,000 Americans what they would give up for better sleep, and how much sleep they’d give up for a better life

Millions of Americans have trouble sleeping. In fact, the Cleveland Clinic estimates that 70 million Americans fall into this category. Troubled sleep can range from tossing and turning on your mattress to severe insomnia, but once you’ve gone through a night with subpar sleep, you’d probably do anything to avoid it again.

But just how far would people go to get a good night of sleep? We surveyed over 1,000 sleep-deprived Americans to find out. Read on to see what they said. 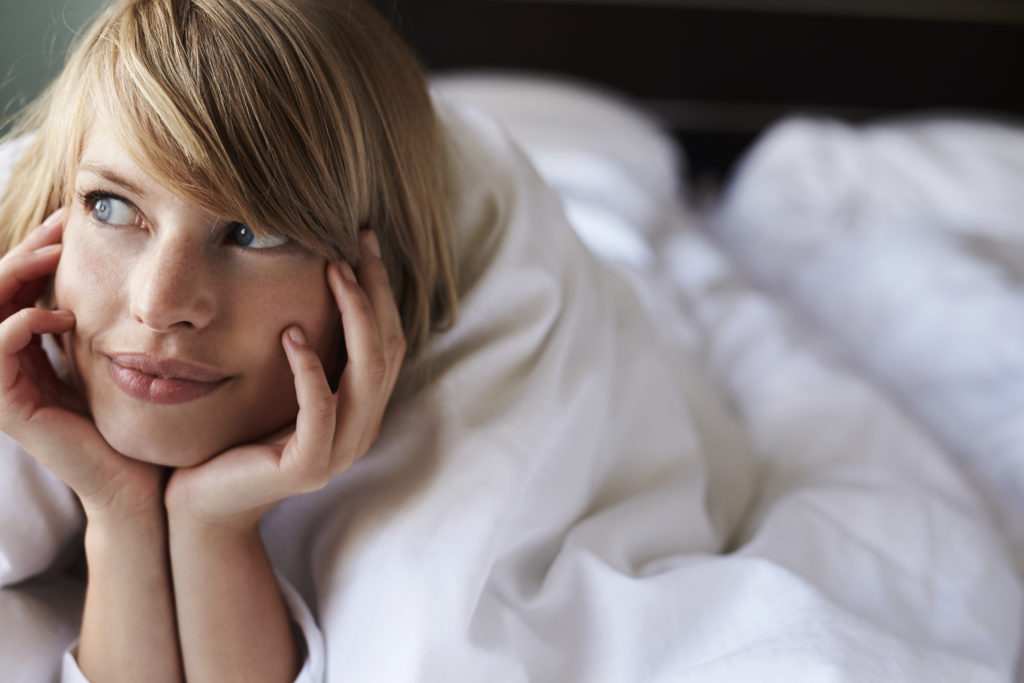 We asked respondents exactly what they would give up to ensure a lifetime of quality sleep. The winner of this question was alcohol. Over 53 percent of respondents said they’d abstain from beer, wine, and liquor forever, so long as it guaranteed sweet, sweet slumber for the rest of their lives.

Second on the list was social media. What’s the point of keeping in touch with friends, family, and that one guy from high school if your health is suffering from a lack of sleep? Almost 44 percent of Americans said there really wasn’t much of a point at all. In fact, they’d give it up if they could get quality sleep in return.

Other “essentials” participants would give up included pizza (43.9 percent), their political affiliation (almost 33 percent would switch parties), and TV (nearly 25 percent said sleep was way better than TV). On the other end of the spectrum, folks were less apt to give up sex and music for a lifetime of excellent sleep. Only a tad more than 14 percent of people said sleep was more important than sex, and under 14 percent of people said they’d silence music for silent slumber. 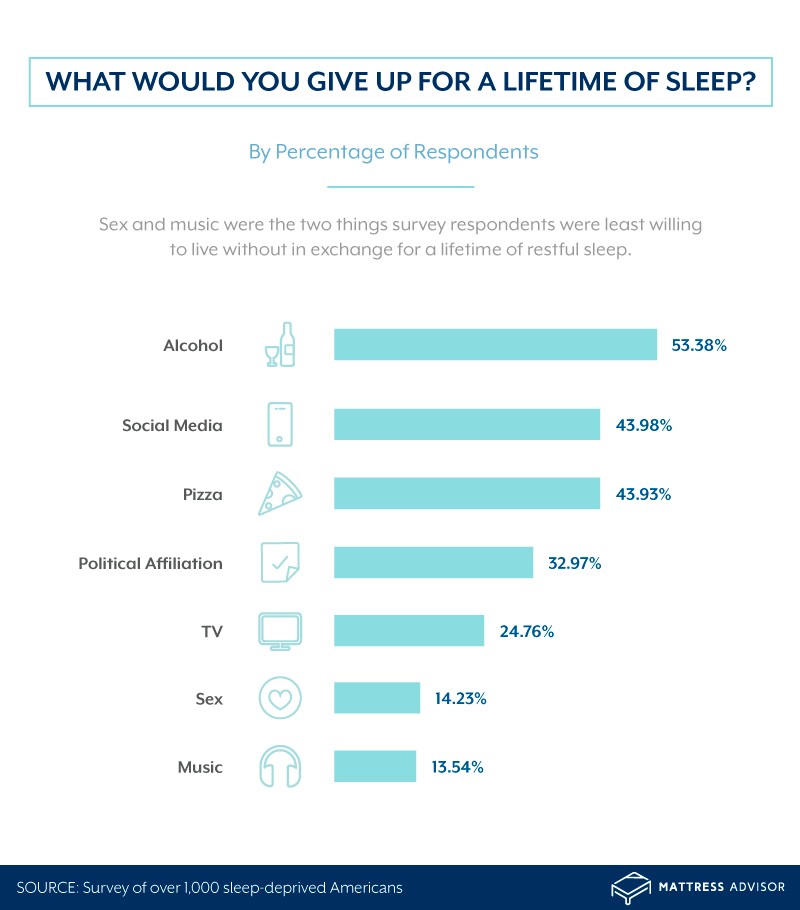 We broke down the “trading sex for good sleep” stat a little further to see exactly how much sex Americans would give up for sleep.

We upped the ante for the third category: We asked if they’d give up sex for the rest of their lives if they could have a lifetime of restful sleep. Unsurprisingly, most people weren’t too keen about that offer. One-hundred percent of engaged men rejected the offer and nearly 91 percent of women in a relationship didn’t think it was a fair trade. The most likely to give up sex forever for a lifetime of quality sleep were divorced people: 21 percent of men and over 32 percent of women said they’d make the trade if it were possible. 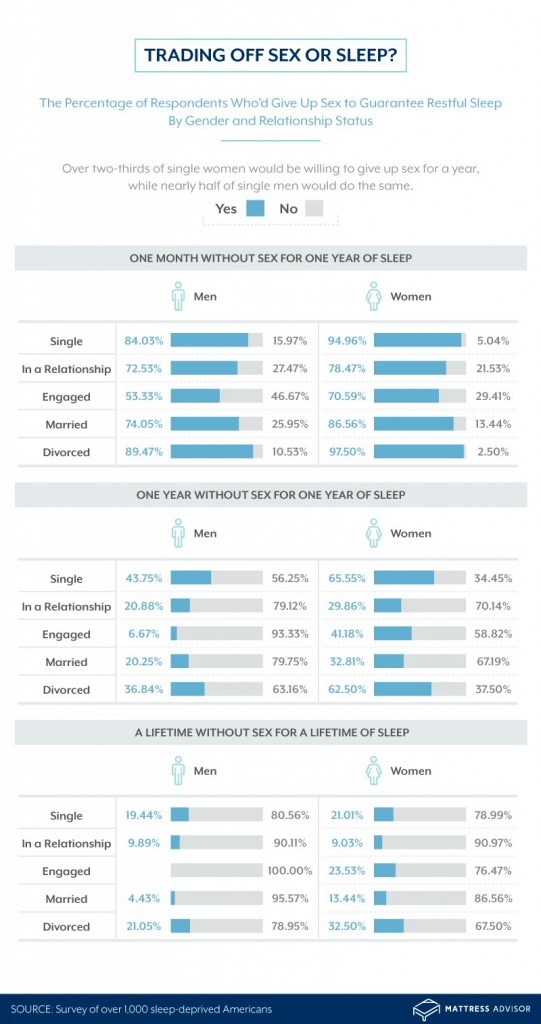 As determined above, sleep and sex are both important factors for a happy life. So we set out to see how participants would respond if we flipped the deal: We asked them how many hours of sleep they would give up for an ideal sex life.

Regionally, those located in the Northeast were the most interested in giving up a couple of hours of zzz’s per night for an ideal sex life, while Midwesterners were only willing to give up less than 1.5 hours.

Side note: make sure to check out our top picks for the best mattresses for sex. 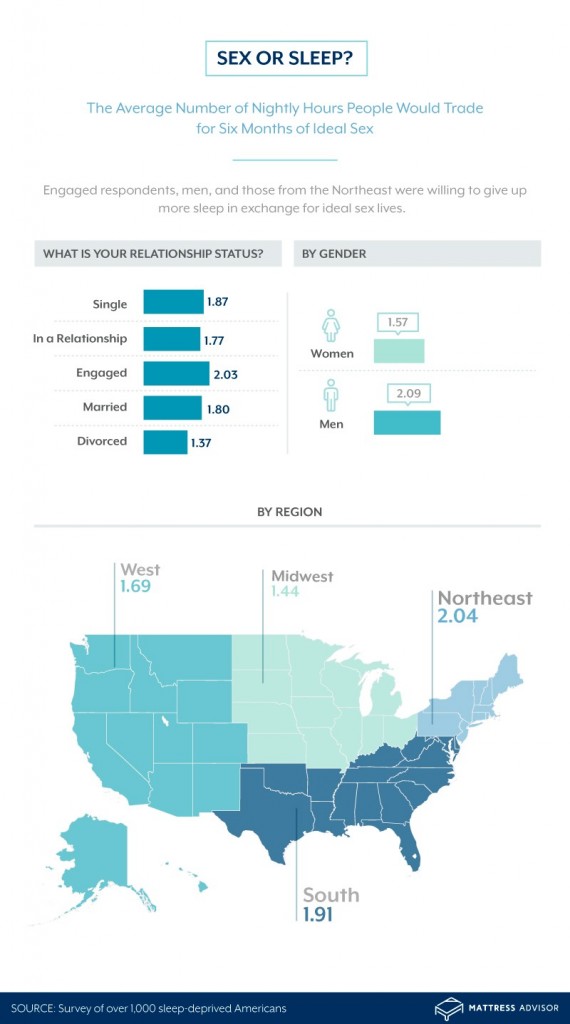 Sleeping on the Wagon

First off, alcohol isn’t exactly the best solution for getting a good night’s sleep anyway – it may make you feel drowsy, but it can also interrupt your circadian rhythm, block your REM sleep, or aggravate breathing problems. It can also wreak havoc on your bladder and lead to nighttime bathroom trips.

Regardless, people aren’t always willing to curb their behavior. But some of our respondents would be fine giving up alcohol for life if it meant a lifetime of good sleep.

Overall, women (over 61 percent) were more likely than men (53 percent) to give up drinking forever for good sleep. When we broke respondents down by generation (millennials, Gen Xers, and baby boomers), Gen Xers were the most likely to go cold turkey for a lifetime of good sleep. And by region, those from the South were the most agreeable to these terms (nearly 38 percent).

While baby boomers represent 33 percent of the U.S. population, they’re buying 45 percent of all alcohol by dollar value compared to just over 20 percent attributed to Generation X. This might tie into the fact that Gen Xers would be more likely to give up booze for sweet slumber. 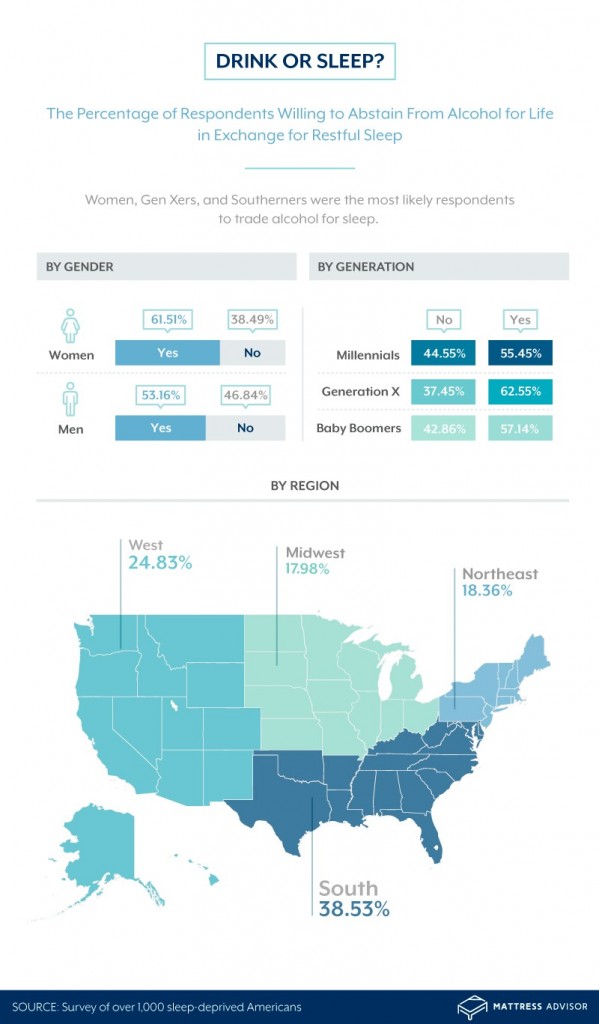 Gen Xers would be the coolest with giving up social media forever compared to their generational counterparts – nearly 49 percent agreed to ditch it, compared to almost 47 percent of baby boomers and around 42 percent of millennials.

Regionally, the South was again the most likely to choose sleep. Nearly 48 percent of Southerners would be alright with giving up social media, compared to just over 38 percent in the Midwest. 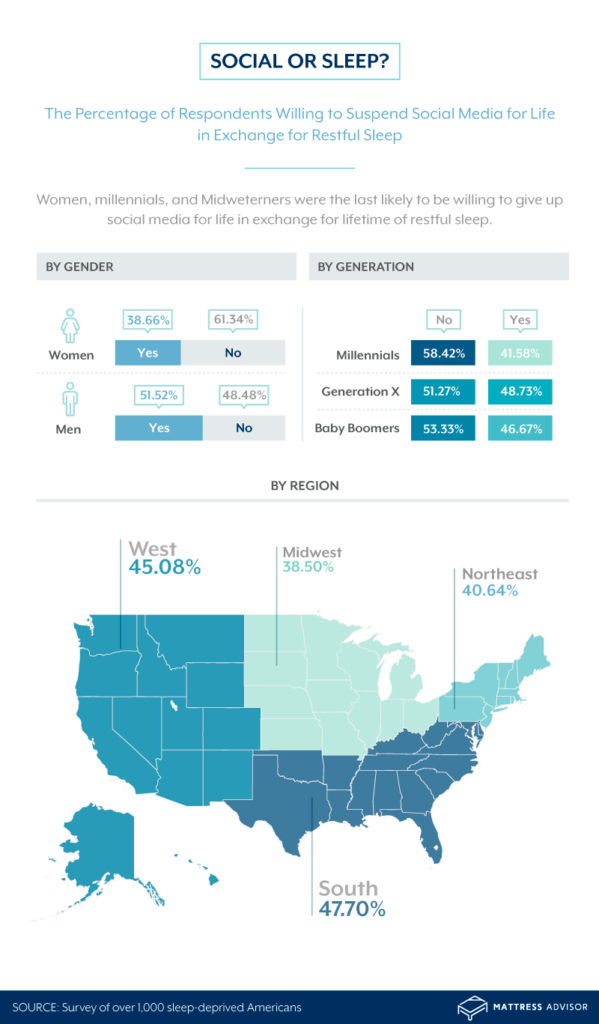 If you’ve ever fantasized about your future and what it looks like, there’s a good chance it might include things like landing that dream job, being financially secure, or sporting a fit physique. We decided to use some of these goals to determine how much sleep people would be willing to give up to achieve their dreams.

People were willing to give up the most sleep to live in their dream home – as much as nearly 2.5 hours a night. The second most popular sleep sacrifice was for a dream job. Respondents would agree to give up 2.46 hours of sleep each night for six months to reach this goal.

They’d also be willing to sacrifice nearly two hours of sleep each night for the ideal physique (of course, if they used that time to go to the gym, they may get the same result). The ideal sex life was another goal for many, but people were a little less willing to give up sleep to attain it (they’d trade 1.8 hours a night). And finally, getting a 10 percent raise was at the bottom of the list, at roughly 1.6 hours of sleep a night. 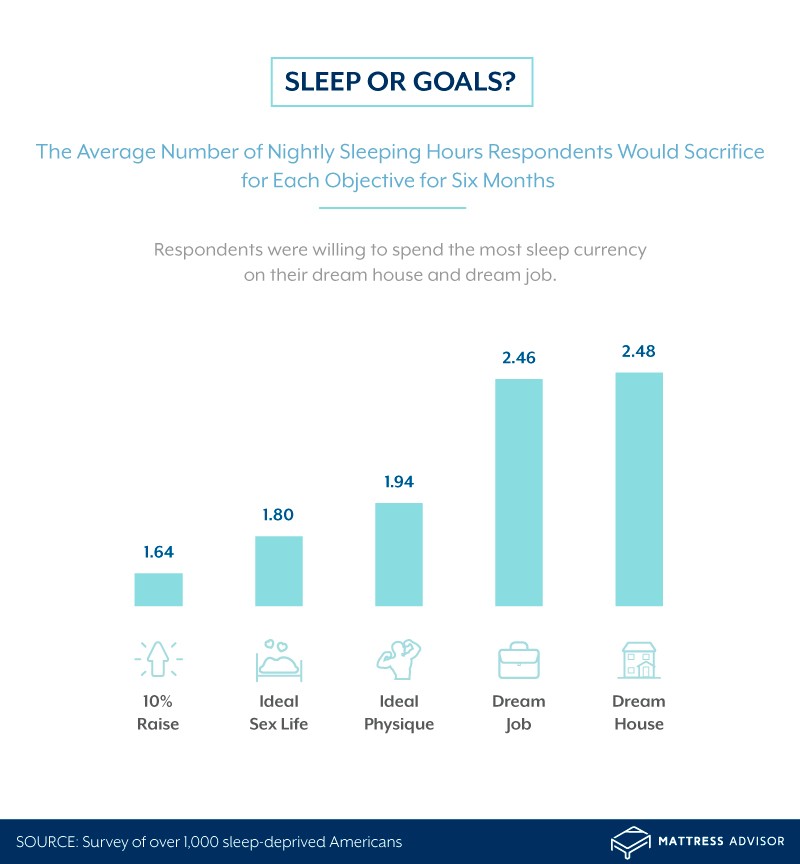 The Sleep Struggle is Real

At the end of the day, sleep is crucial, and our respondents let us know just how important a night of quality slumber really is. Whether we’re looking at what people would give up for a good night’s sleep, or how many hours of sleep people would trade to make other desires a reality, it’s clear there are great lengths people would go to catch that elusive night of great sleep.

Getting a fabulous night of healthy sleep isn’t a fantasy that is always out of reach, however. At Mattress Advisor, we make it our mission to help customers find their sleep – whether it’s the perfect mattress, bedding accessories, or sleep tips tailored to your needs. When it comes to finding the right mattress and developing healthy sleep habits, good advice can really pay off – after all, you spend a significant amount of your life doing it.

We collected 1,009 responses from Americans who self-identified as having trouble sleeping from Amazon’s Mechanical Turk. 58% of our participants identified as male, and 42% identified as female. Participants ranged in age from 18 to 80 with a mean of 36. Hypotheses were then statistically tested.

The data we are presenting relies on self-reporting. There are many issues with self-reported data. These issues include, but are not limited to: selective memory, telescoping, attribution, and exaggeration.

If you want to share this content with your audience (or just someone who would totally give up Twitter for a good night’s sleep), you’re welcome to do so. Simply provide a link back to this page to credit us appropriately.

We surveyed over 1,000 employees to understand how they define “success” and the role sleep and energy play in achieving it.

Would You Give Up Sleep for More Sex?

How much sleep do people give up for sex? We surveyed over 1,000 people to find out. 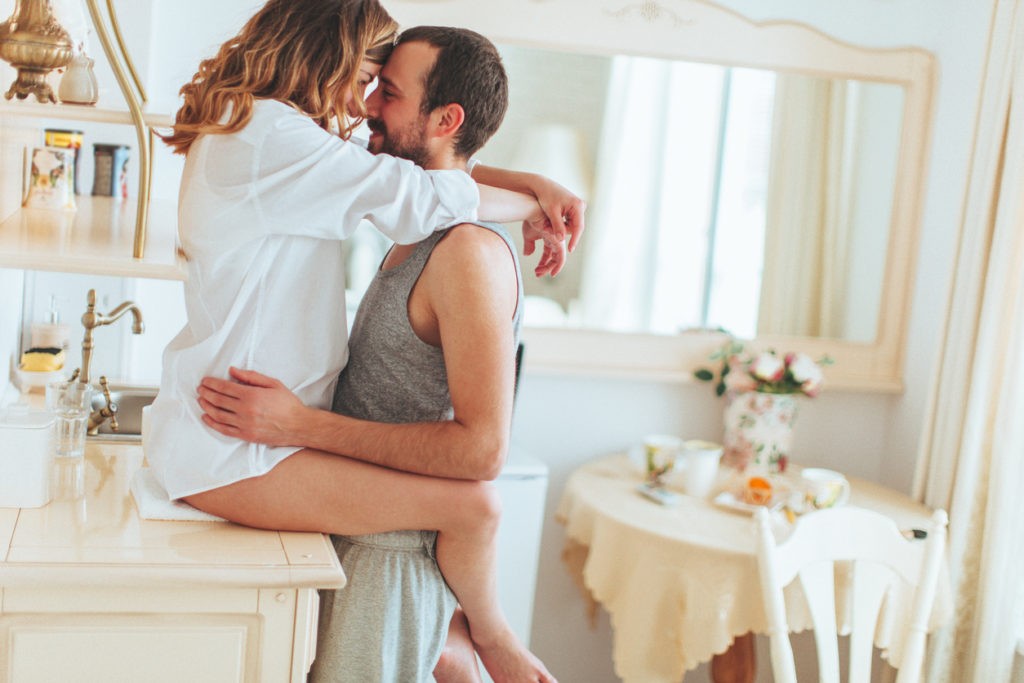 We surveyed nearly 1,000 people in a relationship and asked them if morning routines (including having sex) made them feel more productive.