Late Night Bites: What Americans Are Eating at Night and How It's Impacting Their Sleep

A study on the after-hours eating habits of 1,001 fast-food fans 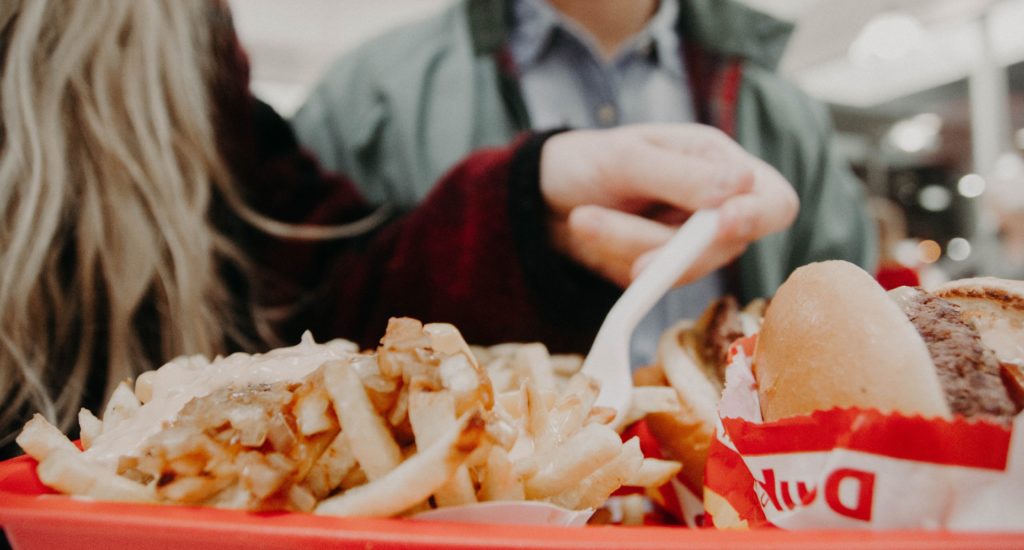 We surveyed over 1,000 people on their after-hours snacking tendencies. We asked them about their favorite late night food stops, how far they’d be willing to drive to get the meal they wanted, and whether or not these decedent indulgences were worth the effort in the end.

Let’s say you’re headed home from a long night out. Maybe you saw a late movie or met some friends for drinks. Either way, you’re driving home and realize you’re completely starving. What do you do?

You probably don’t have to drive very far in either direction to find the bright lights of a fast-food joint or 24/7 diner. In some cases, midnight snacking has become a meal unto itself.

But when the cravings hit, just how far are you willing to go to get exactly what you want? To find out, we surveyed over 1,000 people on their after-hours snacking tendencies. We asked them about their favorite late night food stops, how far they’d be willing to drive to get the meal they wanted, and whether or not these decedent indulgences were worth the effort in the end.

Read on as we explore which fast-food chains motivate people to go out of their way and how much they regret their nighttime noshing.

Meals on Our Mind

When asked to rank their favorite fast-food stops, one restaurant location reigned supreme: Taco Bell. With their casual brand of Tex-Mex cuisine, Taco Bell certainly knows their late night menu audience. Having trademarked the “Fourthmeal” experience, Taco Bell would certainly have you believe there’s more to life than breakfast, lunch, and dinner – and it can usually be found in the form of nachos and supreme wraps. 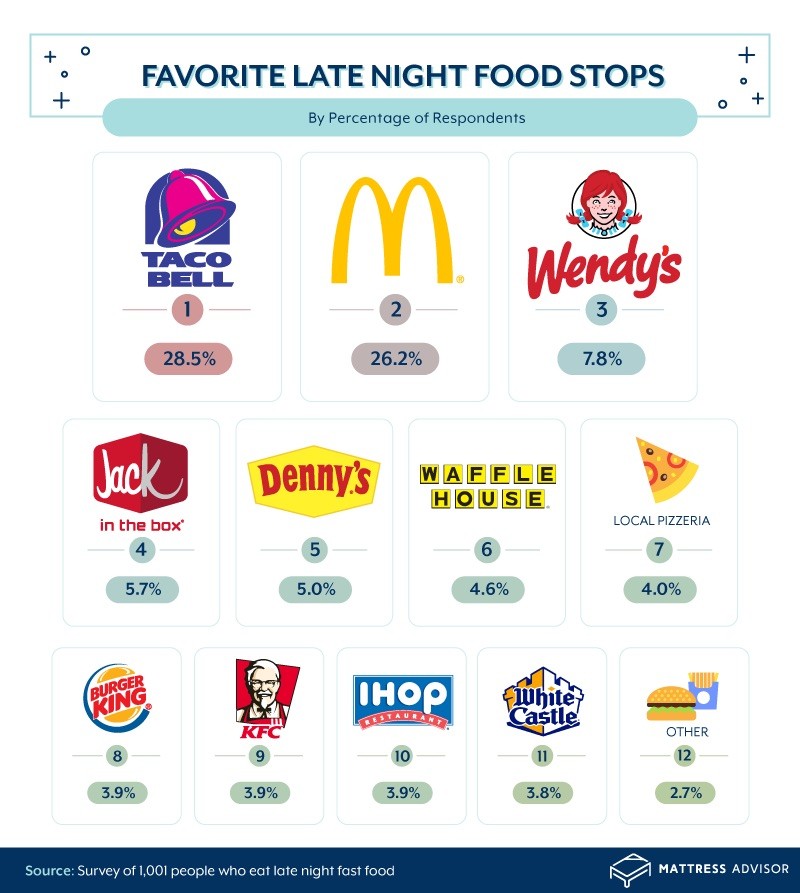 If tacos and burritos aren’t quite your thing when the midnight munchies hit, there’s another food category that earned three of the top four slots for favorite fast-food meal: burgers and fries. Starting with McDonald’s and followed by Wendy’s and Jack in the Box, these traditional burger joints ranked among the most popular dining options after hours.

It’s been said that breakfast is the most important meal of the day, but that doesn’t mean you’re only allowed to think about pancakes and waffles in the morning hours. Typical 24/7 diners like Denny’s, Waffle House, and IHOP ranked among the most popular eating options for people looking for a late night snack to satisfy their hunger.

With a new McDonald’s location opening every 14.5 hours, finding one to satisfy your fries and milkshake cravings typically isn’t very difficult. But not every fast-food chain has the same level of accessibility, and in some cases, you might have to be willing to drive to get the food you’re desiring. 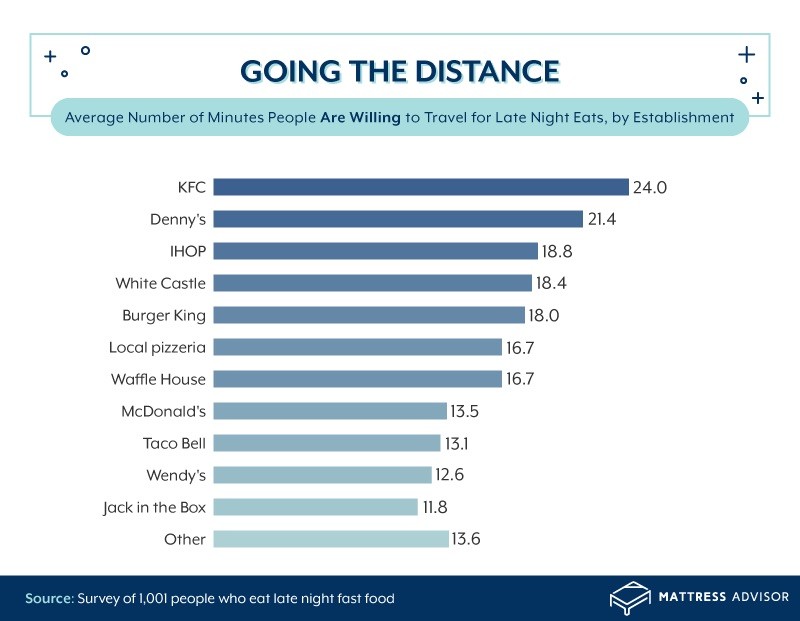 At most, people were willing to drive 24 minutes on average to get the savory deliciousness of KFC – longer than any other meal from any other restaurant. That isn’t just a matter of preference either. There might actually be a scientific reason why people are willing to go so far to get KFC’s signature fried chicken, even if a similar option was available close by. Some combination of pure fat, protein, and sodium suggests KFC might have found the perfect balance – and people are willing to travel for it.

Like KFC, it wasn’t burgers and fries that compelled people to drive long distances for food, it was the allure of breakfast instead. People were willing to drive further for both Denny’s (21 minutes) and IHOP (19 minutes) if it meant they could get the food they wanted after typical mealtime hours. And while places like Taco Bell and McDonald’s may have been more popular solutions overall, people didn’t spend more than 14 minutes in the car trying to find one.

The occasional late night adventure for something special like fried chicken or pancakes can be exciting, but the reason you’re awake in the first place might help dictate what you’re actually in the mood to eat. 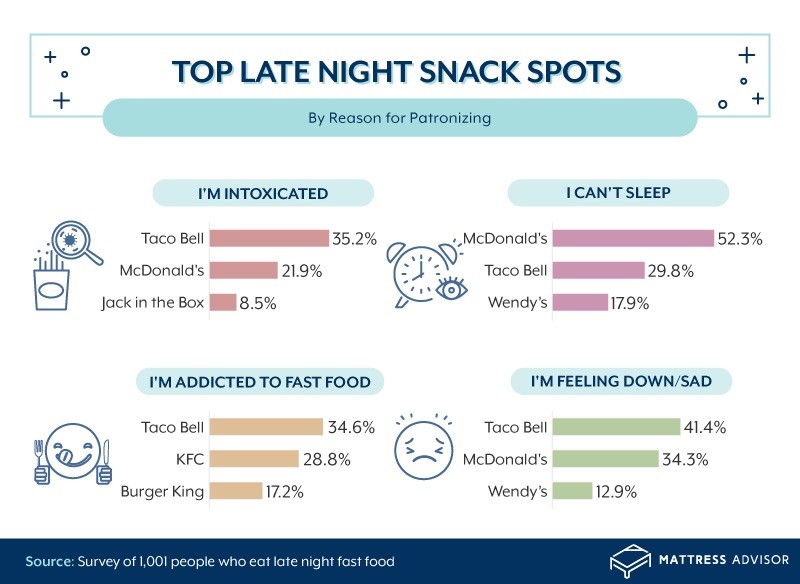 Taco Bell wasn’t just the most popular eatery overall, it was also the go-to choice for people who were intoxicated. There’s a reason why you might be craving junk food when you’re hungover (or suspect you might be in the morning), and it’s mostly about fat.

Because greasier food options tend to have a higher calorie count than other meals, the body craves them to try and help replenish what’s been lost after one too many drinks. Another 1 in 5 preferred McDonald’s instead, which can thankfully be delivered right to your doorstep in some cities, so you don’t have to risk driving under the influence to try and get something tasty to eat.

Taco Bell was also the most popular fast-food choice for people looking to eat as a part of their junk food addiction habits (along with KFC and Burger King), or because they were feeling down. When you’re sad, experts typically recommend leafy greens, nuts, and seeds to help balance out your mood. These aren’t necessarily what comes to mind when you think of Taco Bell, but it seems to do the trick.

When you can’t get to sleep, there are a number of things you probably should be eating to help you start to unwind. Of course, what’s good for you and what you’re in the mood for don’t always line up. More than half of people who find themselves snacking when they can’t fall asleep preferred to munch on McDonald’s over anything else.

As they say, all good things are best in moderation, especially when it comes to fast food. You may have a craving every now and then, and may even be willing to drive the distance to get the meal you want, but that probably shouldn’t be a regular occurrence.

Because of the nutritional value of most fast food, and the high caloric intake associated with too many burgers and fries, making fast food a part of your regular diet can lead to headaches, depression, and a higher risk for conditions like heart disease or stroke. Still, that doesn’t stop some people from putting their favorite late night snacking stops on repeat. 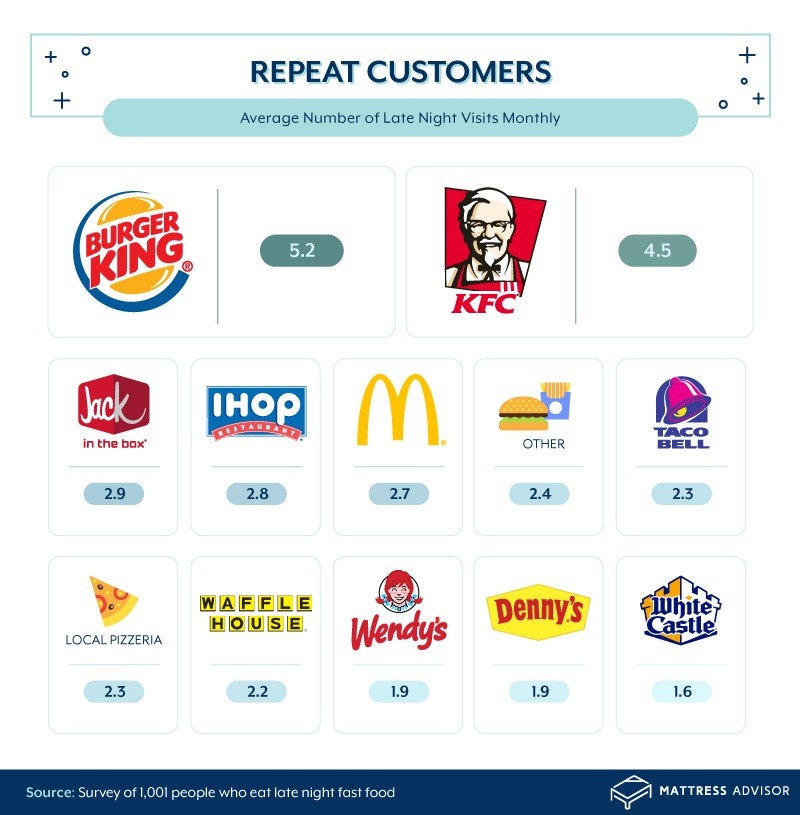 Burger King and KFC led the pack with the most monthly visits at 5.2 and 4.5 trips, respectively. Patrons of Jack in the Box, IHOP, and McDonald’s also reported more than two and a half late night visits per month.

38.3% of people reported a lower sleep quality if they ate fast food before bed.

When you start to feel that rumble in the pit of your stomach or you know you’re going to be in bad shape in the morning if you forgo food before going to bed, there’s almost nothing you can do besides finding a quick bite to eat. But that late night snacking can have consequences, whether or not fast food is on the menu. 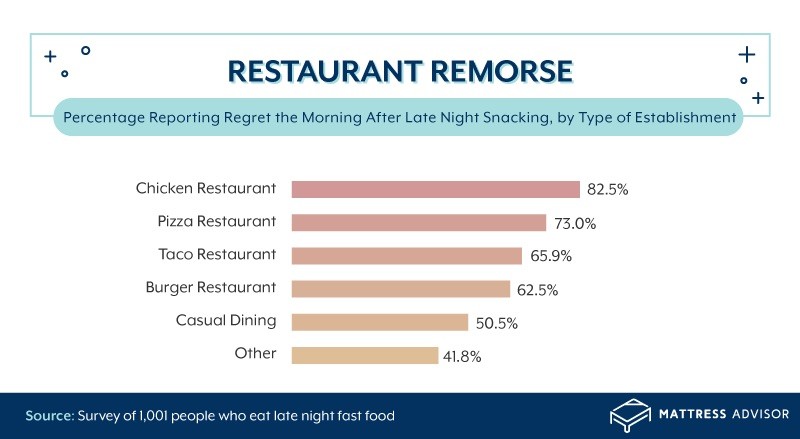 Studies have shown eating too much late at night can cause an unhealthy fluctuation in weight, hormone imbalances, loss of energy, and poor memory retention. According to our survey, more than 1 in 3 (over 38 percent) of our respondents reported a low quality of sleep after eating fast food before bed and a vast majority regretted their indulgences entirely.

Though people frequented Burger King multiple times a month more often than any other fast-food eatery, it was restaurants in the chicken category that claimed the highest incidence of regret afterward. More than 82 percent of respondents said they wished they’d refrained from treating themselves to chicken sandwiches or drumsticks by the time they woke up in the morning. Similarly, roughly 3 in 4 people felt the same way about pizza restaurants, while regret from patronizing taco and burger restaurants came in at 65.9 and 62.5 percent, respectively.

Ideally, fast food is meant to be two things: quick and cheap. In some cases, it can also be exceptionally delicious, no matter what time of day you’re eating it. 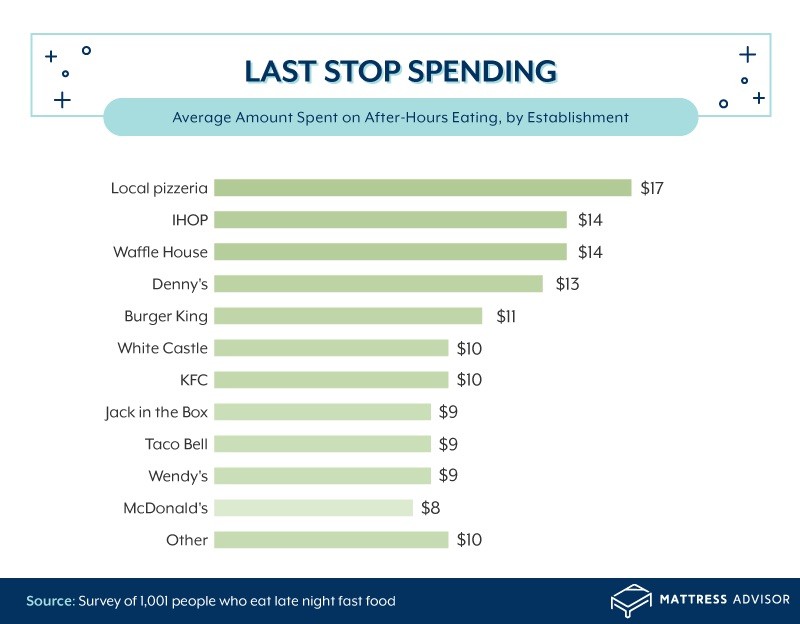 Of course, low cost isn’t always guaranteed, especially if you’re eating out multiple times a month or ordering more than you really need. Millennials are documented as spending over $2,900 a year on eating out, and a significant portion of that could be going to the drive-thru.

On average, stopping for a bite at your local pizzeria will cost $17 after hours. Only slightly less expensive, breakfast food also ranked among the more expensive midnight meals, ranging from $13 to $14, on average. Other fast-food establishments like McDonald’s and Taco Bell ranged from $8 to $11, and while that might not seem especially high, consider that spending $11 at Burger King six times monthly totals $66 – or $792 over the course of the year.

You Sleep What You Eat

At the end of the day, what you decide to munch on in the wee hours of the morning or very late at night doesn’t just affect your wallet or how you’ll feel the next day – it can have a profound effect on the quality of sleep you’ll get.

What you eat and when you eat it can create positive sleep patterns that help you feel creative or energized – as long as you’re putting the right food into your body at the right time of day. As people we polled admitted, whether it’s in response to having too much to drink or not being able to fall asleep at night, they were willing to drive for miles to get their hands on the perfect portion of KFC or McDonald’s, and typically more often than once in a while.

But watching what you eat isn’t the only way to make sure you’ve got your sleep patterns on the right track. At Mattress Advisor, we take the time you spend between the sheets seriously, and we know a good night’s sleep means an even better tomorrow. From our six-point testing procedure and eight-point evaluation, every mattress we review gets put through its paces, so you know exactly what to expect before your face ever hits the pillows.

We collected responses from 1,001 people using Amazon’s Mechanical Turk. 51.1% of participants were female, and 48.9% were male. Participants ranged in age from 18 to 84 with a mean of 32 and a standard deviation of 11.40. Participants were excluded if they said they never eat fast food after midnight or were clearly not paying attention (e.g., failed attention check questions or entered obviously inconsistent data). We weighted the data to 2017 BLS data for age and gender of Americans. No statistical testing was performed.

The data presented above relies on self-reporting. There are several issues with self-reported data. These issues include but are not limited to: selective memory, telescoping, attribution, and exaggeration.

Second-guessing your dinner decisions for the night? We don’t blame you. Feel free to share the results of this survey with your readers, just be sure to include a link back to this page so our contributors get credit for their work too. (They probably wouldn’t say no if you decided to share some of your fries, too.) 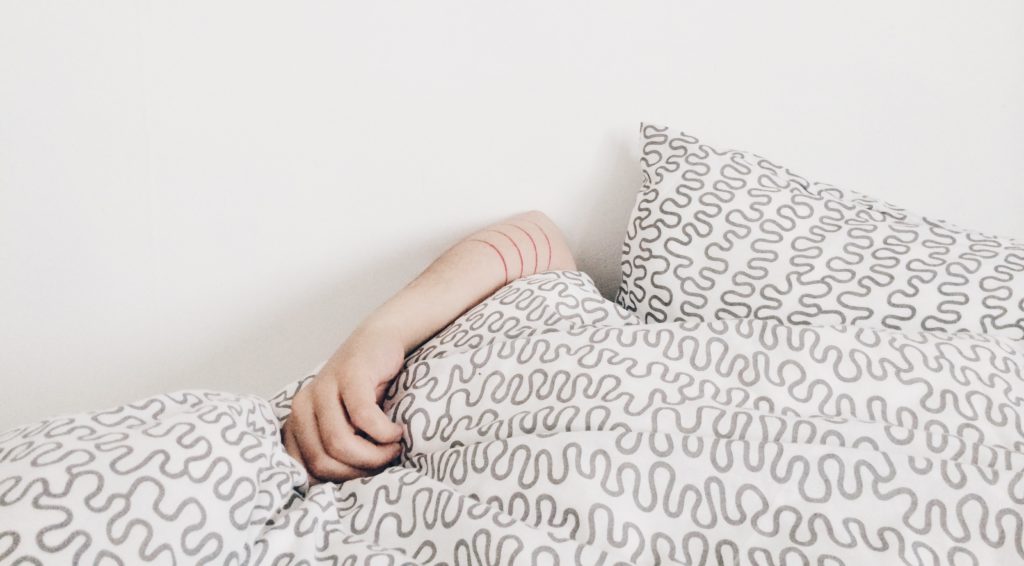 Learn how simply getting a good night’s sleep could be the best way to help you control your weight and keep it under control. 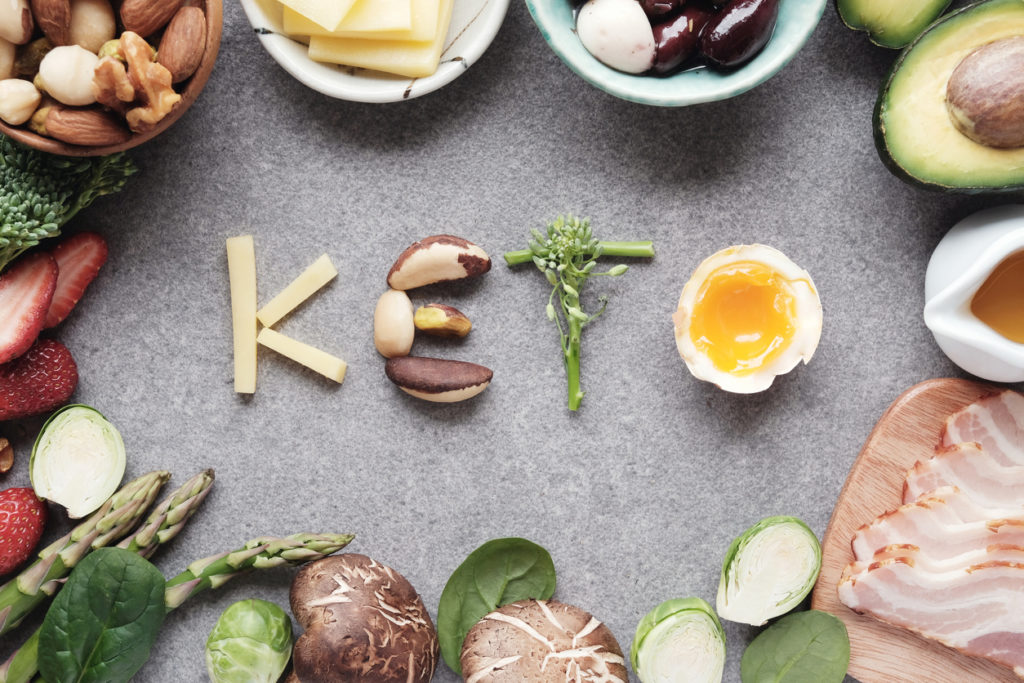 Sleeping on the Keto Diet

The keto diet can bring many changes to your body. Follow these 4 tips to ensure your sleep quality isn’t sacrificed.