Exploring the Age-Old Advice Through More Than 1,000 Responses

How many times have you heard the age-old advice, "Never go to bed angry"? We surveyed 1,013 people in a serious relationship to determine how they handled disagreements that remained unresolved at bedtime.

How often have you heard someone advise their friends, family, or even strangers to resolve their differences before the day ends and “never go to bed angry”? Chances are, more times than you can recall.

When it comes to avoiding bedtime disagreements or resolving conflict before going to sleep, do you believe in or adhere to the advice, and has it impacted your relationship for better or worse?

We surveyed 1,013 people who were either engaged, married or in another serious relationship to determine how they handled disagreements that remained unresolved at bedtime. As expected, the responses ran the gamut. However, most couples averaged staying up an extra hour and 20 minutes to settle their differences.

Does putting in the extra effort pay off or merely compound a couple’s frustrations at bedtime? Before you and your partner climb into bed tonight, read through our results. Maybe they can make a difference in what happens after the lights go out.

Few people will admit they enjoy going to bed angry with their partner, especially when they are sleeping within a foot or two for the next six to eight hours. 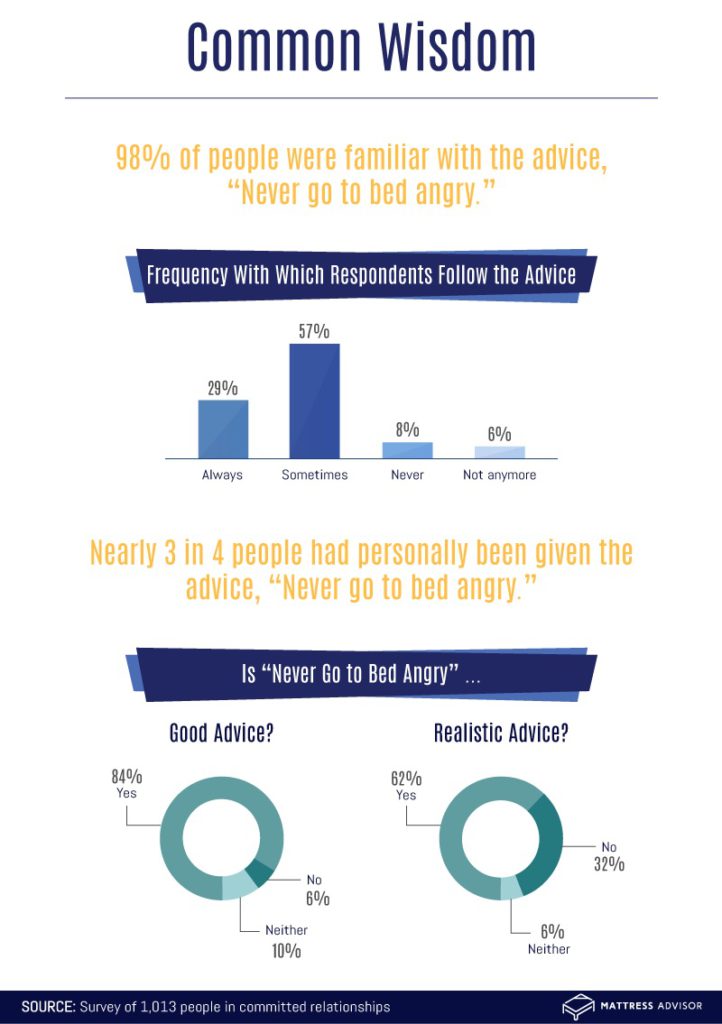 To answer a previous question, practically everyone has heard the advice, “never go to bed angry.” In fact, 98 percent of our respondents admitted such. What we wanted to know was what percentage followed such wisdom.

For the 86 percent who followed the practice of never going to sleep with their partner when unresolved differences hung over their heads, 57 percent “sometimes” adhered to the advice, with 29 percent “always” doing so.

The thinking behind this advice is that people tend to experience more negative emotions when they are tired or even hungry. For example, if someone slept poorly the previous night and had a rough day at work or at home with the kids, they might be more tempted to highlight those frustrations near bedtime.

One piece of advice offered by experts is that instead of raising a potentially volatile issue before bedtime, relax for 20 minutes or so to see if that settles your mood, in hopes of easing late-night tension between you and a partner.

However, before you give yourself an excuse to argue before bedtime, other research found that holding on to bad vibes while sleeping impacts your brain to the point that getting rid of them later is more difficult.

Our survey found there’s also a difference between good advice and realistic advice – 84 percent of respondents indicated never going to bed angry was “good” advice, but only 62 percent said it was “realistic.”

How satisfied or happy you are in your current relationship has a strong correlation to whether you adhere to the “never go to bed angry” concept. 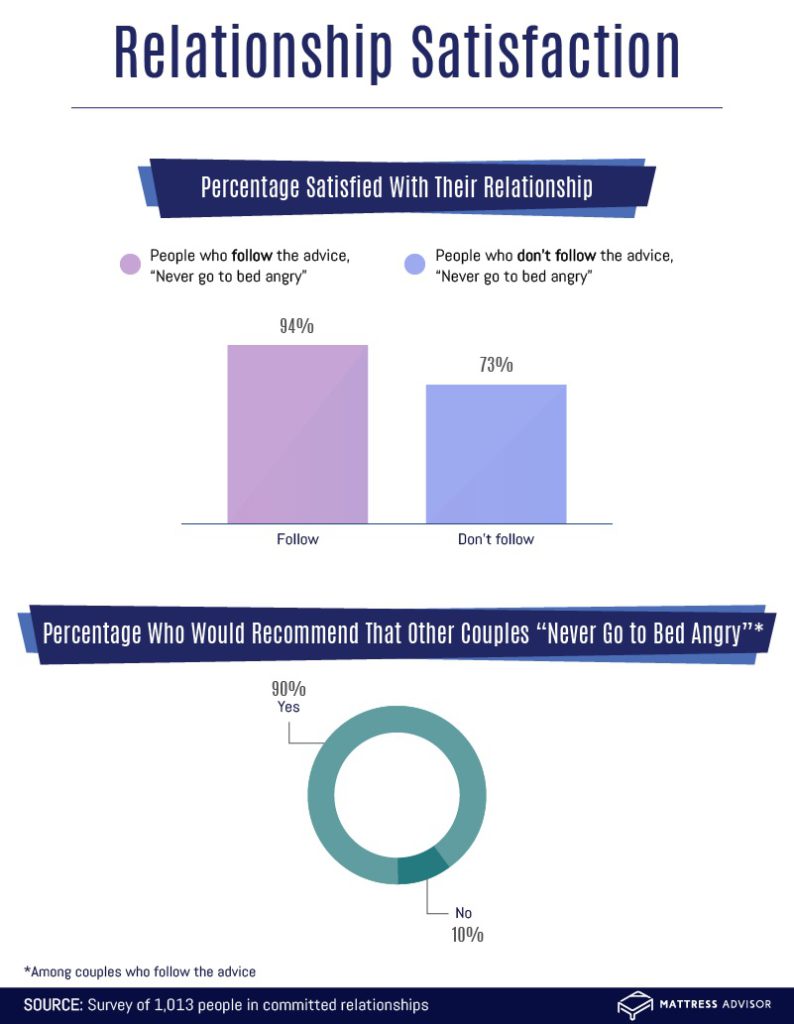 Among those who followed the advice, an astounding 90 percent recommended to other couples that they also shouldn’t go to bed angry.

Another study that supports such advice suggests that maintaining proper cognitive function during the day by getting quality sleep is essential. Experts say when people argue, their adrenaline and cortisol levels increase. When this occurs later in the day, it can negatively impact sleep habits.

Not Every Issue Is Worth Arguing About

Speaking of relationship advice, has someone ever suggested that you “pick your battles” and not attempt to argue about every single issue? Ninety-one percent of those surveyed agreed that choosing which matters are worth arguing about was vital in a relationship. 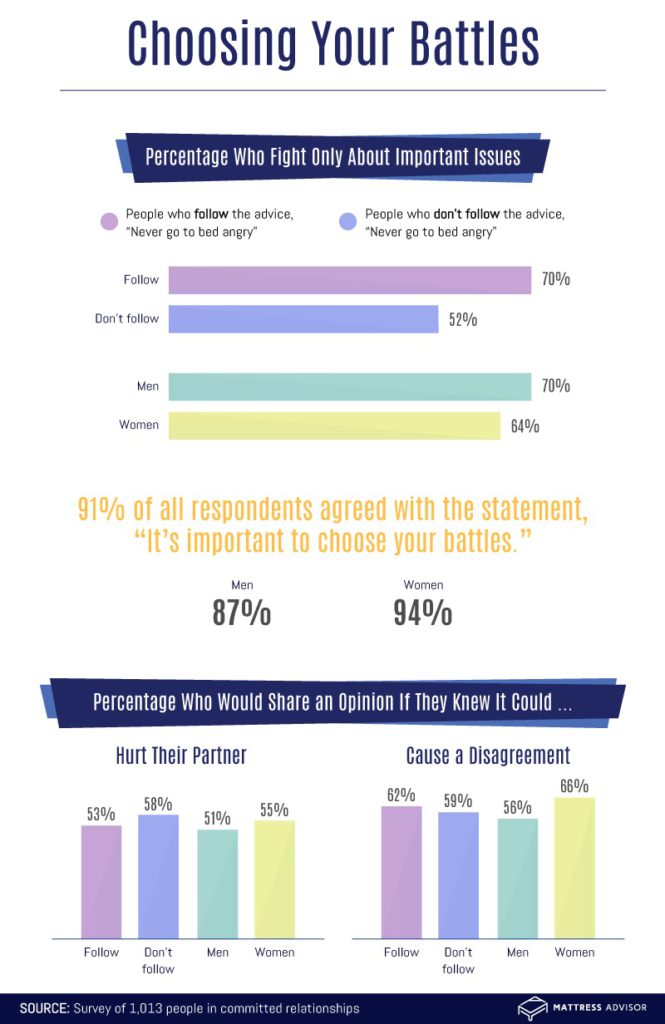 Disagreements, even some that escalate into heated arguments, are inevitable for most couples who are in long-term relationships. Common issues couples argue about are finances, sex, where to spend holidays, and housework.

Is it beneficial to bring up an issue before bedtime that might cause a disagreement or hurt a partner’s feelings? Probably not.

For those who said they didn’t follow the advice of not arguing before bedtime, 58 percent say they would share a concern knowing it might hurt their partner, and 59 percent would share if they knew it could cause a disagreement.

Keeping the Light on to Resolve Late-Night Issues

When the inevitable happens, and a conflict arises between couples before bedtime, how do most people handle the situation? Do they stay up and iron it out, or just move to their respective sides of the bed and wait for the morning? 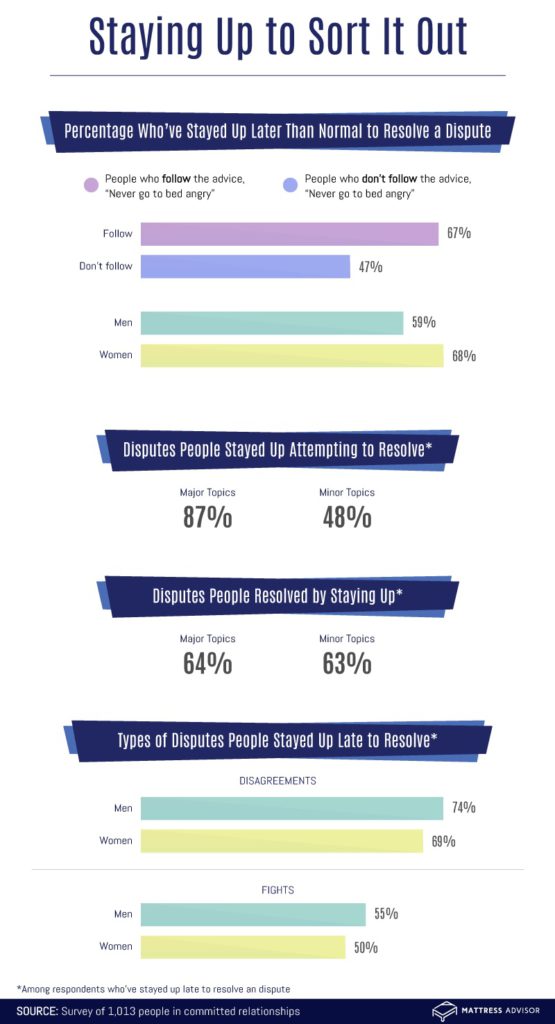 Confronting subjects before bedtime is, indeed, noble, but not all attempts are successful.

A significant percentage of respondents – 87 percent – revealed they stayed up late in an attempt to resolve major issues, with 48 percent doing the same to reach common ground on minor issues.

The good news is that almost two-thirds of respondents who stayed up later found common ground or resolved both “major” and “minor” issues.

Kissing, Cuddling and Touching Before Bedtime

Most people have routines or habits they follow throughout the day, but what about bedtime? When it comes to bedroom interactions between couples, our data show a distinct difference between those who kissed, cuddled, or fell asleep touching one another. 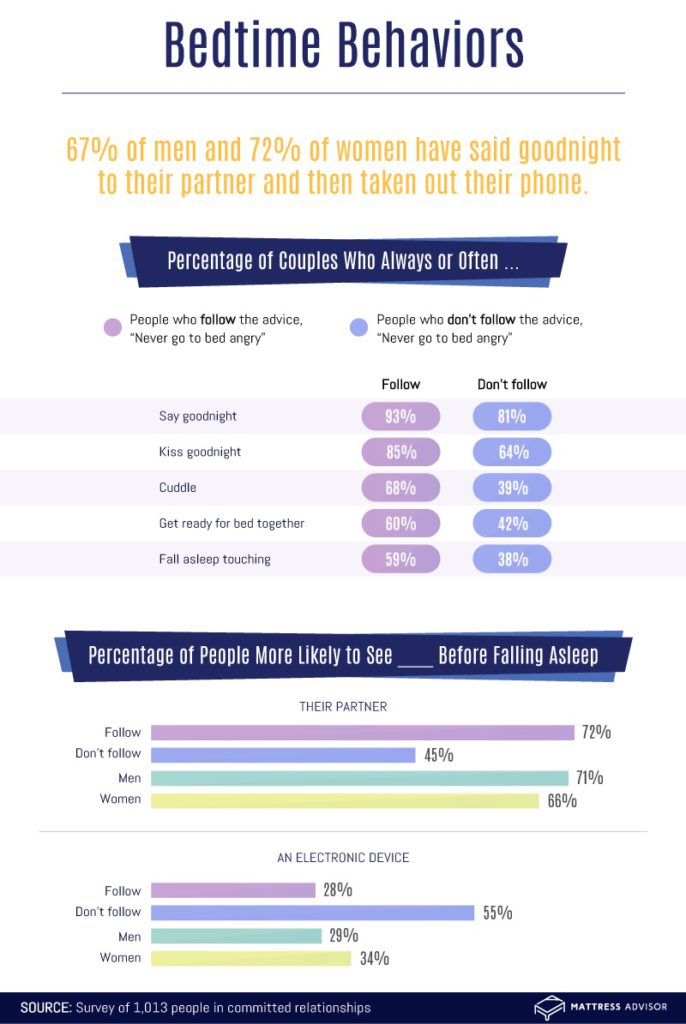 Going to bed without a dense cloud of resentment or hurt feelings hanging overhead may have more advantages than getting a good night’s sleep. That’s because couples who never went to bed angry engaged in more affectionate bedtime behaviors. Overwhelmingly, our results showed that satisfied couples engaged in these romantic habits.

Saying goodnight to your partner is a common courtesy. After all, if you were leaving a friend or co-worker late in the evening, you may respond in the same way, so it’s important to bring that friendliness into our personal life. For couples who said they followed the rule of not going to bed angry, 93 percent said they always or often said goodnight to their partners.

Of that same group, 85 percent said they kissed goodnight, 68 percent cuddled, and 60 percent got ready for bed together or fell asleep touching.

The percentages fell significantly for those who said they didn’t follow the advice. Only 81 percent said goodnight to their partners, and slightly more than a third fell asleep touching or intertwined with one another in some way.

Speaking of being intertwined, many people tend to keep their favorite electronic device close at hand before bed. For those respondents who said they didn’t follow the recommended bedtime practice, over half reported the last thing they saw before falling asleep was their device. For those who said they followed the rule, just over a quarter saw their electronic device before sleeping, while the other 72 percent said they saw their partner before drifting off.

Most health care experts agree that reading or watching something on a device near bedtime interferes with sound sleep.

What You Believe About You and Your Partner

There are many components to a successful relationship; more so than what we touched on in this survey. However, breaking down some common traits between those who didn’t go to bed angry versus those who did was interesting. 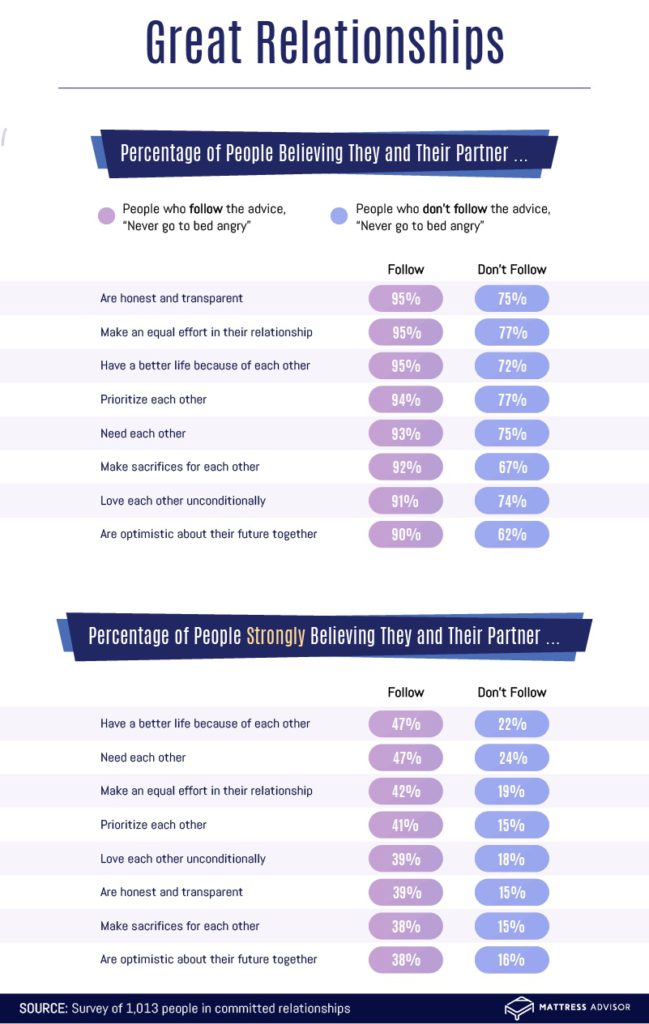 Respondents who said they followed the rule were more than twice as likely to strongly believe they had a better life because of their partner than those who said they didn’t follow the rule.

Those who said they followed the “never go to bed angry” rule were far more likely to prioritize each other, essentially placing their partner’s best interests above their own.

Being honest and transparent, making an equal effort in the relationship, and having a better life because of each other, resonated with 95 percent of those who followed the rule.

Any relationship might be better if there were no disagreements, but life happens, and differences of opinion are inevitable.

Most of us can agree that getting a good night’s sleep is essential to our health and relationships. That’s why the team at Mattress Advisor is ready to help you find the best mattress for your sleeping style.

Although we’re not relationship experts, we can offer advice on which mattresses may be the best for couples.

For this study, we surveyed 1,013 people using Amazon’s MTurk platform. Only respondents who indicated they were engaged, married, or in a serious relationship were surveyed. To ensure that all respondents took our survey seriously, they were required to pass an attention-check question.

Where necessary, some questions and responses have been rephrased or condensed for clarity and/or brevity. Not all percentages add up to 100 due to rounding. These data are intended to be used for entertainment only. These data rely on self-reporting, and no statistical testing has been performed on the findings. Potential issues with self-reported data include but are not limited to the following: exaggeration, attribution, telescoping, and selective memory.

Rest assured that we won’t get angry if you share this article. Our one request is that you link back to this survey so that those deciding on whether to bring up touchy subjects before bedtime can be better informed.