Which NFL Teams Do People Lose the Most Sleep Over?

We surveyed nearly 1,500 football fanatics to see which team has the most sleep-deprived supporters.

There’s no denying that fans of teams in the National Football League are dedicated. From braving subzero temperatures to traveling hundreds of miles to catch a game, money isn’t the only thing football fans give up to root for their team. In some cases, teams don’t even have to win a game to elicit these die-hard levels of loyalty (we’re looking at you, Cleveland Browns fans).

But fans are giving up something else on a weekly or monthly basis, whether for a traditional Sunday night game or for the thrill that follows a postseason victory: sleep.

We polled nearly 1,500 NFL fans about just how late they’re willing to stay up for their team, if their dedication shifts during the playoffs, and which rivalries are keeping fans up at night. Want to see which teams really have the most sleep-deprived supporters? Read on to find out.

The NFL regular season runs for 17 weeks, typically from September to early January. Over the course of each team’s 16-game schedule (including a single bye week), some fans are eager to stay up past their bedtime to watch their teams win, lose, or occasionally tie. 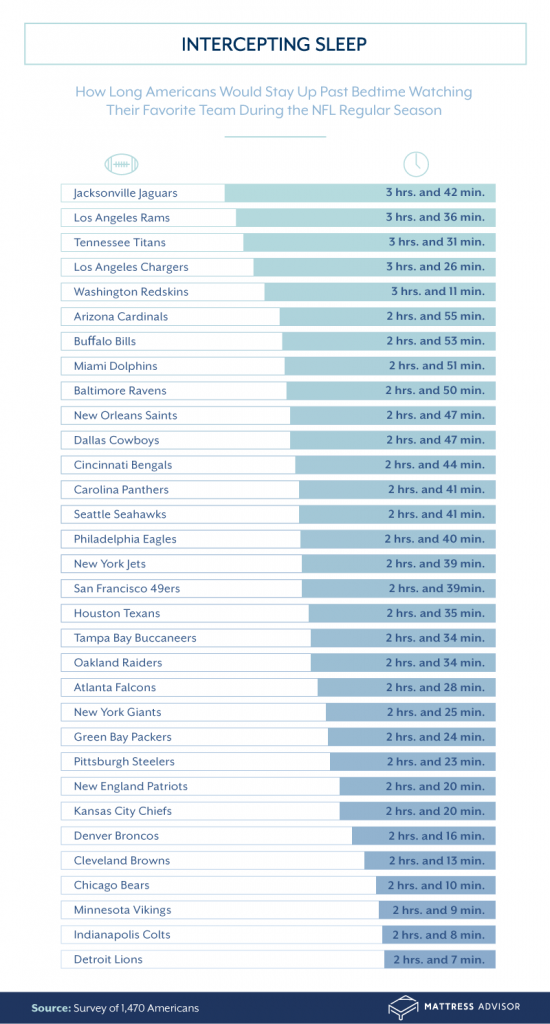 Among all 32 teams, Jacksonville Jaguars fans were willing to stay up the longest to cheer on their team in the regular season: an additional 3 hours and 42 minutes on average. Having embraced their underdog status all year, the Jaguars managed to pull out one of the most impressive victories of the 2017 season (even though they couldn’t clinch the win to lead them to the big game). On the road and in the cold, they beat the then-favorite Pittsburgh Steelers by a score of 30-9. Analysts may not have expected much from the Jaguars going into the year, but fans saw their team’s potential early in the season and were willing to stay up well past their bedtimes to watch them win.

Staying up to Watch The Game?

If you’re staying up late to watch your team in the regular season, you may have the same hopes as the coaches and players: seeing your guys in the playoffs. With only 12 teams earning the privilege – and only one who will hoist the Lombardi Trophy in the end – the postseason can mean serious business for some of the league’s most dedicated fans. Here’s a look at how long Americans pushed their bedtime back to watch their team in the postseason. 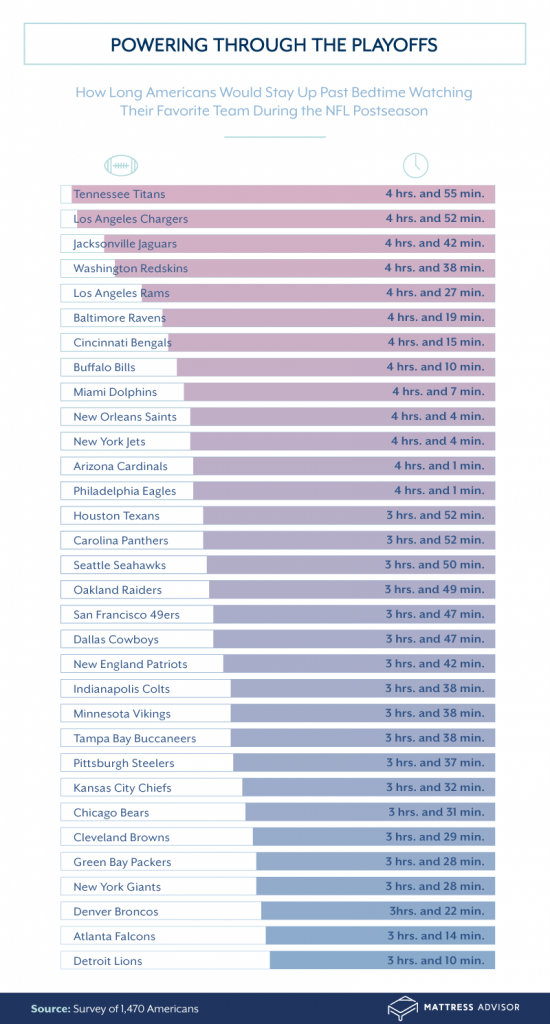 Before earning a wild-card slot in the 2017 season, it had been nearly a decade since the Tennessee Titans last played a postseason game. Their 22-21 win against the Kansas City Chiefs marked 14 years since anyone had seen the Titans win a playoff match. However, losing against one of the league’s perennial favorites, the New England Patriots, ended their bid to be the ultimate victors sooner than fans might have liked. In spite of all of this, Titans fans were willing to lose 4 hours, 55 minutes of sleep on average to watch their team in the playoffs – more than anyone else, including Pats fans.

Like the Titans, Chargers (4 hours 52 minutes), Jaguars (4 hours and 42 minutes), and Redskins fans (4 hours and 38 minutes) were also willing to lose precious shut-eye for the chance to see a playoff victory. Unlike the Titans or the Jaguars, though, neither the Los Angeles Chargers nor the Washington Redskins earned a chance to play in the 2018 postseason, perhaps begrudgingly giving fans a few extra hours of valuable slumber.

Division matchups in the NFL don’t just carry some serious playoff implications, they also produce some of the best rivalries in the game. Whether it’s Packers v. Bears, Cowboys v. Redskins, or Ravens v. Steelers, NFL fans get to see some of the most exciting matchups of the season twice a year. While most analysts agree these rivalries are some of the most exciting and memorable meetings, die-hard fans may be more committed to sacrificing sleep to watch these matches play out. 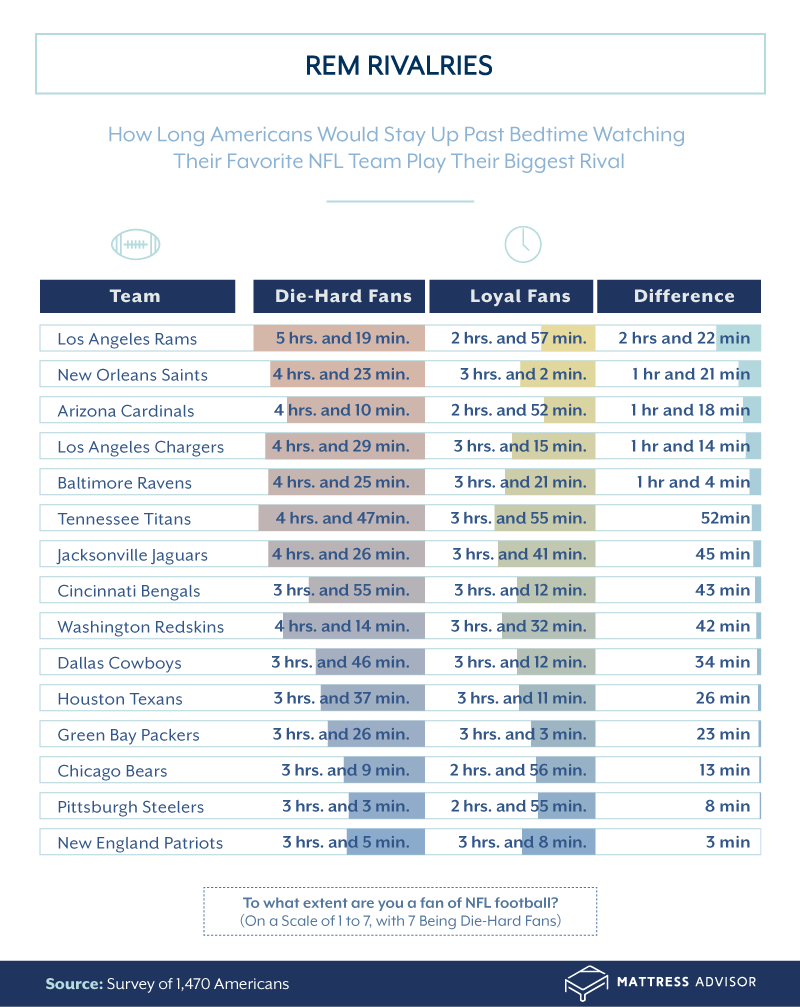 Die-hard fans of the newly relocated Los Angeles Rams were willing to stay up for 5 hours and 19 minutes past their usual bedtime to watch the Rams play their biggest rivals. In the NFC West, that means fans are putting off significant shut-eye to watch the Rams play teams like the San Francisco 49ers. Going as far back as the ’50s, the Rams and the 49ers have a sordid past that still manages to get fans fired up every season. Loyal Los Angeles Rams fans might not share the same level of dedication as die-hards – they were only willing to stay up an extra 3 hours for those rivalry matchups.

Fans of the New Orleans Saints (whose rivals include the Atlanta Falcons and the Carolina Panthers) were willing to give up 4 hours and 23 minutes of sleep to watch a rivalry game, followed by fans of the Arizona Cardinals, Los Angeles Chargers, and Baltimore Ravens (though they may wish they hadn’t after the #MinnesotaMiracle). Perhaps it’s their near-constant winning records over the last decade, but die-hard fans of some of the most successful teams, including the Pittsburgh Steelers and the New England Patriots, were among the least willing to give up any additional time between the sheets to watch their team play a rival.

Whether it’s a regular season matchup or a postseason clash, it can be hard to properly convey in words what it feels like to lose – for players and fans alike. Between the anger, frustration, and downright disappointment, coping with defeat could keep you tossing and turning through the night. In fact, recalling some of our most negative reflections before bedtime may be a serious roadblock to rest and relaxation, according to successful entrepreneurs, for some NFL fans. 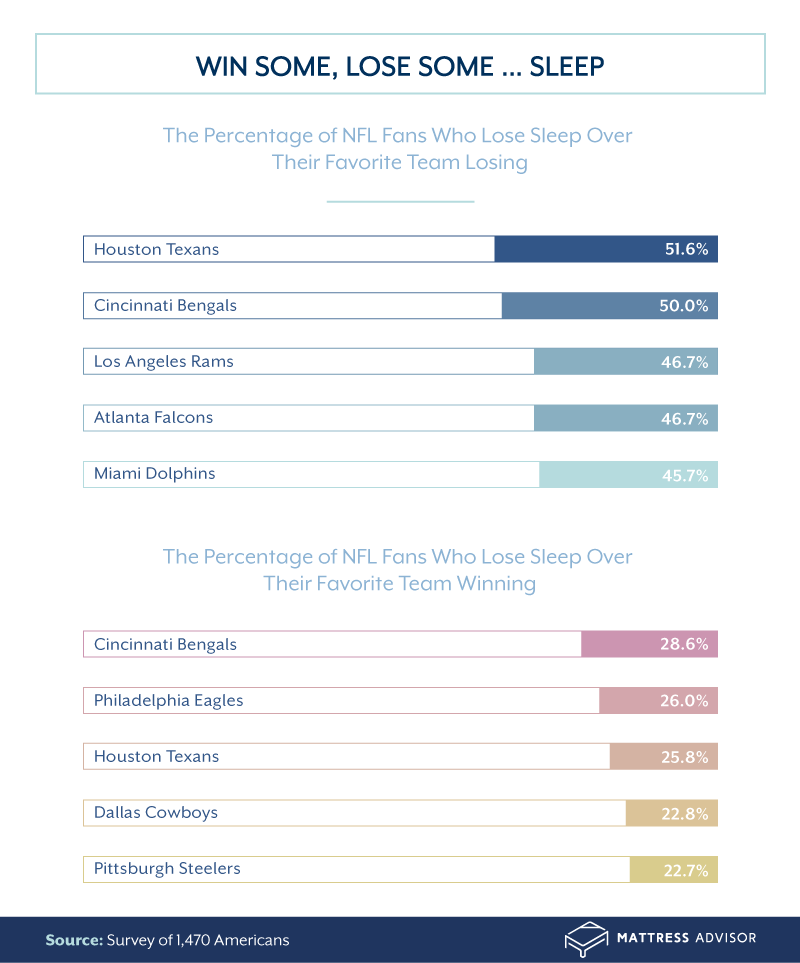 Nearly 52 percent of Houston Texans fans admitted to losing sleep after a loss, followed by half of Cincinnati Bengals fans. In 2017, the Texans ended their season at just 4-12, leaving some Texans fans with six straight weeks of both defeat and potentially sleepless nights. The Cincinnati Bengals finished just slightly better at 7-9, though it’s been 27 years since Bengals fans experienced a postseason victory.

Losing may keep more fans up at night, but winning could have a similar effect. Nearly 29 percent of Bengals fans lose sleep after a victory, followed by 26 percent of Philadelphia Eagles fans. Those were a few happy – but tired – Eagles fans this year!

With a three-hour spread across time zones within the continental United States, it is possible that fans may have moved away from their hometown (or where their team plays) and are watching from the East Coast while their team tangos in the West. According to our research, over 43 percent of NFL fans are at least one hour ahead of their team and the time zone they play in. Meanwhile, over 20 percent are locked into at least the same time zone as their favorite team. 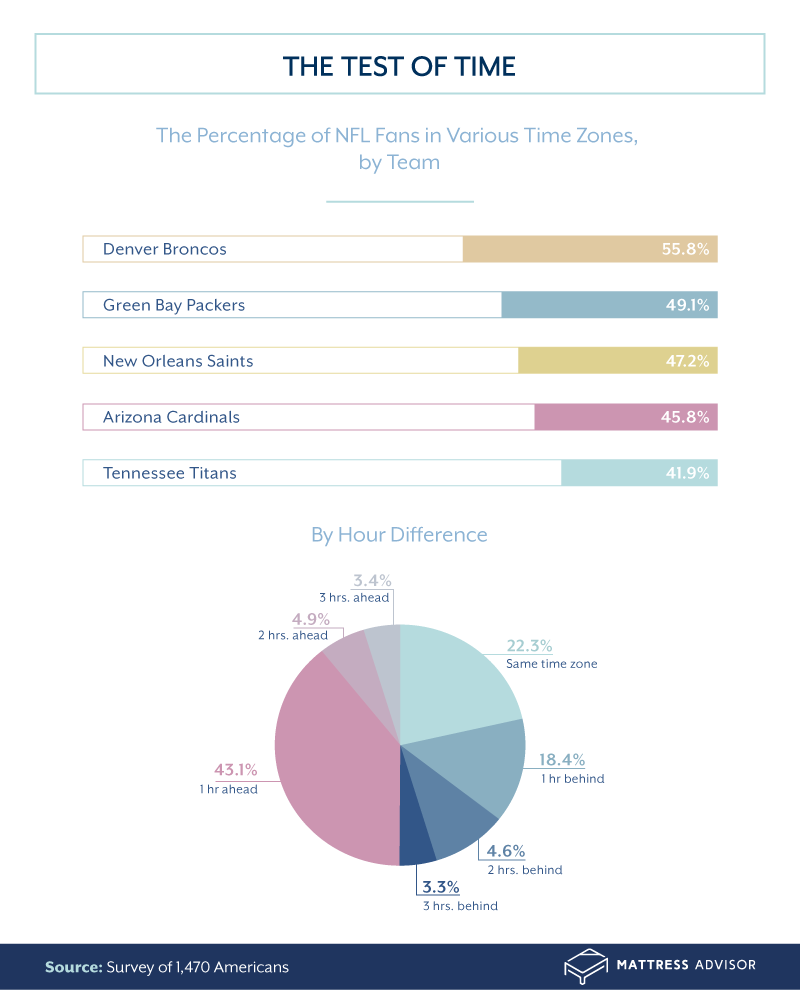 The Denver Broncos have the most fans supporting from different time zones. This season’s finish may have been a far cry, however, from their 2016 victory: 5-11, bottom of the AFC West, and only marginally better than both the Indianapolis Colts and Houston Texas.

Potentially less surprising would be the almost 50 percent of fans who root for the Green Bay Packers across different time zones. But who can blame them? After all, it’s easy to continue to root for a team helmed by great quarterbacks like Brett Favre and Aaron Rodgers.

Whether you’re staying up late to witness a football miracle or wishing you went to bed before kickoff after witnessing a crushing defeat, NFL fans shouldn’t have to sacrifice a comfortable night’s sleep as well. Mattress Advisor provides better protection than the best offensive line, making sure you select the best mattress for your sleep needs. Don’t get sacked and fumble on one of the most important purchases you’ll make.

We surveyed 1,470 Americans from Amazon’s Mechanical Turk and Reddit. Sixty-six percent of our participants were male and 34 percent were female. Participants ranged in age from 18 to 74 with a mean of 34 and a standard deviation of 11 years. Participants were excluded if they failed the attention check questions or entered data that were inconsistent across the board. We weighted the data to the 2017 U.S. census for age. Hypotheses were then statistically tested.

The data we are presenting rely on self-reporting. There are many issues with self-reported data. These issues include, but are not limited to: selective memory, telescoping, attribution, and exaggeration.

Down … Set … Hike! Do you think our findings will be appealing to your audience? If so, we encourage you to share our study as long as you’re a team player and link back to this page. Be sure to credit MattressAdvisor.com for the execution of this campaign. 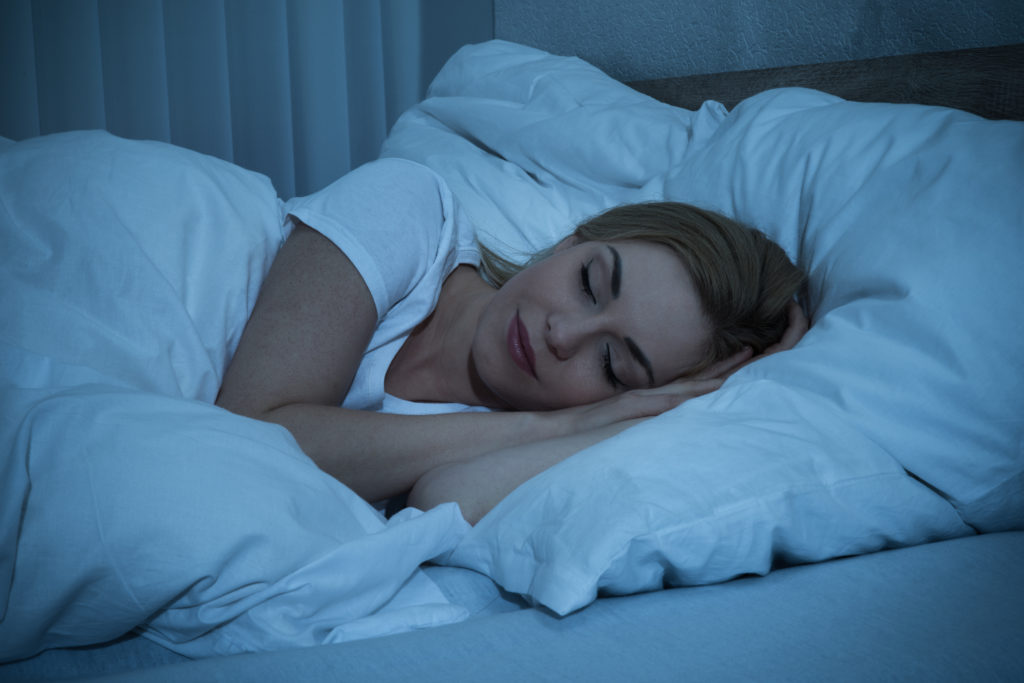 Learn about how the brain controls dreams and why dreams occur. 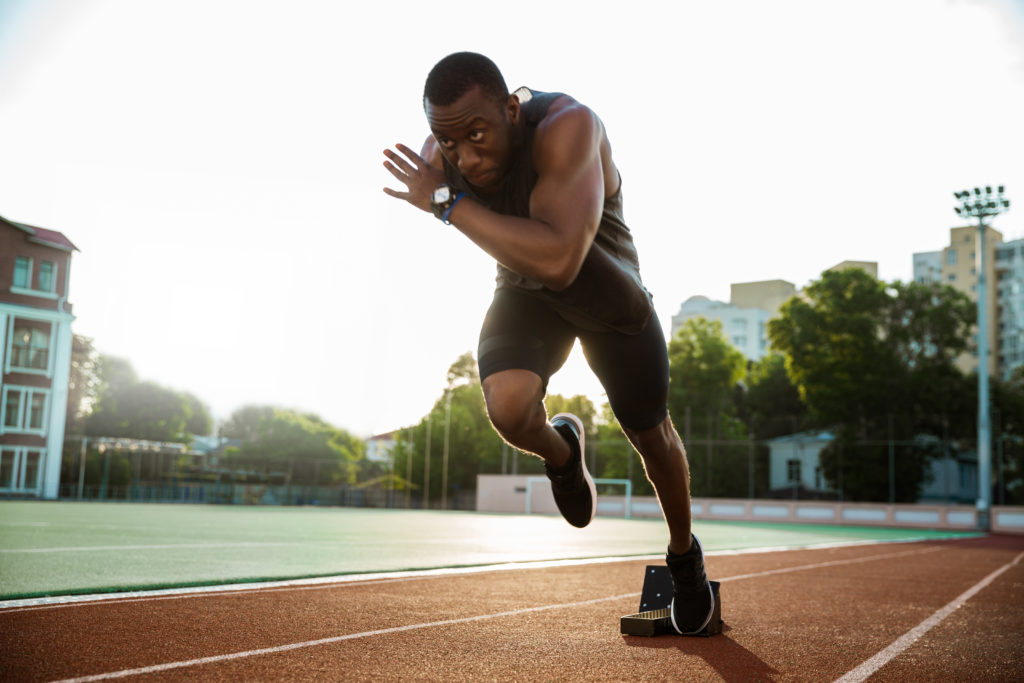 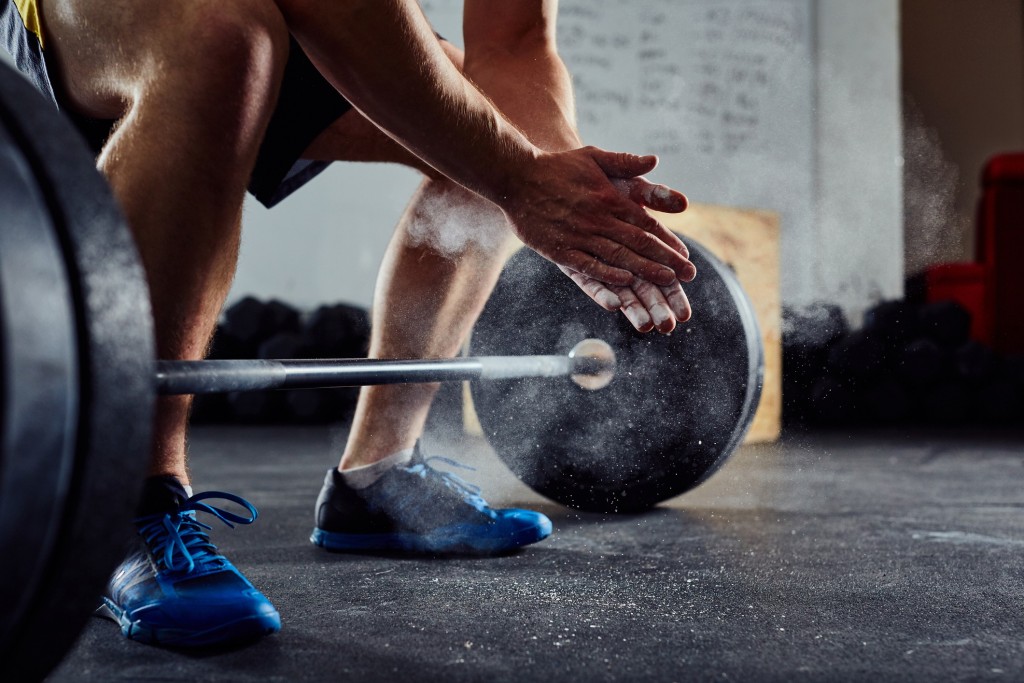 Best Mattresses for Athletes of 2022

If you're an athlete or just like to stay active, check out these mattresses that can help you recover and reduce joint pain while you sleep.