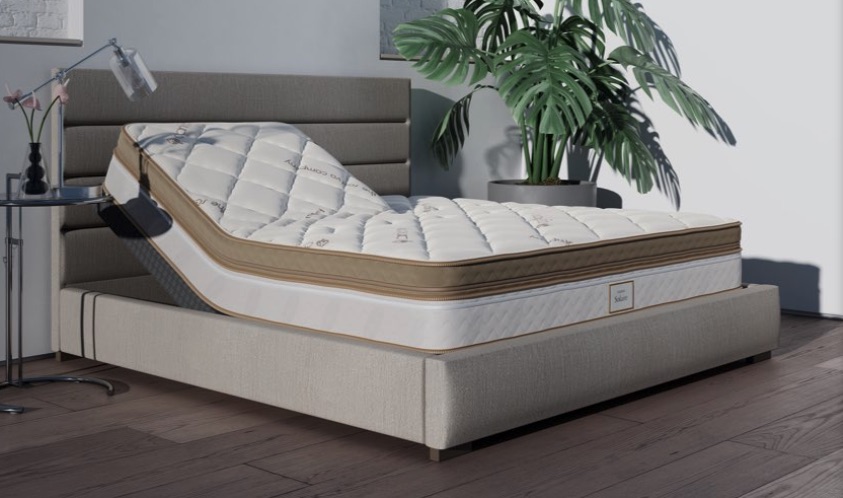 Shopping for an adjustable air bed? The Saatva Solaire and the three mattresses in Sleep Number’s Innovation Series are great options. Read on to see which mattress has more of the features you’re looking for, and which best suits your sleep style.

By clicking on the product links in this article, Mattress Advisor may receive a commission fee at no cost to you, the reader. Read full disclosure statement.
At a GlanceSaatva Solaire HighlightsSleep Number HighlightsCompare SizesCompare PricesCompare DesignCompare Testing Scores

When you imagine a high-quality air bed that adjusts firmness with the press of a button, Sleep Number is probably the company that comes to mind. The brand was an innovator in the mattress industry and has expanded its air bed options over the years.

But did you know Saatva, the luxury online mattress company, also offers a comparable air bed? Read on to learn about the similarities and differences between the Saatva Solaire and the three mattresses in the Sleep Number Innovation series.

Saatva Solaire vs Sleep Number at a Glance 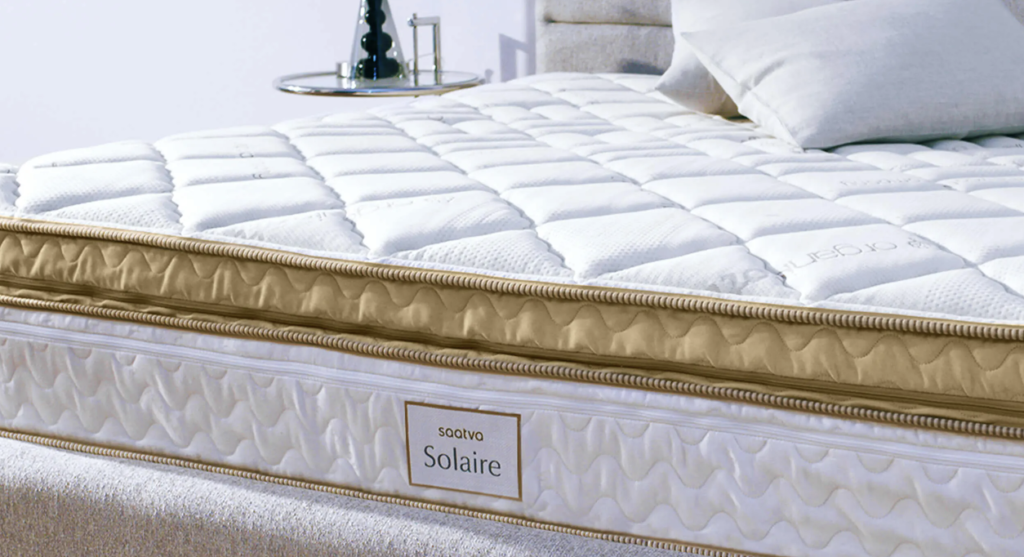 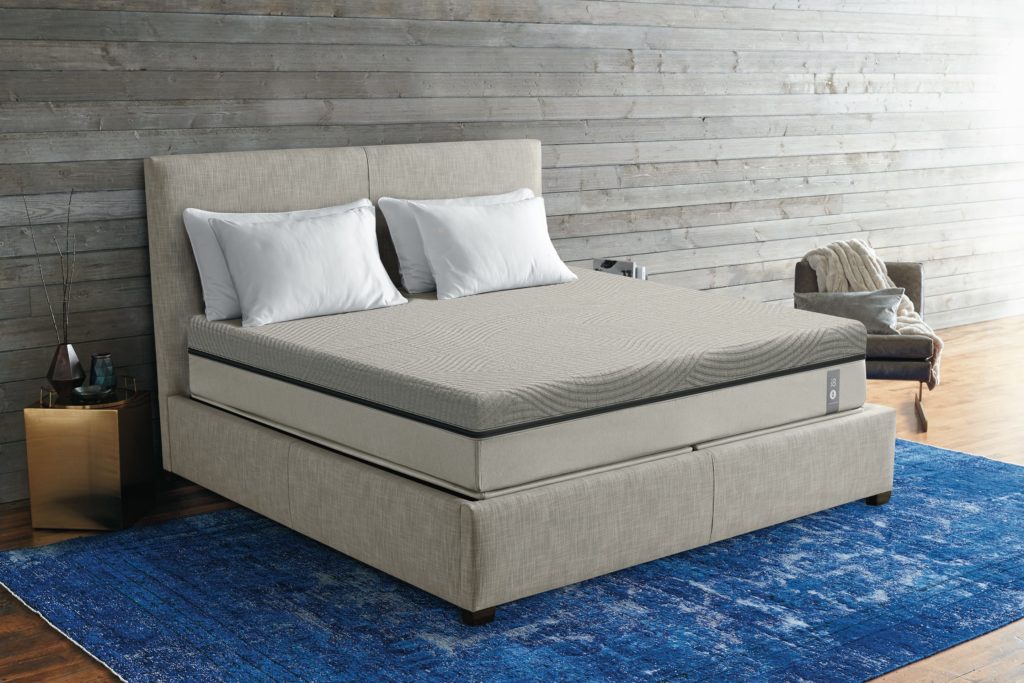 The Solaire and Innovation Series come in standard sizes. In addition, both companies offer an upper flex-top option, allowing you to adjust your head height independently of your partner’s side when using an adjustable base. This is available for queen and king mattresses from Saatva, and king and California king beds from Sleep Number.

It’s also important to consider the cost of an adjustable base for any of these mattresses if you plan to take advantage of features such as head and foot elevation. These bases cost a couple of thousand dollars on top of the cost of the mattress. Also note: Neither Saatva nor Sleep Number accepts returns on adjustable bases.

Keep in mind that the prices below do not include discounts, promotions, or exclusive Mattress Advisor deals. For more information on current discounts, visit our mattress deals page.

While the Saatva Solaire and the Sleep Number Innovation Series share much in common as luxury air beds, they vary in their construction. Below, we’ll explore each bed layer by layer.. 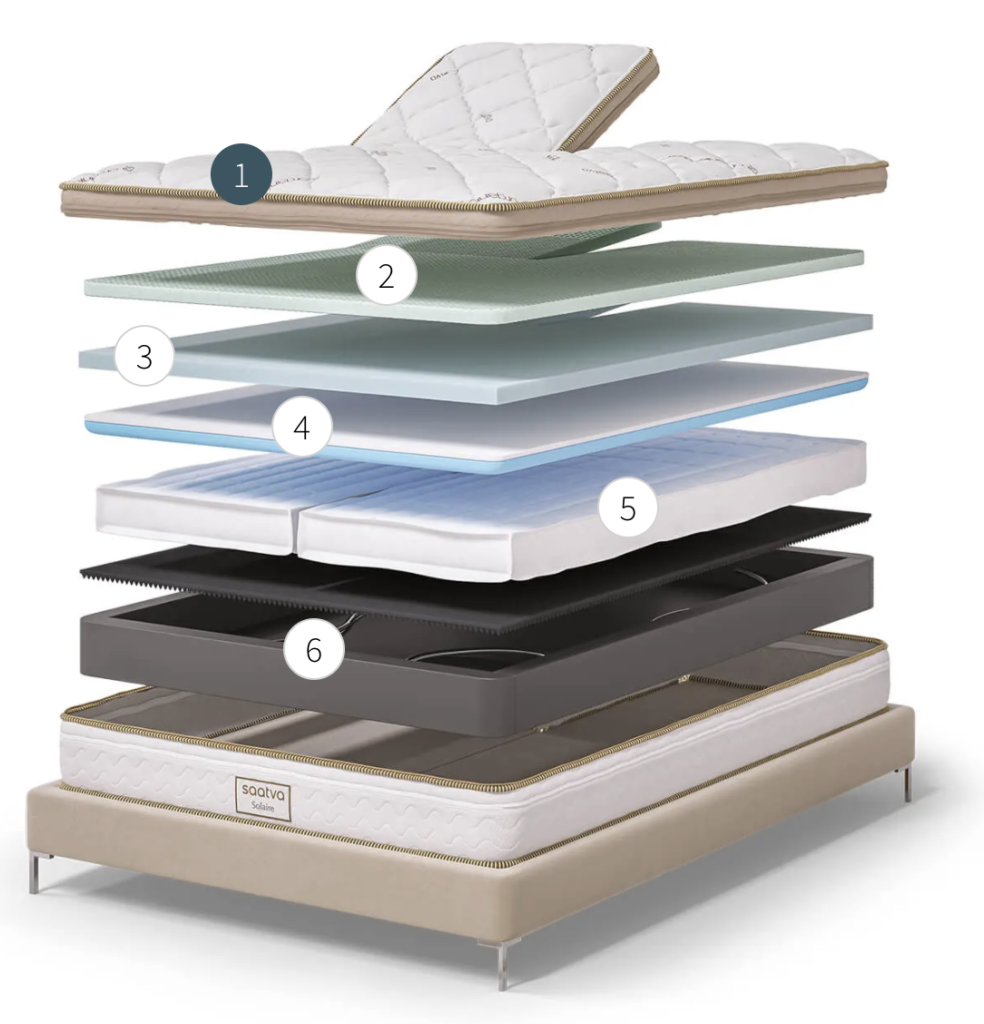 Inside the Saatva Solaire

The Saatva Classic consists of five layers, designed especially for comfort and lumbar support. Because it’s available in plush, luxury firm, and firm, the mattress is a great fit for many sleepers.

An organic cotton cover and Euro pillow top bring a luxurious and comfortable feel to the Saatva Classic. This layer differentiates the three firmness levels, as the density of the foam varies between plush, luxury firm, and firm.

Next, the back support layer is crafted especially for lumbar support. Saatva uses copper wire to reinforce a layer of high-density memory foam across the lumbar region, delivering support and contouring.

The first coil layer’s individually pocketed coils react to your movement, keeping you comfortable while changing sleep positions. The coils are sturdier in the center of the bed, further enhancing lumbar support.

The Saatva Classic’s edge support is great, thanks to the next layer of high-density foam rails. This layer exists solely for edge support, extending your sleep surface and providing exceptional stability along the bed’s edges. 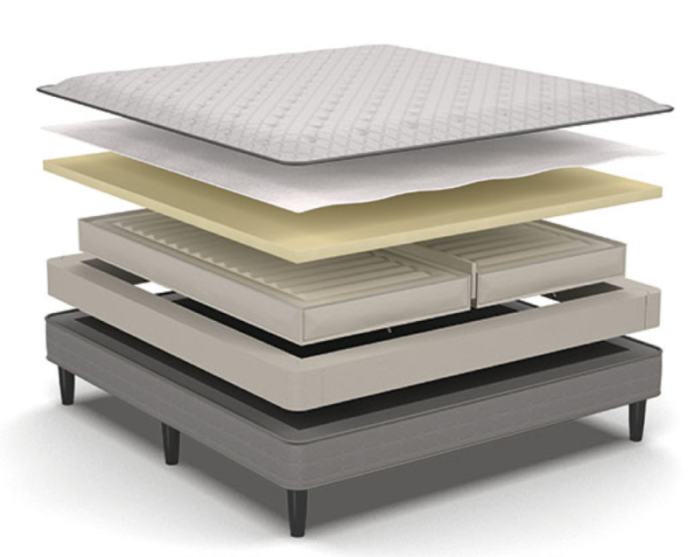 The Sleep Number Innovation Series consists of three mattresses, which differ mostly in the structure of their foams. Unfortunately, the company does not share the exact composition of these layers, so there is some mystery in the features and longevity of the comfort system.

The cover of each mattress is a blend of polyester, polypropylene, and elastane designed for cooling and a glove-like fit. Next come the comfort layers, where the mattresses differ most notably.

After the comfort layers, we reach the air chambers that provide adjustable support. Depending on your bed’s size, you’ll find one or two air chambers. Two air chambers allow you to select a different firmness level (or sleep number) for each side.

At Mattress Advisor, we personally test the vast majority of our mattresses. However, because we have yet to apply our rigorous testing to the Innovation Series, we scoured customer reviews to compare with our review of the Saatva Solaire.

Read on to learn where each mattress shines and where it falls short.

Saatva is known for outstanding edge support in the brand’s more traditional mattresses, and it has kept that reputation going with the Solaire. We rated the Solaire at 8.5/10 in edge support—which is a solid score for any mattress, and an amazing one for an air bed.

Unfortunately, the Innovation Series does not seem to have solid edge support, as multiple customer reviews mention drooping or sagging edges.

Edge support is essential for couples who sleep near the bed’s edge and anyone who likes to sit on the bed while getting dressed. It is also vital for older adults and people with limited mobility who rely on sturdy edges to get safely into and out of bed.

Motion transfer is one category in which the Solaire and the Innovation Series both shine. The combination of dual air chambers and thick foam comfort layers drastically minimizes how much you feel your partner’s movement.

This is important for restless sleepers and those who wake up easily. We gave the Solaire 9/10 for motion transfer, and based on customer reviews, the Innovation Series is similarly outstanding in this category.

While all four mattresses perform well in this category, the Innovation Series has the edge over the Saatva Solaire due to its “Responsive Air” technology. Sleep Number uses sensors in the mattress to determine when to inflate or deflate the air bladder throughout the night. This keeps you at your ideal level of support, regardless of your position.

That said, the Solaire still scored an 8/10 in responsiveness, so it is also responsive to your movements. It’s just hard to compete with a mattress that senses your movements and adjusts while you peacefully snooze.

Which Is the Best Mattress for You

The Saatva Solaire and Sleep Number Innovation Series are luxury air beds that suit most sleepers, including couples and hot sleepers.

We recommend the Solaire for back-pain sufferers due to its five-zoned support, and for older adults due to its outstanding edge support. The Solaire is also a good option for more cost-conscious shoppers, as it offers much of what Sleep Number provides at a lower price point.

The Innovation Series is great for restless sleepers due to its “Responsive Air” technology, and for tech-savvy shoppers who would make use of the sleep-tracking technology.

Finally, the Saatva Solaire is a better choice if you think you may end up returning the mattress if it doesn’t work for you. Saatva’s 365-night sleep trial is longer than Sleep Number’s 100 nights, and you’ll only be out $99 compared to a total of $448 with Sleep Number (delivery plus a return fee).

Looking for a smart bed? Today you have more choices than the Sleep Number Bed. We’ve chosen the top 11 Sleep Number Alternatives to see what’s best. 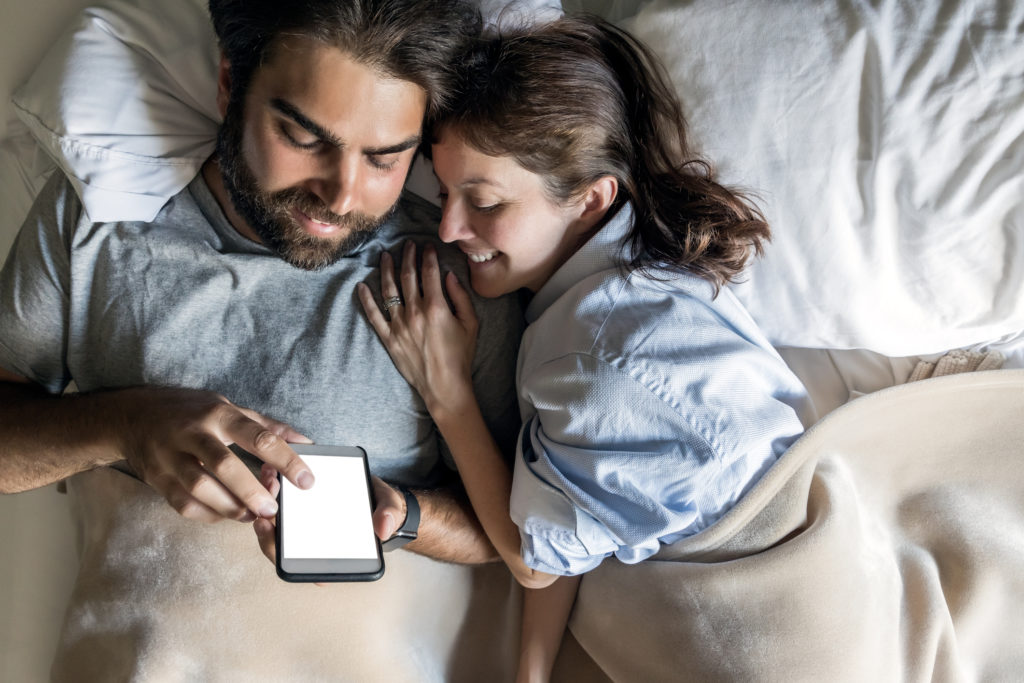 Check out our top picks for beds that can monitor your sleep health and adjust your comfort levels with the click of a button. 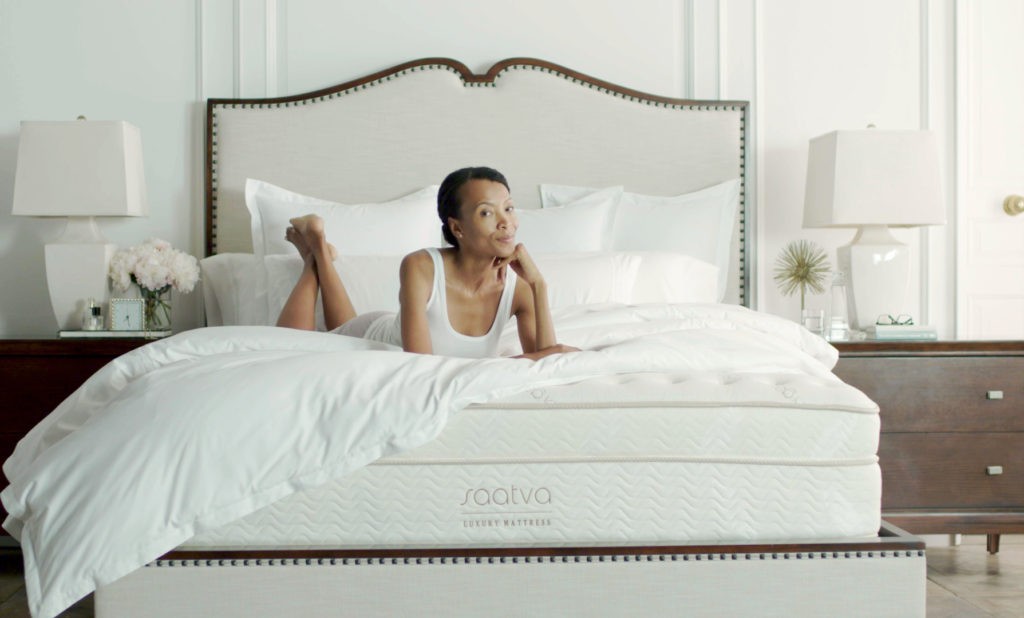