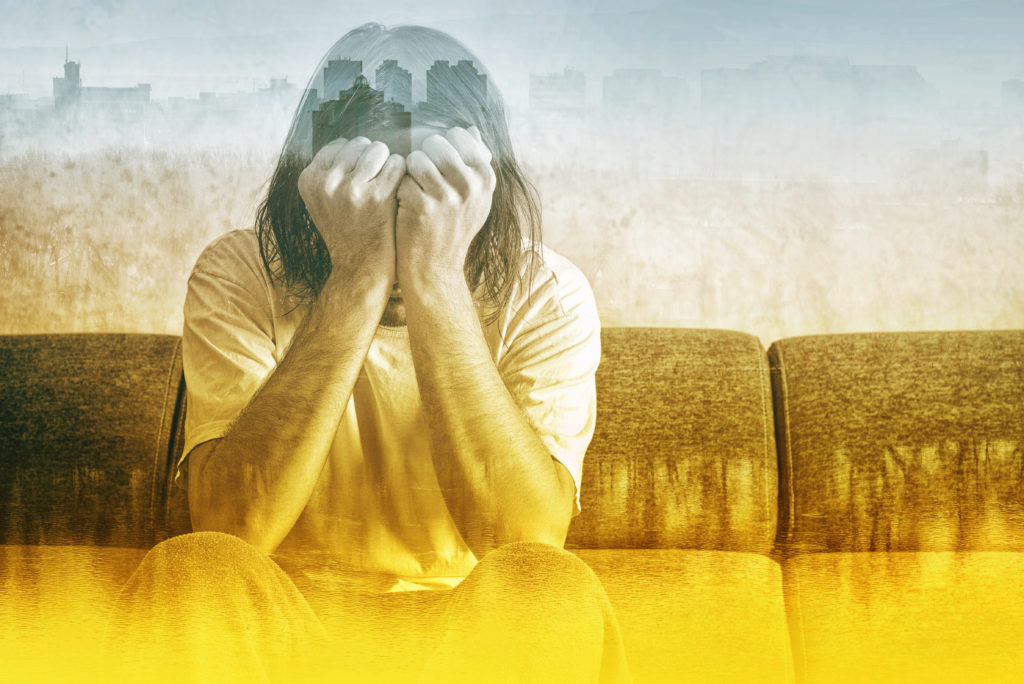 We surveyed over 1,000 people who reported experiencing a traumatic life event that negatively impacted their sleep to better understand the relationship between traumatic events and sleep.

One in 5 American adults will experience mental illness in a given year, and about half of the American population will have a diagnosable mental illness at some point in their life. Still, the stigma attached to these diseases has persisted, leaving those suffering to continue facing discrimination. Whether the stigma comes from outside sources or one’s self, the idea that mental illness is a “bad” thing or something to be ashamed of prevents millions of people from receiving the help they need.

Leaving mental illness untreated can lead to a rapid decline in mental health and an increase in both severity and quantity of symptoms. Sleep disturbance is common across many mental disorders and is extremely prevalent in those who have experienced trauma.

To better understand the relationship between traumatic events and sleep, we surveyed over 1,000 people who reported experiencing a traumatic life event that negatively impacted their sleep. Seeing as the definition of trauma is very broad, we narrowed the qualifying experiences down to the most commonly reported in a preliminary survey: traumatic grief or separation; emotional abuse or psychological maltreatment; a serious accident, fire, or explosion; bullying; physical abuse or assault; serious illness or medical procedure; sexual assault or abuse; and a victim of or witness to domestic violence. Keep reading to learn more.

From Distressed to Deprivation

Despite little being known about why we sleep, scientists have figured out exactly how much sleep we need to stay healthy. Adults require seven to nine hours of sleep every night, with anything less than seven negatively impacting health. But quality sleep can be hard to come by, especially when stress and anxiety levels are high. For those who experience trauma, their quantity and quality of sleep are often diminished. 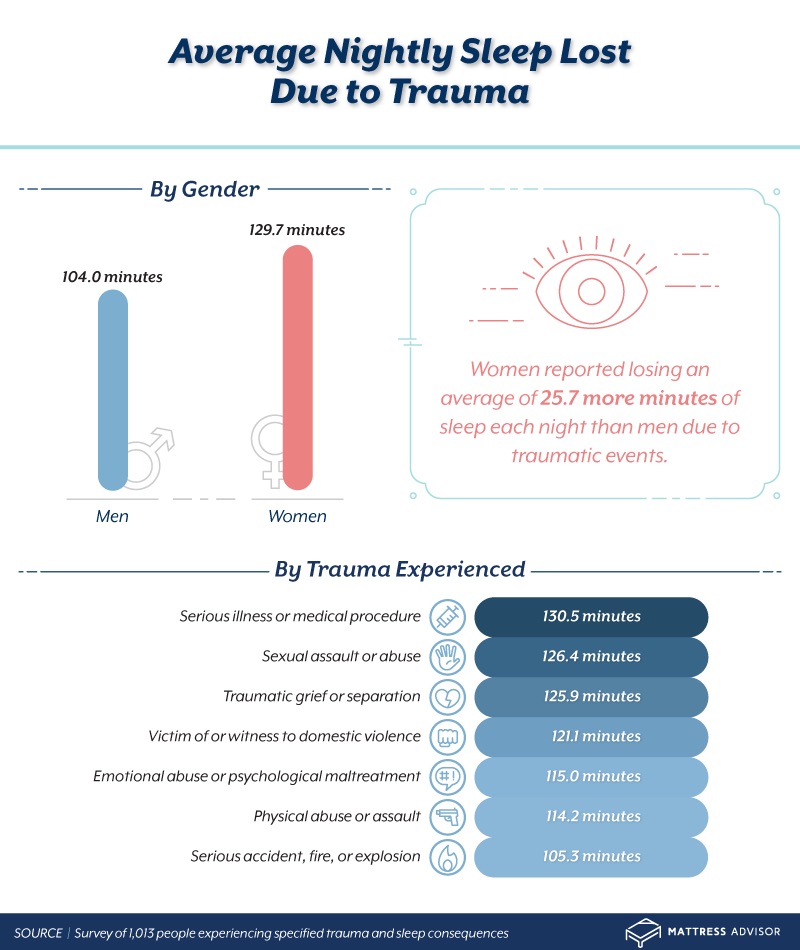 On average, women who experienced one of the traumatic events studied reported losing an average of 129.7 minutes of sleep each night, nearly half an hour more than their male counterparts.

Respondents who reported experiencing a serious illness or medical procedure reported losing an average of 130.5 minutes of sleep, followed by 126.4 minutes lost by those who experienced sexual assault or abuse. Considering the average American only sleeps 6.8 hours each night, losing two hours of sleep due to traumatic events likely means those affected are getting significantly less than the recommended amount of sleep.

Consistent sleep loss can lead to sleep deprivation, adding to the symptoms people may already be experiencing from the traumatic events themselves. Lack of sleep not only leaves you extra drowsy during the day but also can cause overall fatigue, irritability, depressed mood, cognitive deficits, and various physical changes.

A single night of sleep loss can lead to negative effects the next day, but for those who have experienced trauma, sleep loss is most likely to last for months. 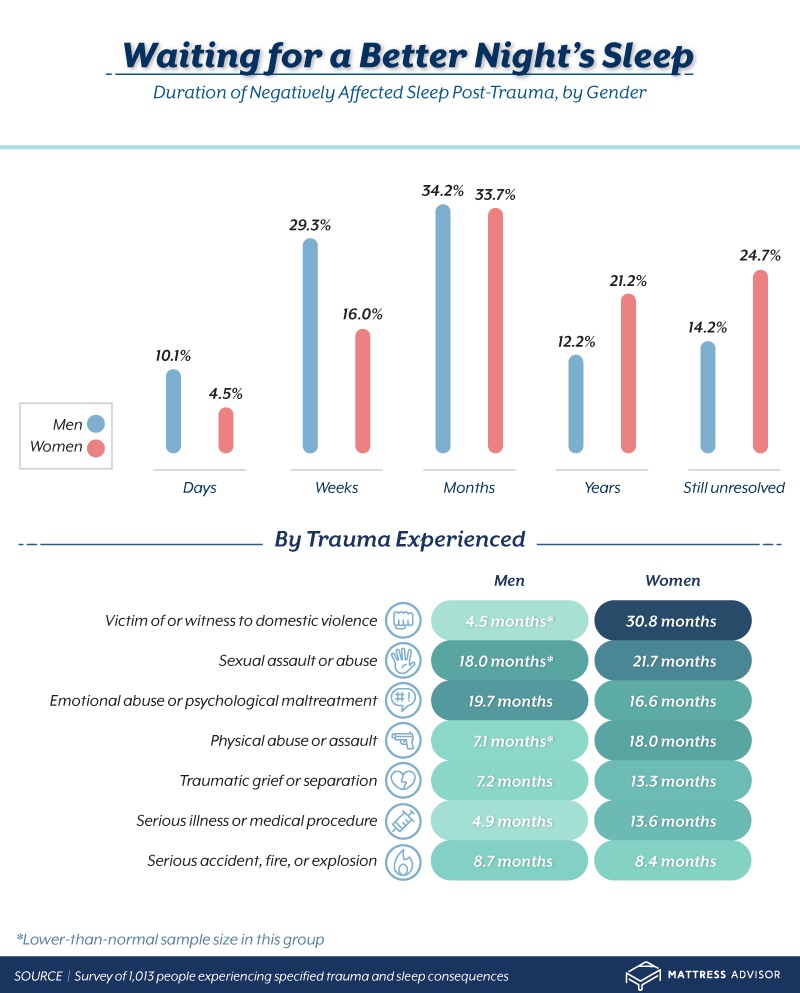 Experiencing a traumatic event often leads to the development of acute stress disorder and post-traumatic stress disorder, with many symptoms involving sleep disturbance. Not only do traumatic events and PTSD cause anxiety and depression symptoms to increase but also many victims experience insomnia, or difficulty falling asleep, and nightmares – both of which have a significantly negative impact on the quality and amount of sleep one even manages to get.

After experiencing a traumatic event, sleep can suffer in a variety of ways. We asked our respondents about the type of sleeping disorder or interfering symptoms that keep them up at night. 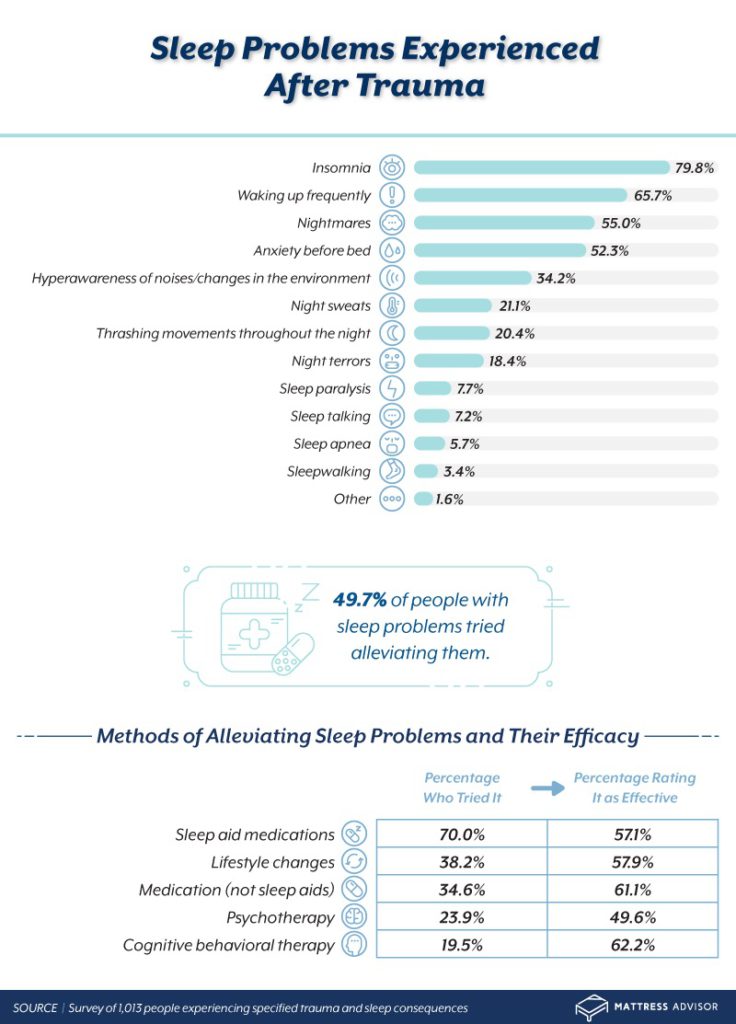 Nearly 80 percent of respondents reported suffering from insomnia, a common condition that can have serious consequences for physical and mental health. Having difficulty falling or staying asleep for a long period increases the risk of stroke, seizures, obesity, heart disease, mental health disorders, and even shortens life expectancy.

Almost half of those with sleep problems reported trying to alleviate them. The majority (70 percent) turned to sleep aid medications, but it was only effective for 57 percent of those who tried it. Although only 35 percent tried medications other than sleep aids, 61 percent found the method to be effective. Cognitive behavioral therapy was rated the most effective method of treating sleep problems, but it was also the least undertaken.

While there are numerous treatments and sleep aids that can help combat insomnia, when insomnia is a symptom of a bigger problem, it’s better to treat the root cause. Otherwise, relief is only temporary.

Your sleeping environment can have a big impact on your quality and duration of sleep. For those who don’t have chronic insomnia, there are environmental changes that can lead to a better night’s sleep. Here are some of the activities respondents engage in to help get some much-needed shut-eye. 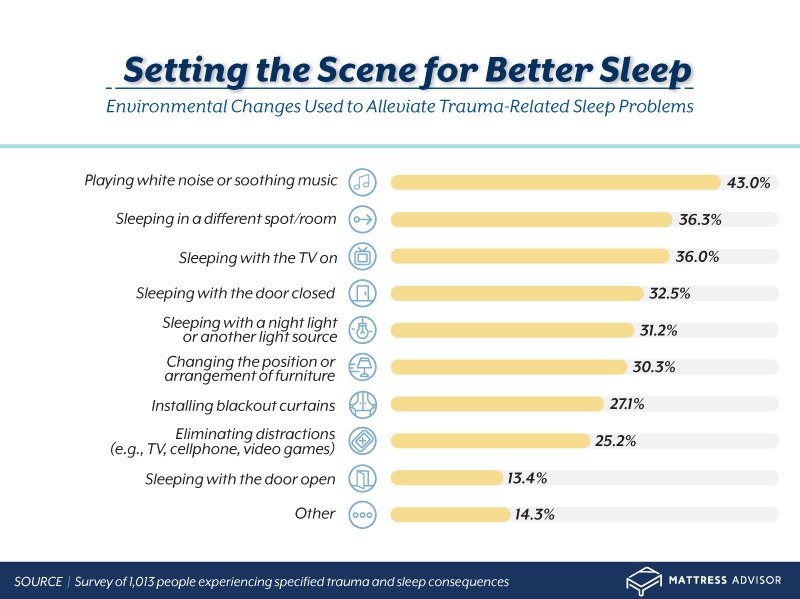 Around 30 percent of respondents changed the position or arrangement of their furniture, and 27 percent installed blackout curtains. Thirty-six percent tried sleeping with the TV on, a change that may do more harm than good. While some background noise may help people fall asleep faster, the blue light and changes in brightness and volume that occur while the TV is on can impact the quality of sleep. Sleeping with the TV on can keep you in the lighter stages of the sleep cycle, preventing your body from experiencing the stages where memories are consolidated and restorative work is done.

Background noise that has been proven to help sleep, however, also happens to be the method most tried. Forty-three percent of respondents tried playing white noise to help them sleep, an evidence-based method that has been proven to work. White noise is very bland and not much fun to listen to, but that is exactly why it aids sleep. Loud noises and changes in volume, like those from TVs, can easily alert the brain to wake up. When white noise is playing in the background, though, other noises are drowned out by the monotone sound, preventing you from being roused from slumber.

Everybody is different and what works for one may not work for another. But when people have shared experiences, even if the details differ, there are certain pieces of advice worth following. 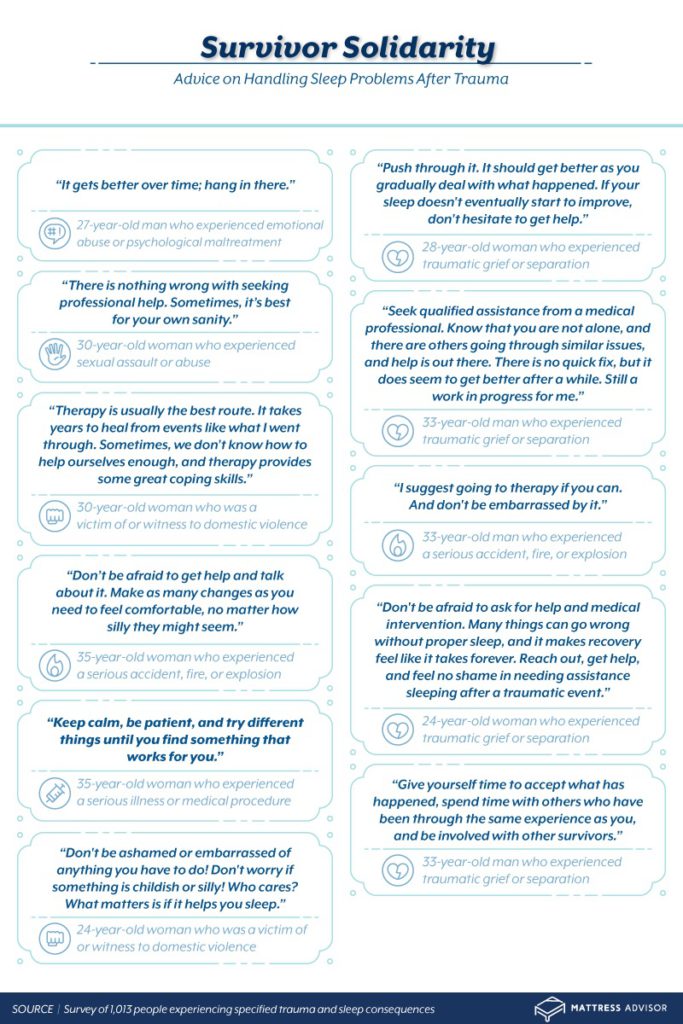 Many of the people surveyed advised that fellow sufferers reach out and get help. Seeking out a professional for treatment is nothing to be ashamed of. It’s important to fight the stigma, and remember you are not alone. Reaching out and seeking help can be life-saving.

Getting a good night’s rest can seem impossible when recurring thoughts keep you from drifting off, and nightmares wake you up, but there is help out there. Don’t be afraid to reach out and ask for a helping hand because you’re not alone. The sleep you’re missing out on can have detrimental effects to both your mental and physical health and can prolong the underlying problem.

If a change in environment is the method you want to try next, it may be time to look at your mattress. A good mattress is key for a quality night’s rest, and at Mattress Advisor, we’re here to help. No need to worry about picking the perfect mattress yourself; just take our Mattress Finder Quiz and let the experts do the work.

We surveyed 1,013 people using Amazon’s Mechanical Turk. Respondents had to report they’d experienced a traumatic event that negatively impacted their sleep to qualify for the survey.

For this study, we looked at a specific set of traumatic events. We used the types of trauma and violence categories from the Substance Abuse and Mental Health Services Administration and ran a preliminary survey. The final list of traumas we decided to explore in this project was determined based on the results of the preliminary survey. If a survey participant did not select one of the traumas presented in this project, they were disqualified from the survey.

Neglect and bullying were also traumas included in our study. However, due to low sample sizes for these traumas, they were excluded from our visualization of the data.

Respondents were 61.8 percent women and 38.2 percent men. The average age of respondents was 36.5 with a standard deviation of 11.1.

All averages included throughout this project were calculated to exclude outliers in the data.

In parts of this project, the averages for the number of months of negatively affected sleep after trauma are broken down by gender and trauma experienced. It should be noted that some of the groups had lower sample sizes than normal. These have been marked in the study.

Sleep problems occurring after trauma are discussed in this project. In addition to the options included here, respondents were also given the option of reporting dreams as a sleep consequence after trauma. This was excluded from the final visualization of the data.

We all face difficult experiences in our lives. Every type of trauma impacts us in many ways, and that can often include how long and how well we sleep. If someone you know is struggling or you want to start a conversation about mental health, you are free to share this study. If you choose to do so, please link back to here so that people have the chance to review the entire project and its methodology.