Learn about the common sleep problems veterans and other PTSD sufferers face.

The term Post Traumatic Stress Disorder, commonly referred to as PTSD, was coined in 1980 by the American Psychological Association when it formally became recognized as a diagnosable condition after the Vietnam War. However, war did not create the condition itself. For as long as humans have lived and experienced traumatic events, whether it be battle, abuse, accidents, or a natural disaster, a psychological response has followed, even if we didn’t have a name for it.

It’s estimated that 70 percent of the adult population in the US has experienced a traumatic event at some point in their lives — 20 percent of those adults go on to develop PTSD. At any given time, 13 million Americans are suffering from the negative effects of PTSD.

A traumatic event is defined by a terrifying ordeal that a person has experienced, witnessed, or learned about, especially one that is life-threatening or causes physical harm. The experience causes that person to feel intense fear, horror, or a sense of helplessness. Traumatic events such as these put an individual under extreme stress. If this stress persists in an individual, it’s possible for their brain chemistry to be disrupted or even altered. It’s believed this disruption of the brain’s chemical makeup is what leads to the development of the psychological condition known as PTSD.

There are three categories of symptoms associated with PTSD. If an individual experiences all three for longer than one month or any one of the symptoms cause distress that interferes with daily life, family, or work, then they may be diagnosed with PTSD.

Whether through recurring nightmares, intrusive flashbacks, or distressing memories, individuals with PTSD commonly re-experience the traumatic event on a consistent basis. These thoughts can cause extreme physical and emotional reactions.

2. Avoiding Reminders of the Event

Another common symptom of PTSD is emotional numbness or avoidance of certain places, people, thoughts, and activities that remind the individual of the trauma. Oftentimes, PTSD sufferers emotionally and/or physically withdraw from family, friends, and other responsibilities of daily life.

3. Being Constantly On-Guard or Hyper-Aroused

PTSD sufferers also tend to be highly aroused or on-guard at all times. This increase in arousal often leads to difficulty sleeping and concentrating, as well as, increased anger and irritability.

There are also a number of indirect symptoms related to PTSD. Some of these include drug abuse and the development of mental illnesses like anxiety or depression.

The Impact of PTSD on Sleep

Outside of the fact nightmares and hyper-arousal are direct symptoms of PTSD that interrupt sleep, research shows individuals that suffer from PTSD are 75 percent more likely to suffer from insomnia than those who do not. In most cases, this is due to the constant state of stress these individuals live in.

Stress That Leads to Insomnia

Our body naturally produces a hormone called cortisol. Cortisol, often referred to as the “stress hormone,” is produced in the adrenal glands throughout the day and plays a large role in our “fight or flight” response. At night, cortisol levels should naturally decrease. However, when our body lives in a constant state of stress, cortisol levels stay elevated. As a result, our bodies can’t relax enough to fall asleep. It’s because of elevated cortisol levels that PTSD sufferers are constantly aroused and unable to fall asleep.

During REM sleep, the deepest stage of sleep where we experience dreams, our brain also processes memories and emotions. A nightmare is a disturbing dream often associated with negative emotions. The occasional nightmare is common in all people of all ages. However, some individuals, such as PTSD sufferers, experience nightmare on a consistent basis which causes distress, sleep deprivation, and ultimately a fear of going to sleep.

Chronic nightmares are often treated with Imagery Rehearsal Therapy (IRT), where a person whose having nightmares that upset them reimagines the ending of the nightmare while they are awake so that it no longer disturbs them. Replaying the nightmare with the “re-imagined” ending over and over while awake has been shown to reduce how often nightmares occur.

Fifty to 65 percent of PTSD sufferers simultaneously battle addiction. The relationship between PTSD and substance abuse is complex, but it’s believed that individuals under intense stress are more likely to turn to drugs or alcohol as a means of escape because they increase pleasure, decrease anxiety and provide a distraction from difficult emotions. 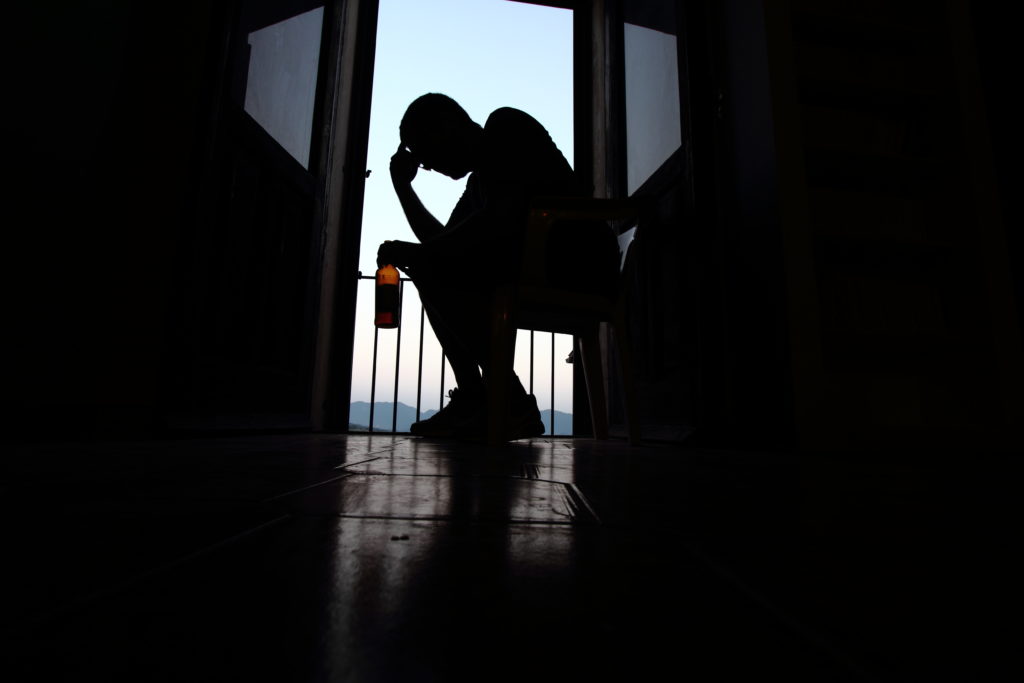 However, the same drugs PTSD sufferers turn to for release also cause sleep disorders. This is because drugs interfere with neurotransmitters, such as serotonin and norepinephrine, that help regulate sleep. Mistakenly, drug abusers turn to alcohol for sleep. But although alcohol is a depressant that’s thought as a sedative that makes you sleepy, it actually worsens your sleep quality and prevents you from entering deep, restorative REM sleep.

Unfortunately, the symptoms of PTSD go further than the mind—research shows a connection between the psychological disorder and physical ailments such as pain. One reason PTSD and pain occur together is obvious: many traumatic events cause serious injuries that lead to chronic pain. The more traumatic the event, the more likely severe injuries occur and PTSD develops. But this isn’t the only reason PTSD is related to pain.

The second reason PTSD and issues with chronic pain occur simultaneously is that hyper-arousal, what we know to be as one of the most common symptoms of PTSD, can cause persistent muscle tension that leads to chronic pain. Pain makes it difficult to sleep. To fall asleep, your body must be relaxed; however, discomfort from pain prevents you from relaxing, making it difficult to fall asleep.

Related: Best mattress for back pain

Sleep Tips and Treatment Options for Individuals with PTSD

Despite the ailments individuals with PTSD face, there is hope for finding relief from these troubling symptoms, especially troubled sleep. 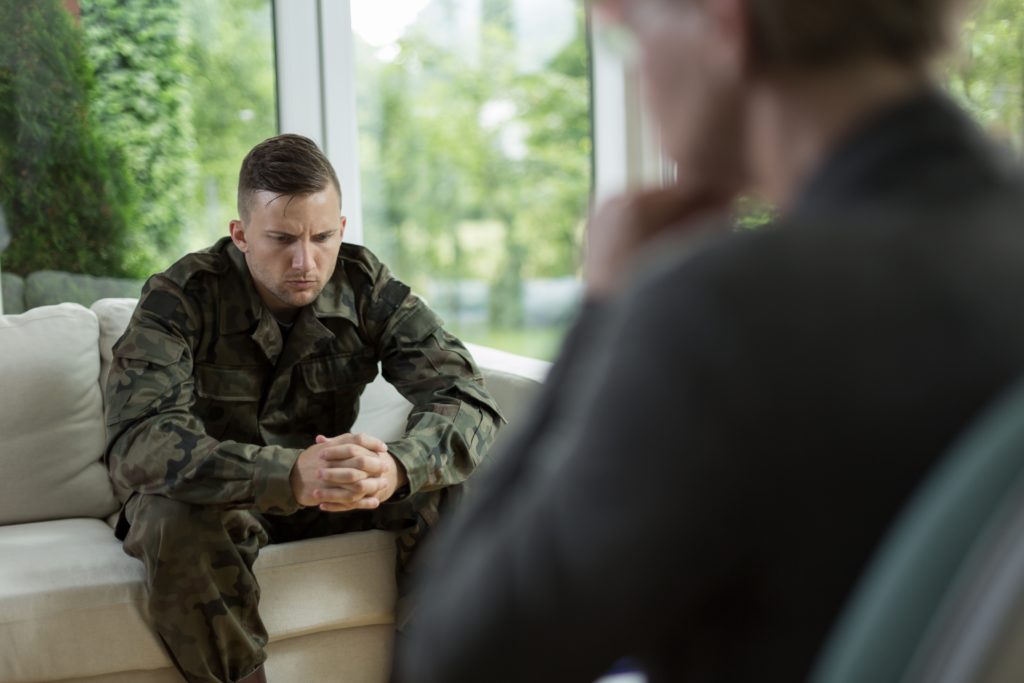 Also known as CBT-I, this method of therapy consists of frequent counseling sessions designed to discuss sleep problems and strategies for managing them. For example, IRT for nightmares. This type of therapy helps identify the connection between the mental health condition, in this case PTSD, and the sleep disorder.

This is a similar therapy to CBT in that it is discussion based. However, psychotherapy is not solely focused on sleep. Rather, it’s designed for individuals to work through their traumatic experience and the anxiety it causes them. As these mental health issues, which are the root of the problem, are mended, healed sleep typically follows.

Since hyper-arousal often plagues PTSD victims, relaxation therapy works to help these individuals find a way to calm down. Although this takes regular practice, eventually, PTSD sufferers may be able to find a way to calm themselves down at night so they can fall asleep.

Sleep hygiene is just a fancy way of addressing your sleep habits and environment as a whole. Practicing good sleep hygiene means making sleep a priority, sticking to a bedtime, wind down at night, and creating a calming environment conducive for sleep. Sleep hygiene also incorporates the sleep products you use—having a supportive mattress, the correct pillows, and comfy sheets.

If you are suffering from troubled sleep, take a look at your sleep hygiene from a holistic point of view. Is your mattress contributing to your pain problem because it has lost its support? Is your room cool, quiet and dark? Are you avoiding blue-light from technology before bedtime? When mental health conditions that are out of your control impact sleep, do your best to make informed decisions about your environment that you can control.

Many vets seek care in community medical settings with doctors that may not be aware of their military history. As a result, they may not inquire about PTSD and any other sleep-related issues. Therefore, anyone, vet or not, who are concerned they may have PTSD or insomnia needs to raise this issue with their physician. Seeking help from medical professionals is an important first step in managing the effects of this psychological disorder.