Of all the things couples share with each other – hopes, dreams, dessert – the mattress couples share is among the most important elements of coexistence.

While some of our most intimate moments happen in bed, it’s also the place where we can feel intense frustration: snoring, sweating, tossing and turning. In some sense, the way a couple shares a bed echoes the dynamics of their relationship. Intimacy, independence, selfishness, sacrifice – it’s all lurking right there under the covers.

Given the significance of shared sleeping arrangements, we set out to learn which sleeping positions men and women favored most…and least. To do so, we surveyed 1,000 Americans in relationships about how they like to cozy up to their partner at night (or retreat to opposite ends of the mattress).

We then studied their sleep quality, sex lives, and relationship satisfaction to understand the link between successfully sharing a bed and staying happy with a partner. Read on for a deep dive into cuddling and companionship.

To start, we asked respondents who were in a relationship what their favorite way to sleep with their partner looked like and then broke out responses among males and females.

Many respondents were pretty fond of having some space to themselves when sleeping. For men and women alike, the most popular position involved partners sleeping on their sides facing away from each other, with a small amount of space between their bodies. Sleep scientists promote curling up on one’s side, citing benefits ranging from improved breathing to reduced lower back pain.

The second and third favored sleeping positions for both genders also involved partners lying on their sides, although slight differences in preference emerged here. While intimate spooning with the man in the outside position ranked second for female respondents, it fell to third place for men.

Conversely, male participants ranked spooning with a little more space between partners second overall, while women placed it as their fourth favorite. While some have suggested men take issue with spooning in general, perhaps they simply prefer a bit more breathing room between bodies.

Although women demonstrated a preference for physical contact with their partner, they loathed taking on “big spoon” duties in bed.

Interestingly, men didn’t seem to mind assuming the little spoon role as much – it didn’t rank among their five most annoying positions. But guys’ least appreciated position of all was lying on their backs with their partner curled supine on top of them.

A large number of women reported disdain for the traditional spoon as well. In fact, our data shows that there’s an agreement among genders: Women and men shared three of their top five most annoying arrangements. Female respondents were more likely to disdain sleep in opposite directions, though, whereas men didn’t appreciate the face-to-face embrace. 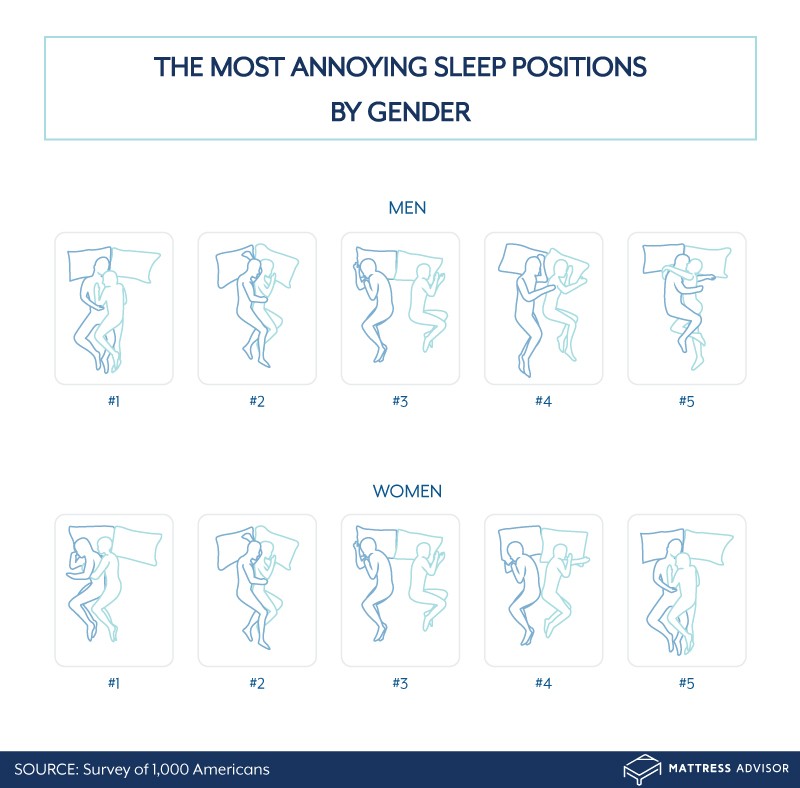 Shifting in Our Sleep

As you’ve probably experienced, most people aren’t entirely immobile at night. In fact, our data suggest that couples change their positions in bed overnight 76.5% of the time.

Among those who began the night with their back to each other with a bit of space in between, just 37.5 percent remained that way. In nearly a quarter of these cases, the space between sleepers increased during the night, and 18.6 percent who slept this way ended up with the male partner sleeping on his stomach far below his pillow, and the woman lying on her back.

Among sleepers who began facing opposite directions with more space between them, a majority maintained this position until the morning. But 13 percent said the space between them decreased slightly, and another 16.3 percent awoke with the man on his back and the woman on her stomach.

Spooners were the least likely to maintain their original arrangement, with more than a third flipping to face away from each other during the night.

Lying Down for the Long Haul

As the initial spark of love settles into solid companionship, do couples’ preferred sleep positions change as well? Our data suggest that as relationships mature, couples tend to opt for more separation while sleeping.

After the five-year mark, the popularity of sleeping back to back with some room in between partners grew steadily, ultimately becoming the sleeping arrangement of choice for 37.5 percent of those with relationships longer than 30 years. Some have suggested that this position indicates a lack of connection between a couple, but it could also just mean the honeymoon phase is over and getting quality sleep becomes more important than intimate cuddling.

A corresponding decline in close spooning emerged across the years. After peaking in popularity among those who had been with their partner for one to three years, this position’s popularity dropped significantly.

After a slight uptick for those with five to 10 years in their relationship, the percentage of couples practicing intimate spooning declined steadily. After more than 30 years together, just 6.3 percent of couples opted for this sleeping arrangement. 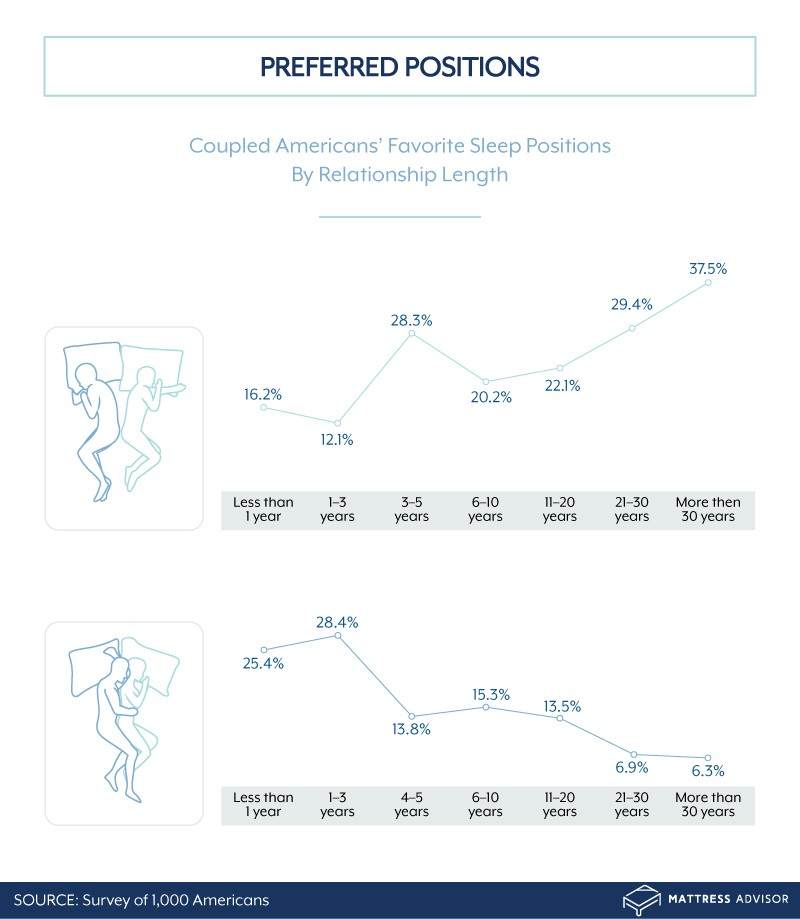 While the benefits of good sleep extend to virtually every aspect of our lives, the upside of adequate rest can also be visible in our relationships.

Multiple explanations might account for this trend: Perhaps those unhappy with their partner have more difficulty sleeping due to the resulting stress. However, a growing body of research suggests a lack of sleep intensifies conflict among couples.

In one recent study, researchers found marital disagreements tended to result in hostility far more often when one or both partners were consistently skipping needed sleep. Perhaps it’s no coincidence marital satisfaction declines once couples have kids – babies have a habit of disrupting their parents’ shut-eye. 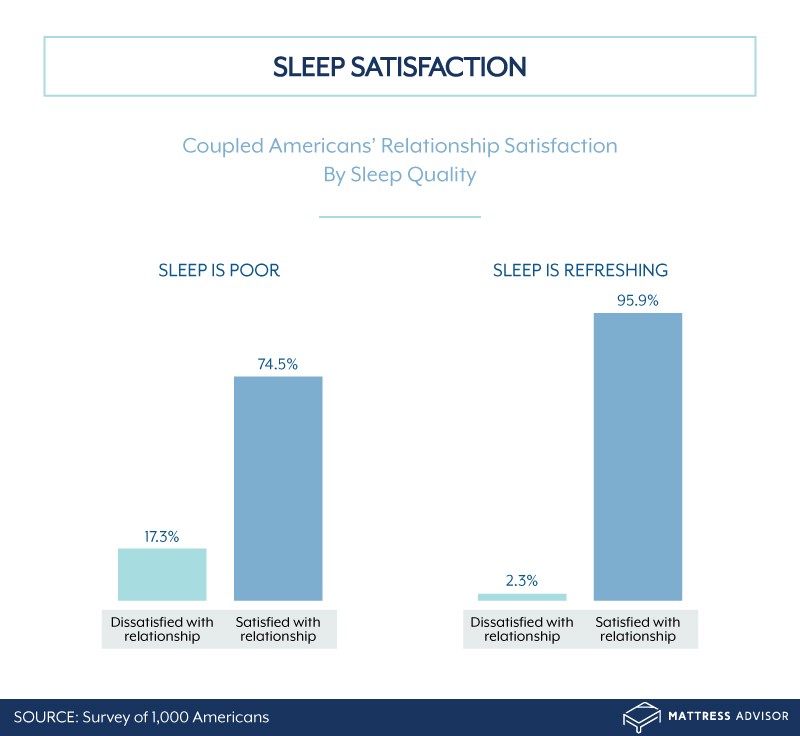 Aside from general relationship satisfaction, which positions inspired physical intimacy most often? Our findings suggest positions that already involved quite a bit of contact translated to sex most easily. The sleeping arrangement most correlated with sex featured couples facing each other with limbs intertwined. Close spooning with the man on the outside took second place. 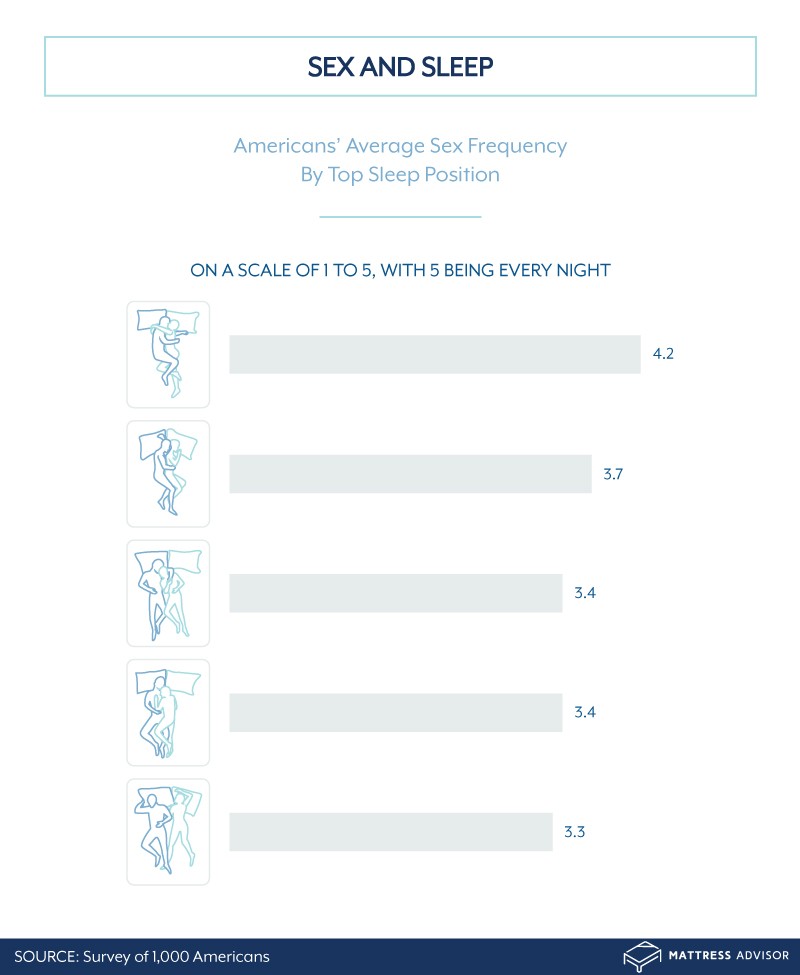 For some respondents, there were instances where no position could make sleeping with a partner palatable. Such circumstances are more common than you may think: Recent research suggests almost 1 in 4 American couples sleep in separate rooms.

Among our respondents, reasons for splitting up at bedtime were largely practical – they chose to sleep solo to preserve their precious rest.

Snoring was the top culprit in this regard, causing 23.5 percent of separate sleeping scenarios. These partners may have good reason to keep their distance; recent data suggest we lose about an hour of sleep for each night we share a bed with someone who snores.

Another top reason for sleeping apart was different sleep schedules. Many experts suggest these differences often have a biological origin, recommending couples adapt if their circadian rhythms diverge rather than trying to change one another.

Illness was the third most common reason, as anyone wary of catching his or her partner’s flu may well understand. But for 11.1 percent of those surveyed, sleeping separation resulted from an argument of some kind. In this sense, the old trope of a banished partner sleeping on the couch remains relevant. 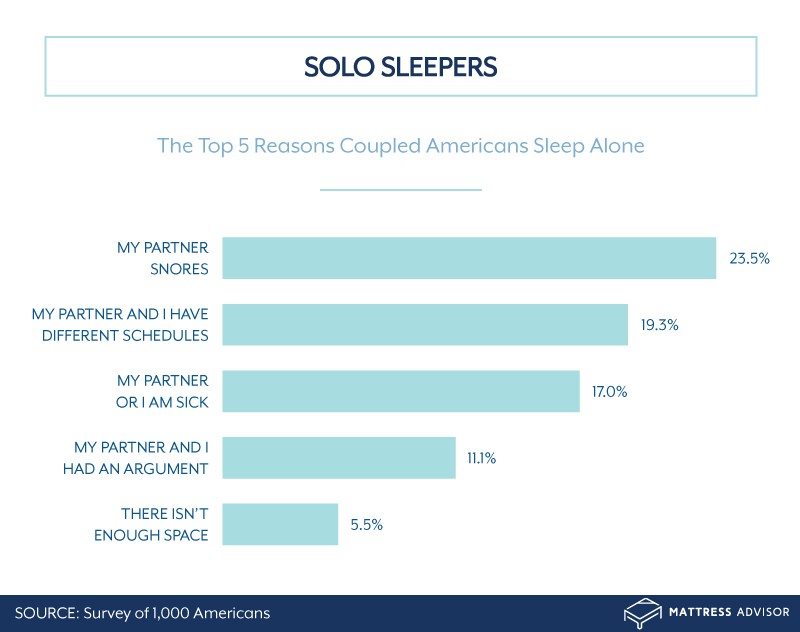 Improved Sleep in Any Position

As with many compatibility concerns at the beginning of a relationship, there’s no telling how your sleeping position preferences might differ from that of a partner. But as you experiment with sleep arrangements that work best for both of you, the essential tools for relationship success apply: cooperation and communication.

Our findings reveal how varied our favored positions can be and how they can incite intense emotion. But don’t let resentment build about how you share your bed with the one you love. By discussing your sleeping styles directly, you might save yourself some conflict – and get better rest as a result.

No matter how you choose to sleep beside your partner, no position will compensate for the discomfort of a poor mattress. Choosing the best mattress for one person is a delicate process, and meeting the needs of two people can prove even more complicated.

Let Mattress Advisor be your guide. With extensive and unbiased reviews, we’ll help you and your partner select the mattress that leaves you both in coupled bliss.

We collected responses from 1,000 Americans from Amazon’s Mechanical Turk. 40.9 percent of our participants were male, and 59.1 percent were female. Participants ranged in age from 18 to 73, with a mean of 35.9 and a standard deviation of 11.0. We weighted the data to the 2017 U.S. Census for age and gender.

No statistical testing was performed, so the claims listed above are based on means alone. As such, this content is purely exploratory and future research should approach this topic in a more rigorous way.

You’re welcome to share our findings and images – even if you have an audience of one (hint: your sleeping partner). We simply ask that you attribute us to our work with a link to this page. Whether you’re sharing a bed or this content, being thoughtful about all involved is always a good call.