The Evolution of Sleepwear

Take a look at how sleepwear has evolved over the years

In the world of rapidly changing fashion trends, sleepwear has seen a long and sometimes sleepy evolution. A number of new styles have popped up over the years, but many items have managed to maintain popularity for years, decades, or longer.

Though the changes may have been slow to take hold, our night time outfits have definitely come a long way from the days of stiff and long Victorian-era nightgowns to now, when we’re seeing forward-thinking companies design fashionable sleep get-ups intended for wear not only in bed but outside the home.

Read along as we guide you through some key moments and styles in the sleepwear evolution: 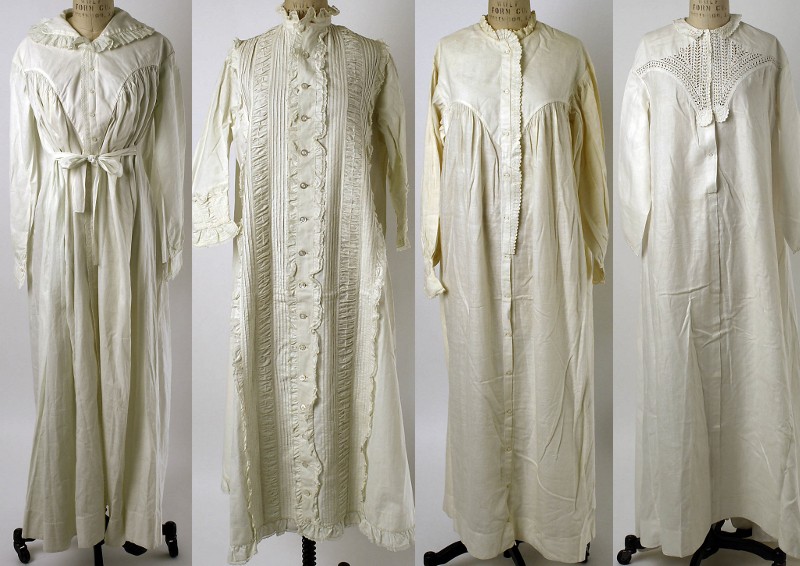 The English word pajama originates from the Persian word ‘pyjama’ or ‘pay-jama’ which references a style of loose pants that were tied at the waist. Pajamas first became common in the western world during the Victorian era when men started wearing them, though eventually women and children adopted the style as well.

Before pajamas, many people slept in their undergarments rather than wearing an outfit specifically created for rest. Sleepwear during the Victorian age was usually referred to as ‘night clothes’ and often consisted of ankle-length nightshirts or nightgowns and floor-length robes. Almost everything was white, especially when the style was first adopted (eventually colors and patterns became fashionable). At first formless, Victorian-era sleepwear eventually became quite stylish and was often adorned with lace, bows, and other intricate details. 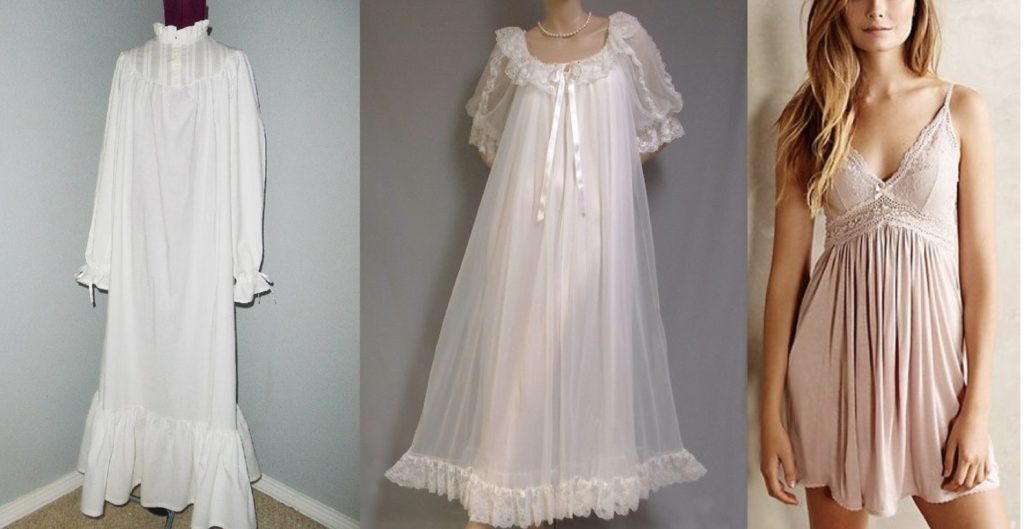 Nightgowns were popular during the Victorian era, but have managed to maintain their status as a sleepwear staple for many, even today. Victorian-era nightgowns ranged in style from casual to formal, and simple to complex. Some had sleeves while others were sleeveless, and many were adorned with lace, buttons, collars, and other intricate details. Initially worn by both sexes, they eventually became common mostly among women.

Today’s nightgowns are often shorter or more stylish, though the long, formless style still lives on—though these are often made in much softer fabrics than early nightgowns. 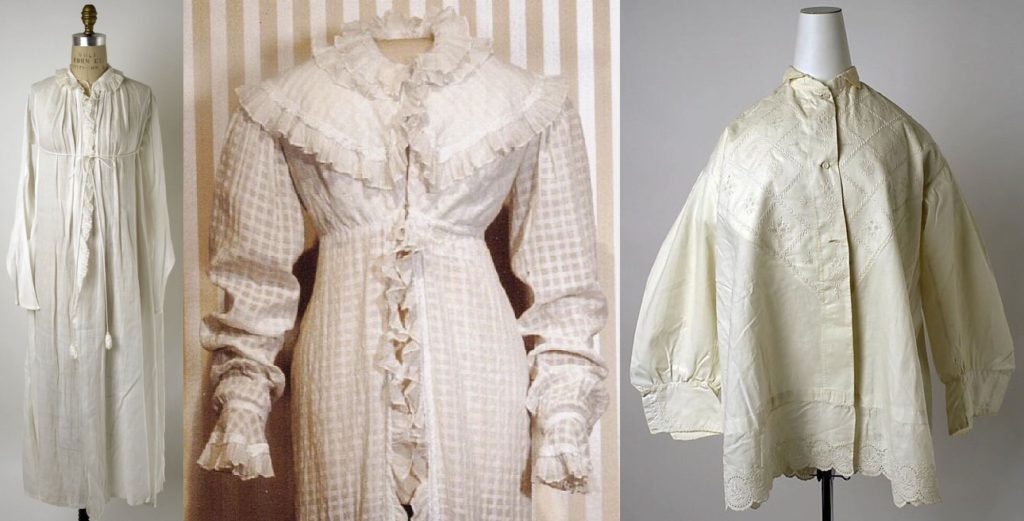 Night jackets were common in the Victorian era and were usually worn during the day’s cooler hours before bed or early in the morning. Sometimes they were used as a way to maintain a fashionable look in the evenings after changing out of day clothes. They were worn similarly to how many wear a sweatshirt or sweater today, but with a more formal twist.

Around this time, many wore dressing gowns in a similar way to night jackets, though these extended all the way to the floor. They were a bit like today’s bathrobes, but more formal and with the intent of wearing in public. 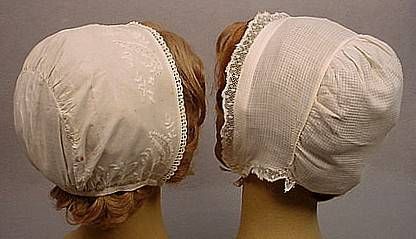 No, we’re not talking about a stiff pour of whiskey before bed. With a look similar to that of a bonnet, nightcaps were a popular sleepwear component throughout the 1800’s. Designed with a somewhat fashionable look for the time, the nightcap was, for most, all about functionality.

Usually only worn by those who could afford extra luxuries, nightcaps could be worn overnight to help preserve hair that was often only styled once each week. They were also used to hide bad hair at breakfast or other early morning activities that demanded being in the company of others before hair was really ready to go for the day. They were fashioned from a variety of materials, using lighter linens in the summer months and heavier fabrics for the cold days of winter.

Many women still wear a version of a nightcap to protect their hair while sleeping, though the styles have changed and it’s now more common to see a scarf than a bonnet. 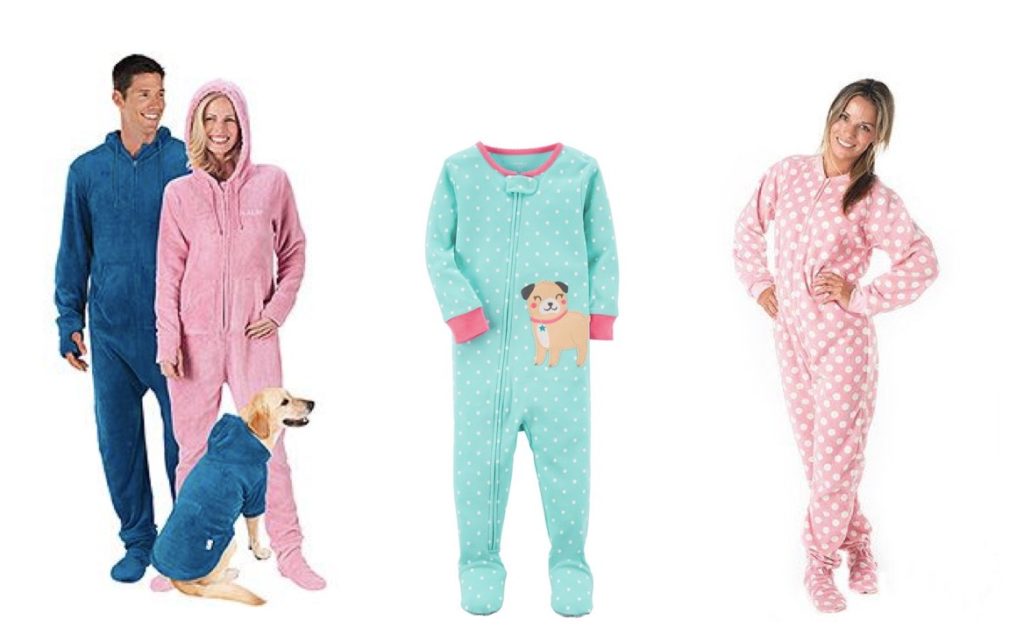 The concept of footie pajamas seems to have been first introduced by Doctor Denton Sleeping Mills in the 1860’s when they were called “blanket sleepers” and designed to keep people of all ages warm on cold nights. Made of warm, blanket-like material, the earliest footie pajamas snapped up with buttons and had vinyl on the feet to keep people from slipping.

It is believed the concept for footie pajamas came from the one-piece long underwear garments called “union suits” that were popular in the 1800s for keeping people warm in brisk temperatures. Footie pajamas rose in popularity again in the 1970s when they were marketed as a way to stay warm with less heat during the era’s energy crises. Their popularity continued on into the 1980s and beyond and are still worn today, though mostly by children. Among adults, they mostly invoke nostalgia. 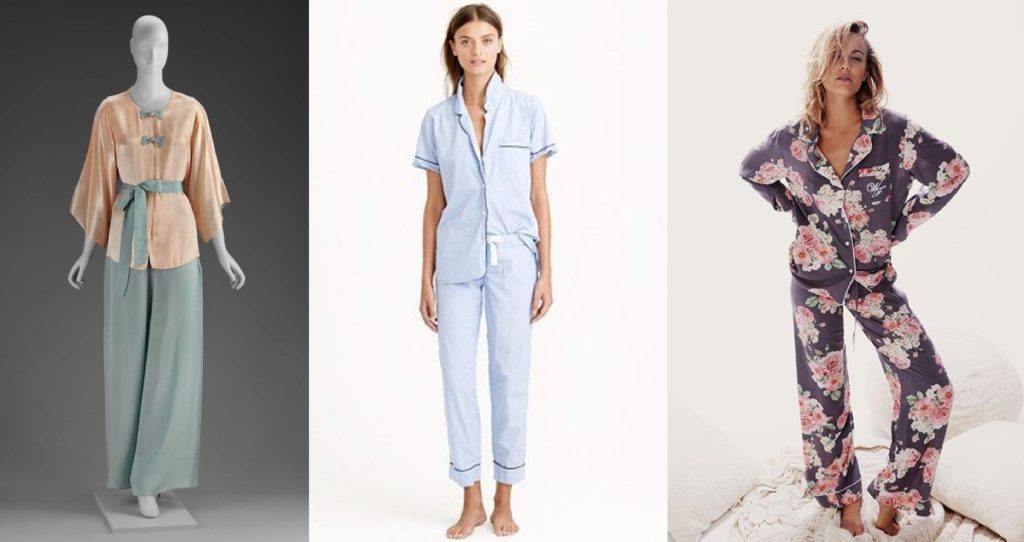 Men started transitioning away from earlier sleepwear styles in the 1920s in favor of more modern looking sleepwear sets. The modern pajamas at this time were usually made of silk and cotton and available in tons of colors and patterns including stripes, dots, and flannel. Initially made with long sleeves and full-length legs, shorter versions became common later.

Eventually, pajama sets became popular among women. This happened when designer Coco Chanel designed a set of sleepwear for women featuring elegant yet loose silk or cotton trousers and a matching top. Initially unexpected and somewhat shocking to many, this style became fairly popular by the middle of the 1920s. 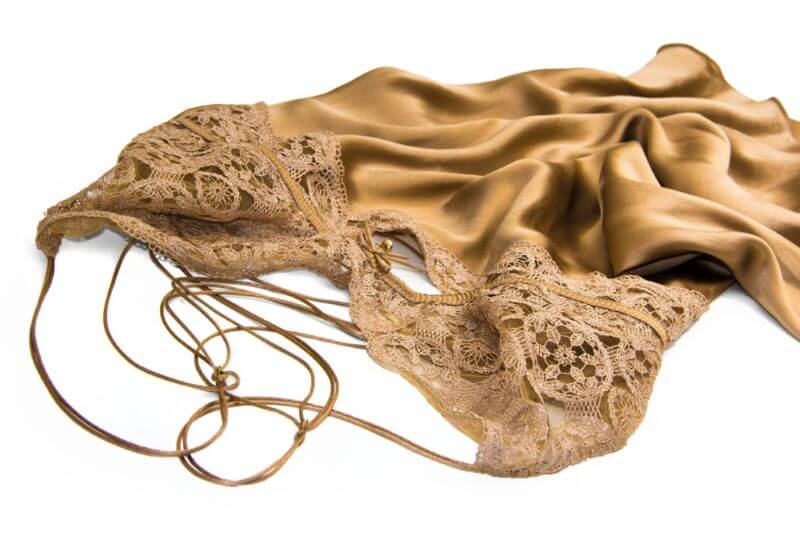 Negligees entered the sleepwear scene during the 1920s, with many designed to mimic the flapper-style clothing that was popular at the time. The earliest versions were a bit similar to a nightgown, but usually sheer or silky with lace adornment. Sometime around the 1940s, a shorter style of negligee became popular and as time went on, sexier styles developed.

Many women still wear these to sleep to this day. Lingerie sets consisting of a matching bra and underwear became a more common sleepwear option for women in the 1960s, and in some cases were paired with negligees. 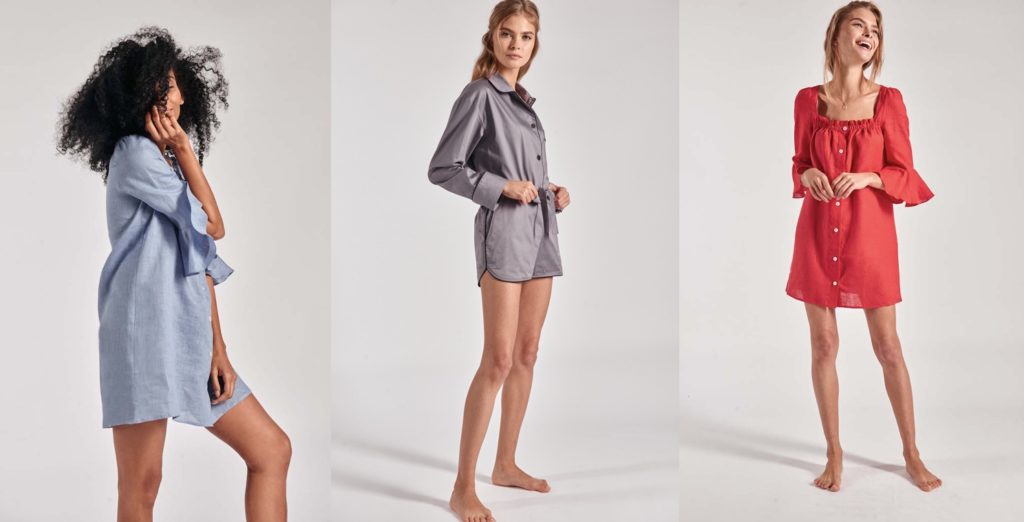 This trend of taking sleepwear beyond the walls of the home first emerged in the 1920s when fashion designer Paul Poiret fashioned a style of silk pajamas meant to be worn in public at any time of day or night. Later, in the 1940s, it became fashionable and trendy to add pockets to women’s pajamas as a place to store items in the event they wanted or needed to leave home during the evening.

Today, people are known to wear pajamas out of the home throughout the world in places from Japan to the USA, where it’s not at all uncommon to see people in sweatpants or other sleep bottoms as they shop at the supermarket or pick up a bite to eat on weekend mornings.

A fashion startup called Sleeper recently took this trend one step further by launching a line of hand-sewn pajamas meant to be worn far beyond the walls of the bedroom and into an office, the beach, or anywhere else. Crafting its sleepwear from eco-friendly and natural materials like silk and organic linen, Sleeper wants to give customers clothing that keeps them both comfortable and happy, and now sells its products for $200 or more in stores like Barneys, Opening Ceremony, and Harrods.

Styles range from silk slip dresses and linen sleepwear sets to a “robe dress” with ruffled edges, and actually look like something you might want to wear out of the home. In a recent Fast Company piece, Sleeper’s founders mentioned that they believe pajamas as everyday wear is a fashion trend that’s here to stay.

CATCHING ON TO THE TREND

Other brands are tapping into the ‘sleepwear outside the home’ trend, too. British clothing company Three Graces London designs pajamas that busy women can wear anywhere from sleep to a fancy dinner. Bed to Brunch is on the same page, designing multifunctional sleepwear that’s good to go when you’re ready to leave home, no outfit swaps necessary. And CLC by Corey Lynn Calter designs many of its sleepwear items as pieces that can, and should, be worn out of the home. The brand even includes suggestions on its product pages for how to wear and pair its sleepwear for people looking to use it beyond the bedroom.

Still, the question remains: how many people are actually going to roll straight out of bed and off to work in the same outfit? For now, fashionable sleepwear seems to be moving into position as the next big thing. But who knows what trends are waiting on the horizon. 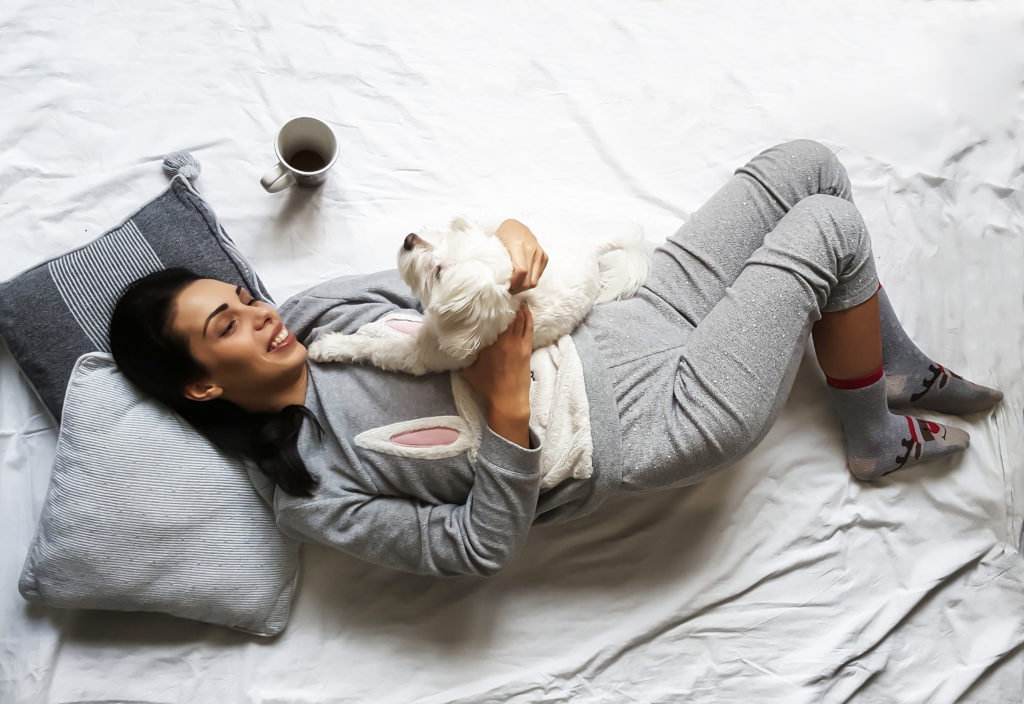 Flannel, cotton, fleece, and silk all make great materials for warm pajamas. See our top picks so you can stay warm in your sleep. 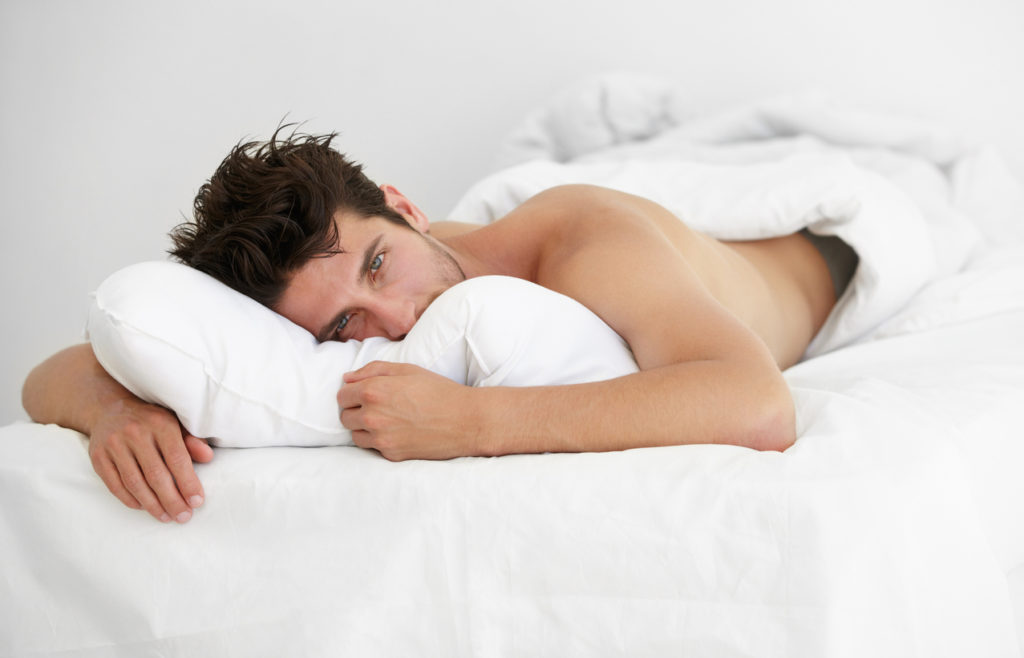 Should You Be Sleeping Naked?

Should you be stripping before bed? Sleeping naked brings with it a whole host of health benefits, including better sleep, better metabolism, a more active sex life, healthier relationships, and more perfect private parts. Read on to learn more.