Exploring the intersection of sleep and success

Is sleep a luxury or a necessity to succeed?

We surveyed over 1,000 employees to understand how they define “success” and the role sleep and energy play in achieving it. Read on to see our findings.

Perceptions of sleep deprivation and successQuality vs. quantity of sleepHow people measure successSleep vs. successGiving up sleep to get ahead

Most experts agree that the secret to success, whether in life or business, is getting enough sleep. Except, of course, according to high-profile CEOs and business owners who say they’re so busy being successful they don’t have time to sleep.

Take the very public debate between Arianna Huffington (HuffPost) and Elon Musk (CEO of Tesla) that occurred over the internet in August 2018 as an example. In an open letter to the recently erratic Musk, Huffington called out the tech giant for perpetuating wildly unhealthy work habits. In a similarly broadcasted response, Musk replied that the 120-hour workweeks he puts in at Tesla aren’t an option or even a preference – they’re a necessity to ensure his brand stays profitable.

So where is the truth? Is sleep a luxury or a necessity to succeed? Mattress Advisor surveyed over 1,000 employees to understand how they define “success” and the role sleep and energy play in achieving it. Should you clock in more sleep hours or put in as many hours as necessary to get the job done, regardless of what it might do to your body? Read on to see what we uncovered.

The Sleep Behind Success

Studies suggest the average adult needs anywhere from seven to nine hours of sleep every night (and even more when you’re younger) to maintain a healthy lifestyle, but sleep is often shoved aside when people need more time during the day to get everything done. 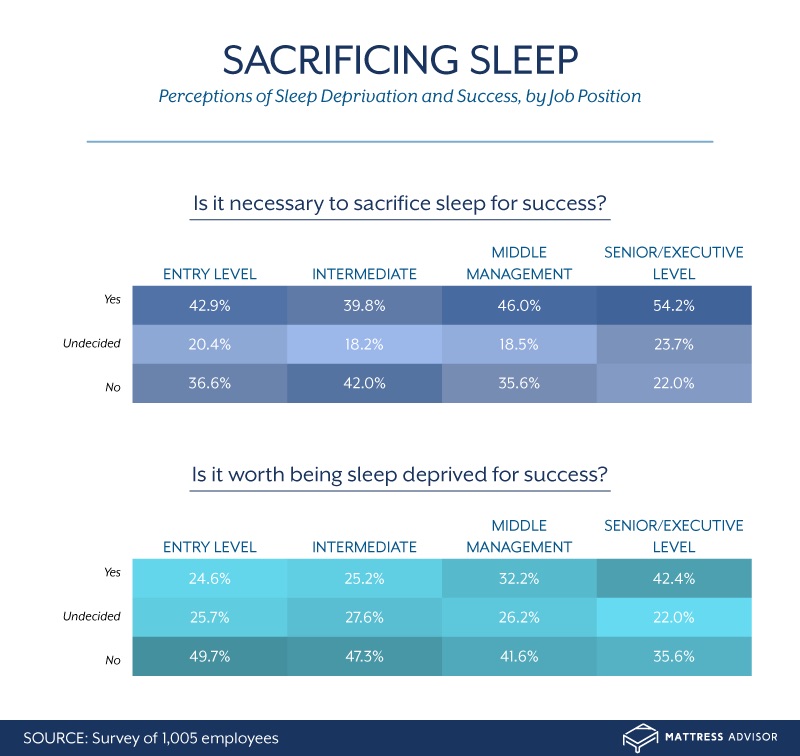 Except for entry-level employees, people occupying higher positions within their company were more likely than those in subordinate roles to suggest sacrificing sleep was a necessity. Compared to about 40 percent of intermediate employees, roughly 54 percent of senior managers said giving up sleep was a part of getting ahead.

People in middle management (32 percent) and senior or executive roles (42 percent) were also more likely to say feeling sleep deprived was worth achieving success than people lower in the work hierarchy. Entry-level employees (who were more inclined to agree that sleeping less was a part of success) were more likely to feel losing out on rest wasn’t worth it in the end.

Establishing healthy sleep habits isn’t just about making sure you’re clocking in the recommended number of hours; it’s also about establishing a routine you can stick to on a regular basis. Because our bodies crave the consistency, committing to a specific schedule will become natural over time, and having a formal bedtime will help influence your energy levels throughout the day. 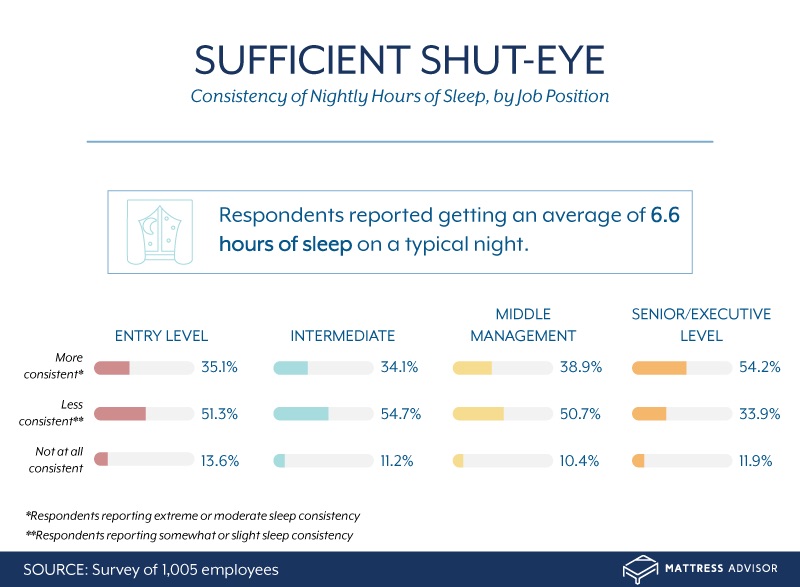 Even though people who were in higher roles at their companies (either middle or senior management) were the most likely to give up sleep and feel it was worth it to get ahead, they at least recognized the importance of a consistent sleeping pattern compared to entry-level and intermediate employees. Where 54 percent of people in senior management reported more consistent sleeping patterns, only 35 percent of entry-level employees did the same. Some of the most successful CEOs in the world have strict daily habits, and they usually involve going to bed and getting up at the same times every day.

Measuring Achievement: What is Success?

Success is a fairly subjective term, with its definition changing from person to person. Money and power are simple ways to quantify being good at what you do professionally, but they aren’t always the end-all-be-all when it comes to how we measure our work. To better understand the relationship between sleep and success, we explored the factors people used to measure their personal success. 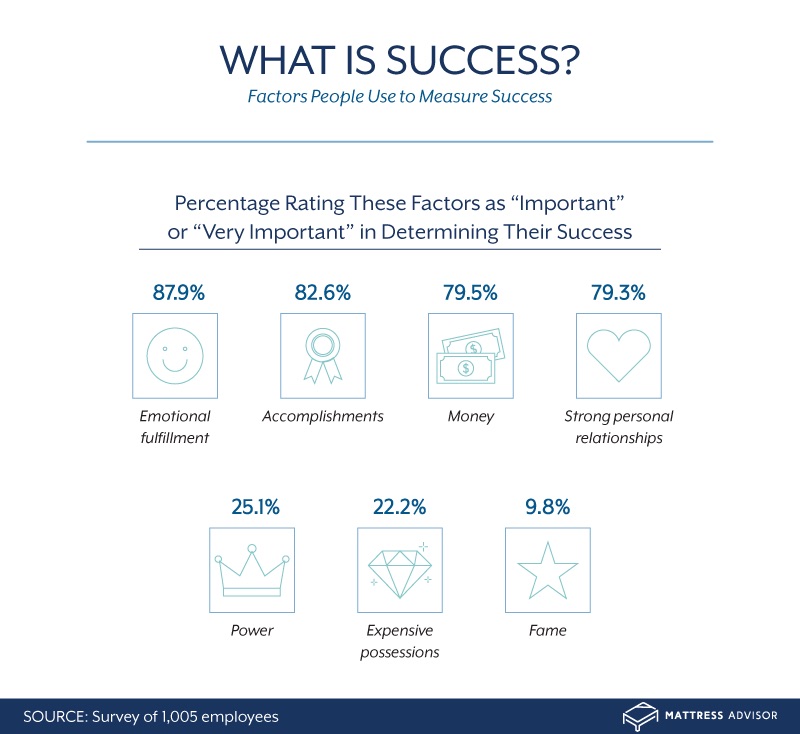 Interestingly, money wasn’t the first or second most common factor people used to define feeling successful. Compared to monetary compensation (less than 80 percent), nearly 88 percent of people ranked emotional fulfillment as their leading criteria for success, followed by their overall accomplishments (nearly 83 percent). Emotional fulfillment may have earned higher marks because it could be more difficult to find than jobs that pay well. Even just understanding what you’re passionate about isn’t always a straightforward task, and turning it into profitable work can be even more challenging.

Do You Have to Choose One or the Other?

Would people take more sleep over success or skimp on sleep in exchange for greater success? Most people know the difference between a good night’s sleep and waking up on the wrong side of the bed. The quality of our sleep is often dictated by a variety of external factors including how quickly we fall asleep and whether we wake up at multiple points throughout the night. 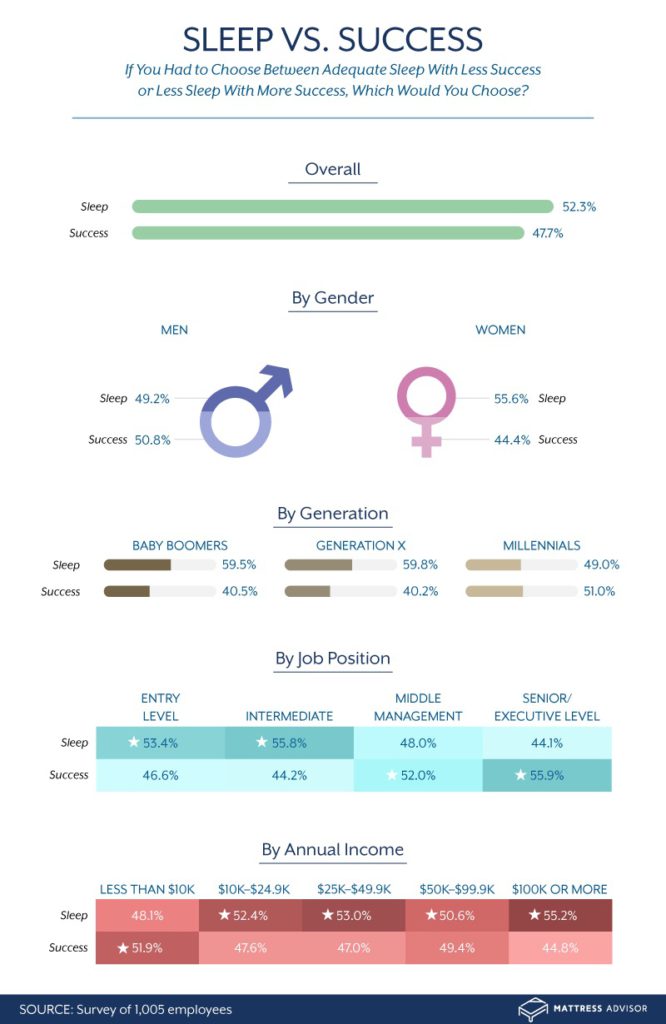 The general consensus was that sleep trumped success. Of course, that wasn’t true for everyone. Compared to women, where nearly 56 percent of respondents opted for adequate sleep over success, nearly 51 percent of men were willing to give up R&R for success.

While sleep was less of a concern to people in higher-level positions (including middle and senior management), it was millennials compared to baby boomers or Gen Xers who voted for resting less for more success. Considering millennials are expected to make up 50 percent of the total workforce by 2020, if this pattern holds true, sacrificing sleep to get ahead could become a standard rather than the exception.

Putting Your Sleep Where the Money Is

Without the immediate gratification of more money or a promotion, it might be hard to resist the temptation to smash the snooze button a few times before actually getting out of bed. We asked our respondents just how much sleep they’d be willing to give up if it meant getting ahead at the office.

Respondents averaged roughly 6.6 hours of sleep every night but said they could get as little as 5.5 hours of sleep and still function the next day. But what if there were an extra $10,000 or $25,000 at stake? Given the opportunity to pick up a five-figure raise, men and women were willing to give up anywhere between 1.6 and 2.4 hours of sleep a night. Even though you can get sick, not think properly, or gain weight from a lack of sleep, people were willing to sleep only 4.2 hours to take home an extra $25,000.

In most cases, money was worth more to men and women than a title or power. Having more authority around the office wasn’t even worth a full hour of sleep, and being the CEO of a Fortune 500 company was worth less to women (1.4 hours) than to men (1.9 hours).

While men and women were only willing to give up an hour of sleep to get a $5,000 raise at work, women were willing to sacrifice more (1.2 hours) if it meant they could work from home once a week. For some people, the benefits packages at work can be more enticing than a base salary and may be worth the hypothetical sacrifice where sleep is concerned.

For many people, there’s more to success than the money taken home at the end of the week. Emotional fulfillment and accomplishments were more valuable to most working professionals. Still, those who were in higher positions were more likely to agree that sacrificing sleep was necessary to be successful. This trend may also be on the rise among young professionals, as we found more millennials were happy to give up sleep to chase their dreams.

Regardless of how many hours of sleep you can fit into your schedule, there’s more to a quality night’s rest than going to bed and waking up on time. Your mattress matters, and at Mattress Advisor, we want to make sure you have the best when it comes to protecting your health and achieving your goals. Take our Mattress Finder Quiz to see which brands work best for you, read through our comprehensive buying guides, and compare all the best options before you buy. No matter how much sleep you get at night, make the most of it.

We surveyed 1,005 people using Amazon’s Mechanical Turk. Respondents had to report currently being employed as a salaried or hourly worker to qualify for the survey.

Respondents were 50.9 percent women and 49.1 percent men. The average age of respondents was 35.6 with a standard deviation of 10 years.

Parts of this project involve the current job positions of respondents. The sample sizes for those groups are as follows:

The senior management and executive groups were combined in our representation of the data due to lower sample sizes in those groups.

When reporting their opinions on whether sacrificing sleep was necessary for success and whether it was worth being sleep deprived for success, respondents were given the following scale:

This scale was then combined into three groups: yes, undecided, and no in the final visualization of the data.

When reporting the consistency of their nightly hours of sleep, respondents were given the following scale:

All averages presented in the portion of the project about how many hours of sleep people were willing to give up for various incentives were calculated to exclude outliers in the data. This was done by multiplying the standard deviation by three and adding that amount to the initial average. All data points above that sum were then excluded.

All the data in this project were self-reported. Some common issues with self-reported data are selective memory, telescoping, attribution, and exaggeration. This is particularly problematic when looking at the reported amount of sleep people would be willing to give up for various incentives. It’s possible that respondents exaggerated the amount of time they’d be willing to sacrifice.

Additionally, we performed no statistical tests on the data collected for this project. This study was conducted purely for exploratory purposes and should be treated as such. Future research should be more rigorous and try to control for the issues mentioned above.