You may have noticed a new internet video craze – one that doesn’t involve cats. It’s calming. It’s soothing. It’s… a bit strange.

It’s called ASMR, and there are over 13 million of these videos on YouTube today. These Youtube videos that are getting millions of views feature soft-spoken hosts doing a variety of things that cause relaxing “tingles” in their viewers, and those who experience it, swear by its sleep-inducing power.

ASMR stands for Autonomous Sensory Meridian Response (ASMR). This is a triggered experience involving a tingling, euphoric sensation that typically starts on the scalp and moves down the back of the neck, through the upper spine. Many have likened it to when someone plays with your hair, but with simple audio and video triggers.

The makers of these videos are known as ASMR artists, and they specialize in knowing specific triggers for their viewers. Many of them, like Lily of Lily Whispers ASMR, became ASMR artists because they experienced ASMR and felt the pleasurable sensations for themselves.

After watching her first ASMR video, Lily says, “I instantly got hooked, took an incredible nap and then two or three months later I decided I wanted to make my own ASMR channel.”

What Happens in ASMR Videos?

To the uninformed eye, these videos can appear a little strange. Who would ever want to watch 30 minutes of someone whispering into a camera or tapping a microphone?

ASMR videos are as varied and unique as the ASMR artists themselves. Lily’s more than 200,000 subscribers come to her Youtube channel to have personal attention in the form of whispered makeup sessions or soft-spoken roleplay.

“It’s mostly inspiration from real-life,” says Lily, “People kept commenting that I look like Kylie Jenner so I made a Kylie Jenner roleplay.”

In essence, ASMR videos are binaural recordings designed to be heard through headphones. This means the sound is captured with two microphones simulating the way humans actually hear. The viewer feels like the person on camera is talking in each ear, besides them, or even behind them.

The theme of each video typically revolves around specific triggers including whispering and other things like:

The personal attention category is where you’ll find things like role play where the artist will simulate providing things like general medical exams and massage sessions. People feel soothed by the attention and calming presence of these video creators.

It’s a similar feeling many reported while watching episodes of “The Joy of Painting” with Bob Ross.

Was Bob Ross an ASMR Artist?

He sure was. The iconic painter was unknowingly the first ASMR video creator. His soft and gentle voice paired with the swiping of his brush and the tapping of the canvas created an experience chock-full of triggers.

For years, people have used his docile tones to lull themselves to sleep. “People back in the day were too shy to tell him they fell asleep listening to him,” said Joan Kowalski, the President of Bob Ross Inc, “They thought it would insult him.”

Would you be able to tell that sweet, afroed man that you snoozed through his happy cloud creation?

He knew, though, according to Kowalski. Now that we’re all coming clean, the mindfulness app “Calm” is adding Bob Ross audio to their programming to help users relax.

Does ASMR Really Help You Sleep?

While there hasn’t been much scientific research done on the effects of ASMR, many people who experience ASMR report that it helps with their depression, chronic pain, anxiety, and sleep.

“I recently had a woman tell me her 2-year-old is on oxygen and my videos helped him fall asleep,” says Lily, “I’ve also had people pour their hearts out to me in the most humbling emails about how my content has helped them through trauma and depression.”

In 2015, the first peer-reviewed study on ASMR was published. A graduate student at Swansea University in Wales partnered with a lecturer and conducted a survey of 500 ASMR enthusiasts. Their findings revealed that 82% of the participants watched these videos to help them relieve stress and fall asleep.

A larger survey is currently being conducted by Dr. Craig Richard at Shenandoah University. It’s had more than 19,000 responses from over 100 countries. Many reported feeling a deep relaxation or euphoria, but 60% of respondents said they ultimately felt sleepy.

How Does ASMR Work?

That’s a tough one. Since everyone experiences ASMR in a different way, it’s hard to nail down why the tingling sensations happen.

There is a theory that this feel-good sensation has to do with the release of hormones. It is thought that ASMR triggers release oxytocin causing relaxation and increased sensitivity to endorphins.

The pineal gland then releases endorphins that bring about that euphoric tingling. Finally, the pituitary gland produces serotonin to elevate your mood and induce sleep.

ASMR is Not for Everyone

ASMR videos may appear really odd especially if you don’t feel the sensation, and that is the case for many.

Some people just don’t feel the head tingles, but there are lots of videos to help you tap into it. If nothing else, they’re meditative and relaxing.

If you’re looking to ASMR videos to help you find your best night’s sleep, Lily advises, “Do all the things that make you cozy. It’s different for everyone.”

So hop into your comfiest pajamas, turn the cell phone down to the warmest, lowest light, pop in your headphones, and see if you get the ASMR tingles before drifting off to sleep.

Disclaimer: All ASMR videos should be viewed using headphones.

If you have a favorite ASMR artist, video, or technique that helps you catch your ZZZs, let us know in the comments below!

What are binaural beats and how can they help you sleep better? Read this guide to see if this could be a simple solution for better sleep. 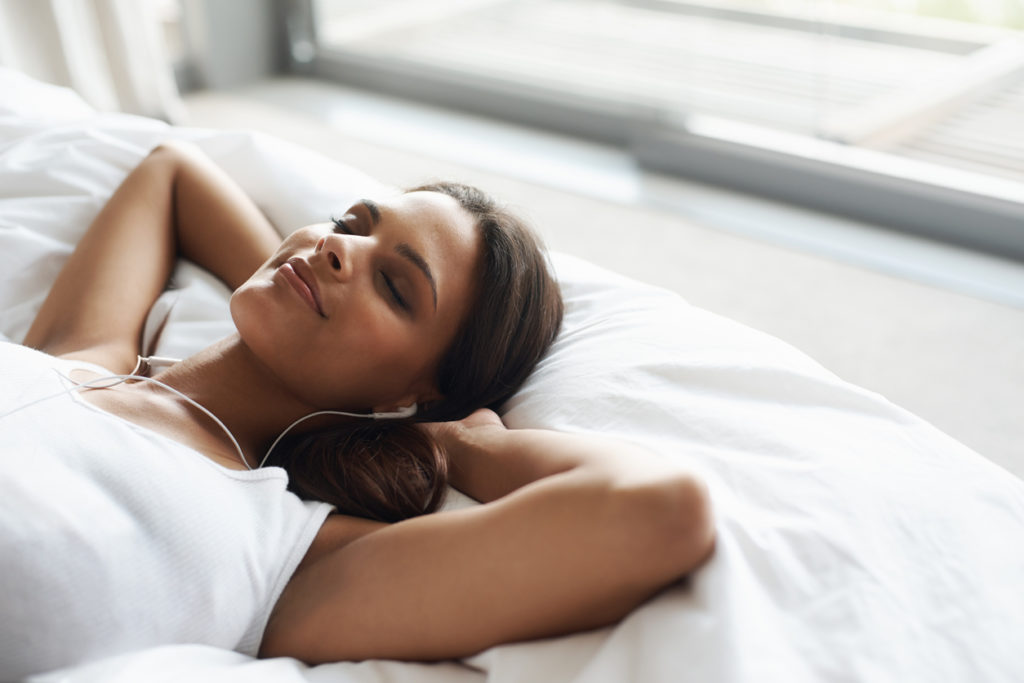 Sounds to Fall Asleep To

We scraped 20,000 Spotify playlists related to sleep and relaxation to learn which artists and songs soothe listeners most often.