How the brain controls our sleep/wake cycle 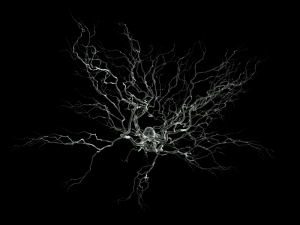 As we have seen in the earlier section on the Two-Process Model of Sleep Regulation, the timing of the activation of these various different processes results from the interaction between the increasing homeostatic drive to sleep and the changing influence of our internal circadian clock.

What Parts of the Brain Control Sleep/Wake Cycle

It used to be thought that the brain had a specific “sleep centre” (in the hypothalamus) and a separate “wakefulness centre” (in the reticular activating system in the brainstem), but more recent research has indicated that the situation is actually substantially more complicated than that: wakefulness actually appears to be regulated by a whole network of redundant structures in the brainstem, hypothalamus and basal forebrain, and is not centred in any one part of the brain.

The ventrolateral preoptic nucleus (VLPO or VLPN) of the hypothalamus is one area of the brain that is particularly involved in the switch between wakefulness and sleep. Neurons in this small area help to promote sleep by inhibiting activity in areas of the brainstem that maintain wakefulness.

Likewise, in a process of “mutual inhibition“, during waking hours, those areas of the brain that are active in maintaining wakefulness by stimulating the cerebral cortex also work to inhibit the neurons of the VLPO.

For this reason, the VLPO is often referred to as the “sleep switch”, although this is really a gross simplification. In fact, several different simultaneous and interactive processes are involved – some of which are described below – and there is as yet no single unifying theory that describes all their interactions.

It sometimes seems that the more we discover about the complex physiological and neurological mechanisms of sleep and wakefulness, the more complications and interactions come to light, and the more questions arise. 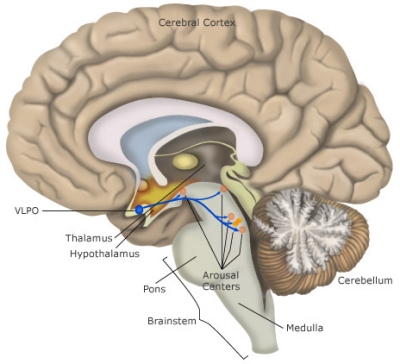 A whole cocktail of neurotransmitters are involved in driving wakefulness and sleep, including histamine, dopamine, norepinephrine, serotonin, glutamate, orexin and acetylcholine, among others.

While none of these neurotransmission processes is individually necessary, they all appear to contribute in some way.

The Role of the Thalamus

When sleep is called for, the normal signals of wakefulness are interrupted at the thalamus, which serves as the “gatekeeper” to the cerebral cortex (the furrowed outer layer of the brain where most conscious activity takes place), effectively disconnecting the cortex from most internal and external signals.

It is largely the thalamus that imparts the regular slow brain waves of deep slow-wave sleep to the cortex, rather than the more unsynchronized cortical firing typical of the waking state and REM sleep.

It has been shown that a damaged thalamus seriously interferes with sleep, and there is a very rare sleep disorder called fatal familial insomnia (FFI) in which malformed proteins called prions attack the sufferer’s thalamus, which effectively makes sleep impossible and which is in fact quite as fatal as its name suggests. 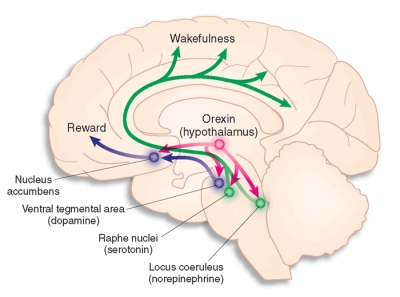 REM sleep in particular is regulated in a very specific part of the pons region of the brainstem, where a population of neurons are selectively active during REM sleep, even if disconnected from practically all of the rest of the brain.

At the same time as acetylcholine neurotransmitters activate this part of the brainstem, two other areas in the pons are simultaneously inhibited in order for REM sleep to occur. Inhibitory signals are also sent from the pons to the spinal cord to bring about the temporary atonia or muscle paralysis that is characteristic of REM sleep.

As a result of this, the release of neurotransmitters such as norepinephrine, serotonin and histamine, which normally stimulate motor neurons to create muscle activity, is completely shut down.

Switching from Sleep to Wakefulness

The switching between non-REM and REM sleep during each sleep cycle is regulated by several complex interactions between various “REM-on” and “REM-off” neurons, employing different neurotransmitters in various different regions of the midbrain and hind-brain, all of which are necessary for the various characteristics of REM sleep to play out.

As described in the section on Sleep-Wake Homeostasis, the homeostatic pressure to sleep is largely regulated by a neurotransmitter and neuromodulator called adenosine, which builds up throughout the day, and acts to inhibit many of the processes associated with wakefulness.

During the night, after the body has received a certain amount of restorative non-REM sleep, adenosine levels start to decline. At this point, the systems responsible for wakefulness start to become more active (i.e. become less inhibited by adenosine), and conditions gradually become more favourable to awakening.

Small cell-signaling protein molecules called cytokines (such as interleukin and interferon, among others) are also involved in this process to some extent.

Cytokines are chemicals produced by our immune systems while fighting an infection, but they are also powerful hypnogenic chemicals, which is why infectious diseases like the flu tend to cause sleepiness. It is thought that sleep may help the body conserve energy and other resources that the immune system needs to mount an attack on diseases.

Even more importantly, serotonin is used by the body to produce yet another hormone, melatonin, sometimes called the “ sleep hormone”, which is a major regulator of our circadian or internal clock.

Melatonin is converted from serotonin in the pineal gland in the brain, under directions from the body’s internal circadian clock (it can also be bought over the counter as a sleep medication).

Melatonin production increases in the evening, chemically causing drowsiness and helping to lower body temperature, and then decreases back to its normal negligible daytime levels by the early morning. 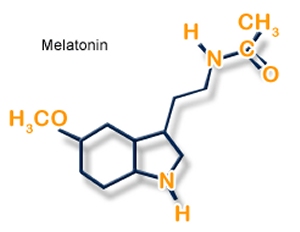 Melatonin production is inhibited by light (and therefore stimulated by lack of light, or darkness), and so it effectively provides a kind of internal representation of the external light conditions. In non-equatorial regions, it also encodes the seasons to some extent, as night length changes throughout the year, which some animals use in their mating practices.

However, it is not completely clear what exact sleep function melatonin carries out, especially considering that nocturnal animals like rats and hamsters also secrete melatonin at night, which is their active phase, suggesting that melatonin itself may not have any direct effect on sleep or alertness.

Towards the end of the night, the secretion of the stress hormone cortisol begins to increase in preparation for the anticipated stress of the day, usually capped by a particularly large increase (up to 50%) about 20-30 minutes after waking, known as the cortisol awakening response.

What Your Brain Does While You Sleep

This cycle will take around 90 minutes. After you complete your first full sleep cycle, it will start over again.

The Brain Benefits of Sleep

Sleep benefits the health and function of your brain in two primary ways.

Sleep is critical for memory. The National Sleep Foundation includes aspects of memory as three of the top five things that happen in the brain as we sleep. During sleep, we form new memories, consolidate memories, preserve existing memories, and shed memories deemed unimportant.

Sleep is central to both our short term memory and our long term memory. Without sufficient sleep, our learning potential suffers. As a result, we can experience trouble remembering things like where we put our keys or the name of someone we recently met.

Sleep Allows Toxins to Be Cleared from Our Brains

As our brains work hard during the day, they accumulate waste products that need to be cleared out. According to animal research, this cleanup happens during sleep. Thus, getting adequate sleep may help to keep your brain healthy and working well.

Related: Why do we sleep

There are many sleep disorders that can influence sleep. They range from narcolepsy, which results in excessive fatigue, to insomnia, which makes it hard to get enough sleep. Sleep researchers are hard at work learning more about sleep and sleep disorders in order to help people get the sleep that they need. If you struggle with a sleep disorder, talk to your doctor or see a sleep specialist to help protect your brain’s health.

Research in sleep medicine continues to explore the important neurological mechanisms that occur while we sleep and the role our brain plays in our sleep patterns. We have come a long way in identifying which key parts of the nervous system affect our sleep, but there is still more to learn about the memory consolidation processes, the stages of sleep, and circadian rhythm sleep disorders like jet lag. 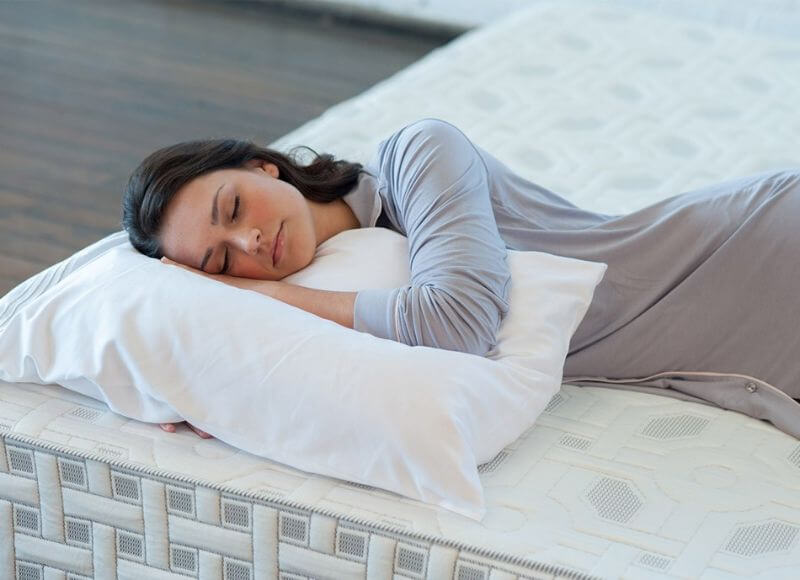 The Two-Process Model of Sleep Regulation

The sleep-wake cycle is regulated by the two-process model of sleep. Find out more about this model, who discovered it, and how it works.

Sleep-wake homeostasis is a kind of internal timer or counter that generates sleep drive. Learn more about this function and how it affects your sleep.

Melatonin: The Role it Plays in Sleep

Learn about the role melatonin plays in sleep and the best ways to regulate this hormone.